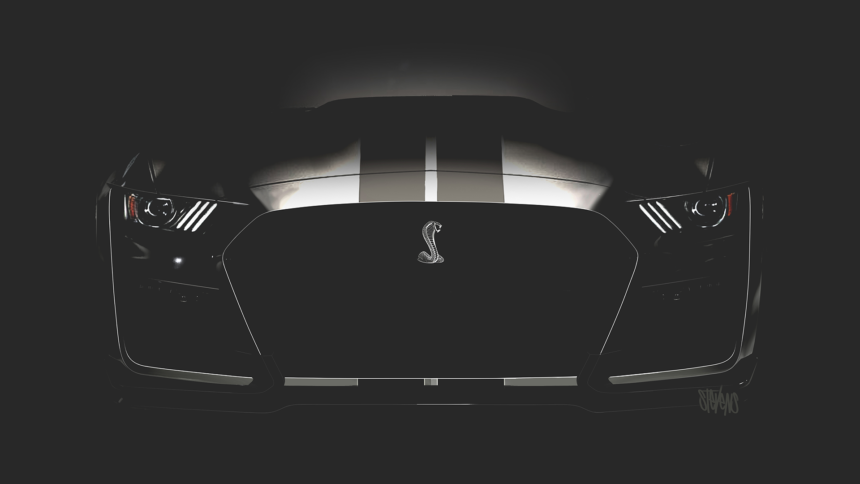 The Geneva Motor Show may almost be over (click here if you missed it), but that isn’t stopping Ford from teasing its most powerful production car ever from the other side of the globe. Say hello to the mean visage of the upcoming Shelby GT500.

At a press conference in Michigan yesterday, the Blue Oval shared plenty of hybrid/electric plans — yes, including a Mustang Hybrid. But it wasn’t all about charges and range, as the Dearborn marque showed off the lone image up top.

With a massive hexagonal opening that wouldn’t look out of place on the nose of an Audi R8, the new GT500 looks like it means business. In recent Mustang fashion, it’s a slow-drip in terms of details. For now, all Ford has said is that the car will boast more than 700hp, courtesy of a supercharged V8.

Interestingly, it seems to keep the pre-facelift headlights, just as the GT350 does. It’s hard to tell given the angle and lighting, but the GT500 also appears to adopt a wider stance too. Given the roughly 200hp jump over its baby brother, we’d wager it’s needed.

The last GT500, produced until 2015, had 662hp to its name. Since then, the Camaro’s adopted the 650hp supercharged V8 from the Corvette. Meanwhile, the Challenger went wild with the 707hp Hellcat before going completely bonkers with the 840hp Demon.

When will we see the new GT500? Don’t count on it for a while; the New York Auto Show starts at the end of the month, but Ford’s focusing on the reborn Mustang California Special there. The LA Auto Show might be a better bet: it kicks off November 30.