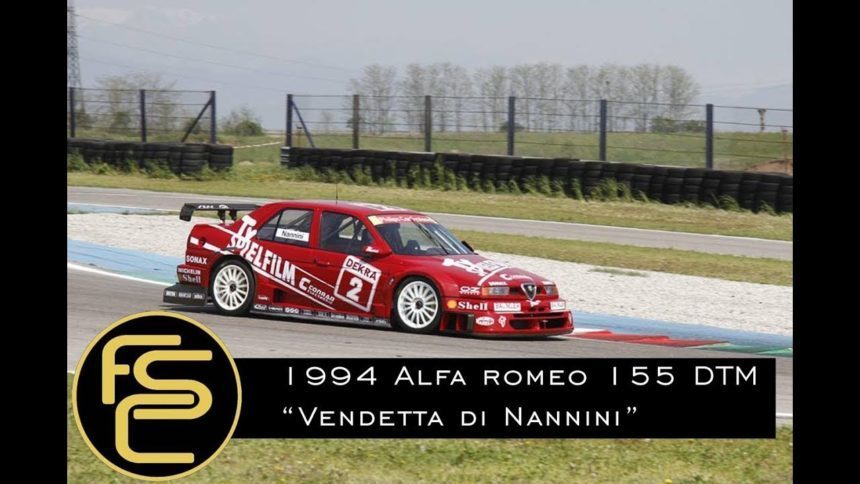 This Alfa Romeo 155 TI DTM Invokes the ‘Revenge of Nannini’

During the late ’80s and well into the ’90s, the Deutsche Tourenwagen Meisterschaft (DTM) was one of the premier touring car series. Several iconic cars dominated the series, and many of them even found their way into the sim racing world. For this week’s Want, we take a look at one of those cars, the Alfa Romeo 155 TI DTM.

The Alfa 155 began life in 1993 under its factory racing team Alfa Corse. However, a few other private teams used the car as well. But the real development was with the factory team and its drivers Alessandro Nannini and Nicola Larini.

Like all DTM cars, the 155 TI was built to FIA Class 1 specifications. At its heart sat a 2.5-liter V6 capable of some insane revs. The redline for the car was around 12,000rpm and is probably the best sounding six-cylinder ever made.

In addition to the high revving ability, it also packed 420hp and 215lbft of torque. With its lightweight carbon fiber chassis and AWD, it all added up to an impressive race car.

That engineering prowess showed early on too. For the ’93 season, Larini drove his 155 to claim the championship over the rival Mercedes-Benz C-Class. In addition to the driver’s championship, Alfa also claimed the manufactures championship that year too.

Then came the 1994 season and where we find the subject of this week’s Want.

Throughout the season Alfa and Mercedes battled each other right down to the very end. However, one famous incident occurred during the second-to-last race at the Alemannenring in Singen, Germany. 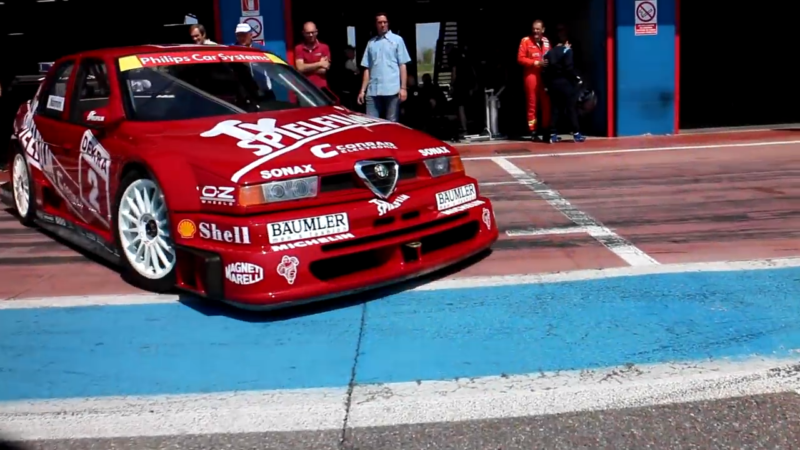 During the first race, Nannini was hit by a fellow 155 TI on the track. This sent him into the tires and ended his race.

For the second race, with the championship still on the line, he used teammate Giorgio Francia’s car. During this race, Nannini started in dead last but quickly worked his way up the field. Between driving the wheels off the 155 and a little luck from other cars breaking down, Nannini found himself in fourth before too long.

In fourth and while negotiating the tight 180-degree hairpin, Nannini’s 155 was bumped by Roland Asch in his AMG Mercedes. Whether intentional or just a lapse in judgment, we don’t know, but it ended up spinning Nannini out and ruining his shot at the championship.

This is where the infamous “Vendetta Di Nannini” enters the picture.

After getting back on track, Nannini pits and gets a set of fresh tires. Climbing back up the ranks though wasn’t on his mind; he was out for revenge. After a few more laps Nannini caught up to Asch and positioned his car directly behind him.

Then came one of 90 degree turns on the Alemannenring. While Asch slowed for the corner, Nannini didn’t and instead kept his foot on the pedal. The Alfa smashed into the rear of the AMG causing both cars to veer off into the overrun area.

With both drivers out of the running, Asch’s teammate Klaus Ludwig claimed the 1994 championship.

With a full restoration, it’s now back to its former glory and offered up for sale by Eric Broutin on Racecarsdirect.com.

Currently, there’s no price listed for the car, but Broutin does have a history of selling some pretty high profile cars. Due to this, we can’t imagine this 155 is cheap. Looking at previous examples, we put this car right around the $300,000 mark.

We know this Alfa lacks the same clout as Aryton Senna’s F1 car we looked at a few months back. But it’s still a piece of touring car history and comes from one of its most famous incidents.

Accompanying the ad is a video that breaks down the entire incident, if you want to check it out we’ve included it below: