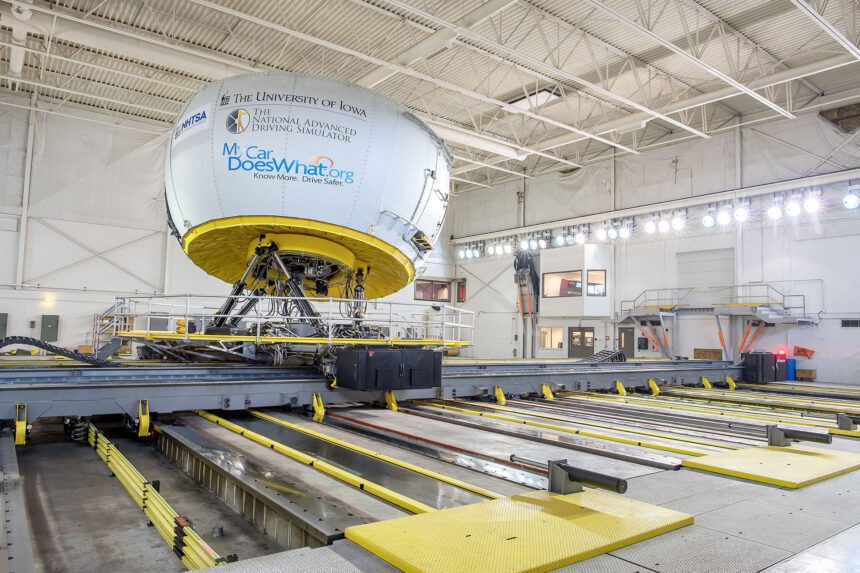 If you’re a serious sim-racing enthusiast, there’s a good chance that what you use to play is worth as much as a used car. Steering wheel peripherals, driving rigs, and even TV screens will all set you back a fair wedge, but it’s safe to say that the University of Iowa has you beat. Its driving sim comes in at a cool $80m.

The sim is part of a transport safety research facility based at the university’s college of engineering. Operating under the name of the National Advanced Driving Simulator (NADS), the center operates two simulation rigs called NADS-1 and NADS-2, along with some road facilities. Of the two, it’s NADS-1 that’s the most advanced.

Based in its own 13,000sqft warehouse, the NADS-1 simulator is a giant, 24-foot bubble. This is large enough to fit most cars and small commercial vehicles inside, with room to spare, precisely because it does. Each vehicle is hooked up to electronics, allowing normal operation of almost all controls, and translation to the simulator’s response mechanisms.

The car chassis sits on four independent actuators, which send vibrations through the vehicle to simulate different types of road surface. Meanwhile an array of 16 LED projectors, each sending a 1920×1200 image, display the environment around the inside wall of the dome. That gives a 360-degree view, with 40 degrees of vertical field of view.

However, the real party piece is what sits below the dome. The base provides motion over a range of 13 degrees of freedom. A turntable gives up to 330 degrees of yaw, while the whole chassis can pitch and roll at rates up to 45 degrees per second, up to its maximum of 25 degrees. In addition, the base can provide up to 1g of acceleration in the vertical direction, or heave.

That whole array is mounted onto tracks that allow the dome to move around the room. The rig can move both laterally and longitudinally, at up to an alarming 20 feet per second.

This all gives the occupant of the dome the sensation of moving around as they drive. There are limitations of course, such as the size of the room — a car accelerating flat-out would reach the edges in a couple of seconds — but NADS-1 employs a little trickery. By adding or removing some pitch to change the driver’s sense of acceleration in a given direction, it doesn’t need so much movement across the ground.

NADS-2 is a very similar machine, but it’s fixed and has a smaller field of view. There’s also a portable version, going by the name of NADS miniSim, which looks far more like something you’d find in a sim-racing enthusiast’s games room — albeit with a vehicle body. Mind you, that’s not exactly unprecedented either.

Of course the facility uses the machines for the task of simulating road environments in order to research road safety. NADS-1 might be used to look at a safety system like lane-change assist, or to see how advanced Level 3-5 autonomous systems behave when faced with real-world driving challenges.

That’s all very worthy, but we can’t help but think it’d make for a great place to play your preferred driving sim.