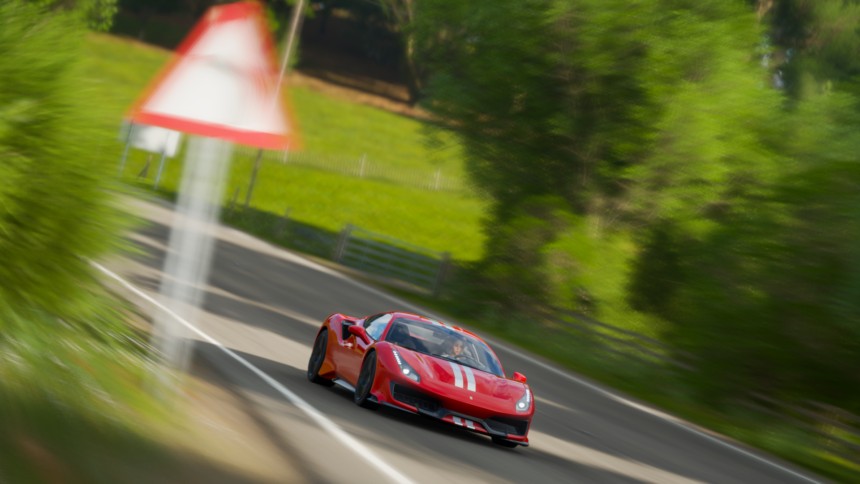 The sun is shining in the UK again, meaning Summer has made its return to Forza Horizon 4. The new seasonal switcheroo kicks off Series 16, bringing a new set of fresh and returning content.

A new Series means a new update to the Festival Playlist, with a trio of cars and an avatar outfit available at 50% and 80% completion. This week, a stripped out V8 Ferrari makes its bow.

Read on to see the latest on this week’s content. 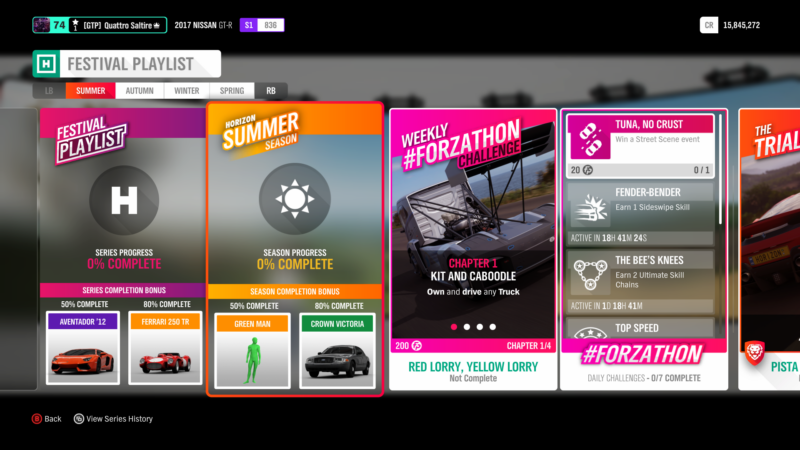 Playlist prizes are headlined by a pair of Italians from different generations. First up is the 2012 Lamborghini Aventador LP700-4.

Built to replace the iconic Murcielago, the Aventador continues Lambo’s tradition of insane, big V12 supercars. Packing a 691hp 6.5-liter V12, the Aventador has more than enough grunt to keep pace with the competition.

Joining it is the Ferrari 250 Testa Rossa. One of the most valuable cars in the world, the 250TR has racing pedigree to back up its timeless looks. A 3-liter V12 with 300hp provides the grunt for the 250TR along with a weight of just over 2,000lb.

Season completion prizes include the Green Man avatar outfit and another opportunity to earn the Ford Crown Victoria. Prizes for seasonal championships this week include the 2004 Honda Civic Type R and KTM X-Bow GT4.

The biggest prize this week is the debut of the Ferrari 488 Pista. Maranello’s most hardcore model yet, the Pista is the ultimate incarnation of the 488. The Pista gets a 200lb weight reduction against a standard 488, along with a significant upgrade in aerodynamics. Ferrari has also worked on the 3.9-liter, twin-turbocharged V8, with power increased to 711hp.

You can acquire the Pista by winning this week’s Trial: “Pista de Resistance”.

A new Monthly Rivals is also in store: race around Princes Street Gardens in the LaFerrari FXX K.

Our full events breakdown is below.

Dancing in the Street Scene 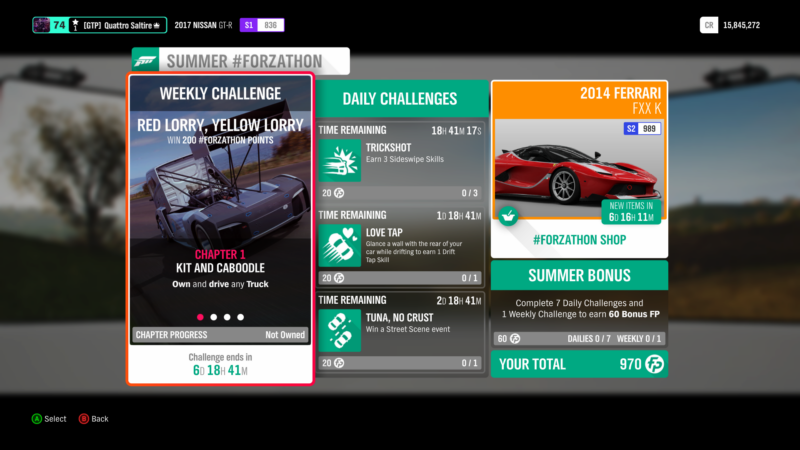 Forzathon goes big this week, and there’s nothing bigger in Horizon than a semi-truck. Own and drive any of the behemoth trucks available to get things started.

Next up, prove you are king of the road and use your truck to earn 10 Trading Paint Skills. Afterwards, continue your path of destruction by earning 10 Wreckage Skills. There won’t be much standing in your way for this objective.

To finish off this week, it’s time to go the distance as you’ll need to win a Road Racing Series event at The Goliath. 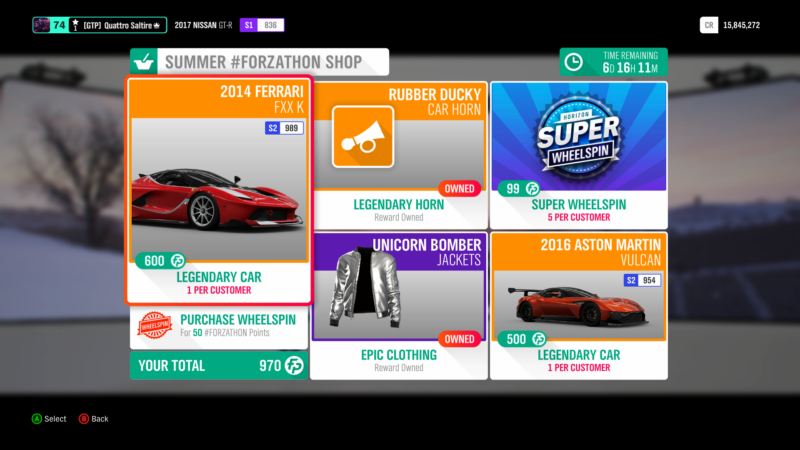 Ultimate track toys headline the shop this week, with some interesting changes to purchases. Now cars are limited to one purchase per customer, with Super Wheelspins limited to 5 per customer.

Leading the way is the FXX-K. A track-hardened version of the LaFerrari, the FXX-K is the most powerful model ever in the Ferrari lineup. The 6.3-liter V12, combined with a Formula 1-spec energy recovery system, produces 1,050hp.

Prepare to pay up 600 Forzathon Points for the FXX-K. If you’re after one for this month’s Rivals event, you can pick one up quickly this week.

Joining the Ferrari is the Aston Martin Vulcan. Aston’s idea of a track toy is much more simple. Unlike the Ferrari, the Aston does without any hybrid assistance, in favor of letting its combustion engine do all the talking. That engine is a 7-liter V12, packing a mighty 820hp.

The Aston is slightly cheaper at just 500 FP, presenting itself as a bargain for those after a track tuned supercar.

Clothing and novelty items this week include the Rubber Ducky horn and the Unicorn Bomber Jacket.

Forza Horizon 4 4 Sep 22 by Andrew Evans
It may come as something of a surprise, but Forza Horizon 4 is nearly two years old. The open-world racer, set in a lightly massaged version of the United Kingdom,…