Team-based esports series V10 R-League will grow by two teams for its second season, which gets underway in April.

This unusual series sees squads of players from esports outfits around the world face off in custom formula-style machinery in a series of challenges using Assetto Corsa. The car is a fantasy model intended to represent what F1 would be using had the sport stuck with V10 engines — giving the car its name. the 900hp, three-liter engine is crammed into a 1,575lb chassis, resulting in a car capable of over 220mph, where the circuit allows.

While the first season saw the eight teams race each other head-to-head across a seven-event calendar, the 2021 season will expand to ten teams, resulting in a change of format. Rather than a single league, the 2021 V10 R-League will have two separate divisions of five teams, followed by playoffs to determine the champion.

The racing will also be slightly different too. For the 2020 season, there were three events in each round. First, the three players in each squad would race in three individual one-on-one races. Following that, there was a three-lap team relay race, which would see drivers race for a lap and then hand over to a team-mate. Finally there was the full team event, which would have all six cars on track racing for points. Each of these three events carried one point for the winning team, for a maximum of three points each round. 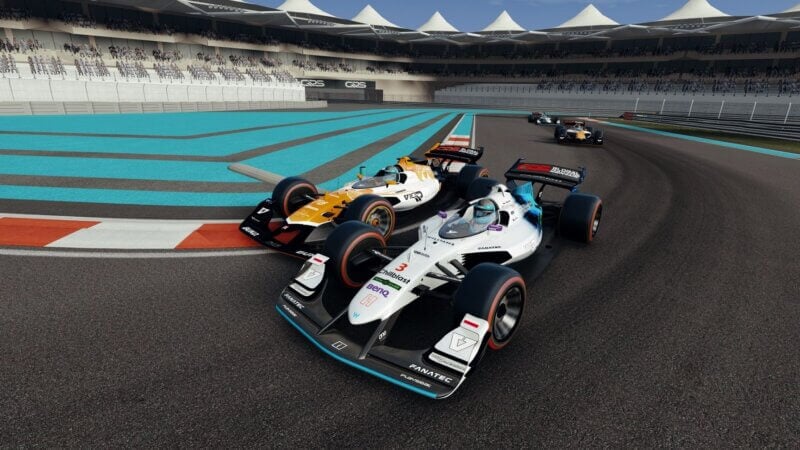 This year the series will drop the one-on-one races, and each event will consist of a home leg and an away leg. Each team selects a home track from the pool of available circuits and hosts their opponents for the relay and team race, then goes away to their opposition’s selected track. That means there’s four points available for each round. The teams can also veto a circuit each week.

All of the teams which contested the 2020 event will be returning, including the champion Porsche24 Redline squad. Like the real racing team, the BWT Racing Point team will convert into the Aston Martin Cognizant team, while squads from BMW, Fordzilla, Red Bull, Suzuki, Williams, and Yas Heat will all race again.

Joining them for the 2021 season will be McLaren Shadow and the R8G esports team founded by F1 and IndyCar driver Romain Grosjean. Each of the two new teams will be placed into one of the two divisions, with the other squads allocated by their 2020 ranking.

In addition, V10 R-League will expand its broadcast options for 2021. ESPN will expand coverage from the USA to Canada, the Caribbean, South America, and Oceania, while BT Sport will continue to show the series in the UK and StarzPlay in the Middle East and North Africa. The racing action all gets underway in April.

Andrew Evans · Mar 16, 2021· Comments
The United Kingdom’s James Baldwin has taken the gold medal in the esports discipline at the FIA Motorsport Games, to give the country its first ever category gold.

Andrew Evans · Mar 16, 2021· Comments
The FIA Motorsport Games will crown its esports champion today, with the semi-finals and final taking place live from the Mistral Hall at Circuit Paul Ricard.

Andrew Evans · Mar 16, 2021· Comments
The world’s best virtual racers will be gunning for the medals in the FIA Motorsport Games Esports event over the next two days, starting with the quarter-finals on Friday October 28.

Andrew Evans · Mar 16, 2021· Comments
After six months of racing, the final six competitors in the 2022 Ferrari Velas Esports Series have gathered in Maranello for the Grand Final, which will broadcast on Sunday October 2.

Andrew Evans · Mar 16, 2021· Comments
The 2022 Ferrari Velas Esports Championship is now down to its final six drivers after two evenings of racing in the Regional Finals.

Andrew Evans · Mar 16, 2021· Comments
Half of the names heading to the 2022 Ferrari Velas Esports Championship Grand Final are now locked in, and today’s North American Regional Final is set to decide the remaining racers.