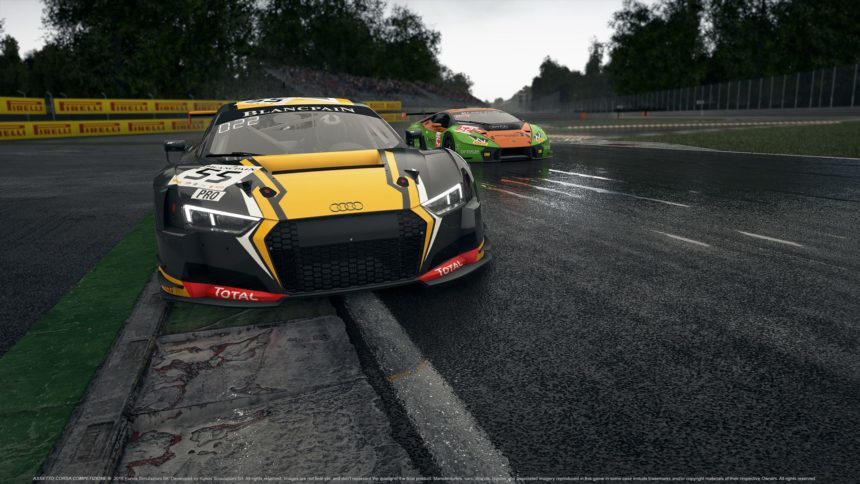 Kunos Simulazioni is hard at work on Assetto Corsa Competizione. It had its first public debut earlier this month, and now the team has released nearly an hour of straight gameplay footage.

Four videos make up the action, all taking place at Misano circuit. It makes sense; the track is new to the franchise, and the team was just there last weekend showing off ACC. Each video showcases a single event Kunos put together for the demo — from dry and wet hot lap scenarios to full races under clear skies and as the sun sets.

While we didn’t cover it in our last look at ACC footage, we can’t ignore the new user interface here. We mean that in a good way; the menus in the original Assetto Corsa, at least on consoles, were… well, not great. These look much more polished, with smooth movements and easy-to-read fonts. It’s certainly more of a match for the best in the genre, and makes the game feel more approachable.

We’ve grouped the two hot lap videos together above to showcase the differences — not only in the comparatively low-revving Ferrari versus the Lamborghini, but also in a fully dry versus slightly damp track. The videos offer a look at multiple camera angles, interior and exterior, giving a clearer idea of the big jump in the graphics department. This is a good looking game.

But to really drive that point home, Kunos has also provided two videos with replay footage on the ends:

Largely, it’s very convincing. There’s some odd light flickering here and there, and low angles tend to make the cars look like they’re floating, especially when there’s reflected light under the tires. But considering this is a pre-alpha build of the game, Kunos could very well fix these issues. A brief overhead shot from 8:21 is a standout of what’s been achieved here.

That same angle appears just after the 10:00 mark in the Merc video. It may be very, very soggy, but Misano looks great here. There’s a real sense of atmosphere, and it has us antsy to try the game ourselves.

Hopefully, that shouldn’t be too long from now. Kunos is still targeting a late-summer Steam Early Access release of Competizione. Stay tuned for more news on the game soon — the next stop on the Blancpain tour is the legendary Spa-Francorchamps at the end of July…

Gameplay Videos
25 Comments Discuss this post in our forums...
Can You Beat the Impossible Gran Turismo Quiz?