As the racing gets underway at Le Mans, 31 Forza Motorsport 7 drivers will be fighting for their share of $75,000 on the other side of the globe. That’s right: the ForzaRC Series 1 Finales are upon us.

This weekend is a culmination of weeks’ worth of play for these drivers. The Rivals qualifiers started back in early April, and these players have consistently kept at the top of their game. Beating out thousands of other players, most of these names should be familiar to Forza regulars: 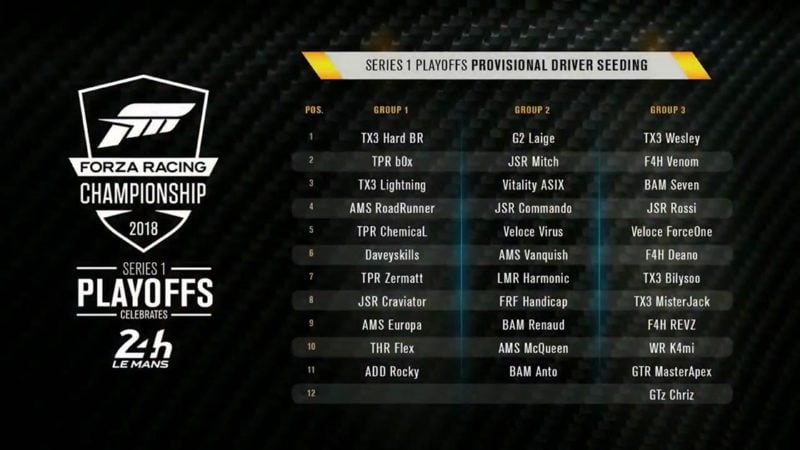 The three groups will face off in a battery of races today, after which only the top twelve will remain. From there, the dozen will duke it out on Sunday, with the following cash prizes up for grabs:

After this, Series 2 will begin, which will see a finale in Mexico City in September. From there, the 2018 World Finals will happen in London, England.

The Car/Track Combos That You Get To Choose

The Series 1 Playoffs will continue the recent ForzaRC approach of letting viewers decide the race setup. Tournament organizer Gfinity has shared the car/track combos that viewers can vote on during the weekend:

In-Game Prizes for Tuning In

As before, the prizes aren’t just for the players on site. Viewers tuning into the live stream at the official site will be able to win a variety of cars and suits for Forza Motorsport 7.

Typically, these involve completing specific tasks. We don’t have those details, but we do know what the prizes are over the weekend:

The racing begins today at 0900 local time (click to convert). Tomorrow, it starts off two hours later. You can watch from the embedded Twitch stream above, but as we mentioned, you’ll want to head over to the official site if you want to collect those in-game prizes.

Good luck to all the racers taking part this weekend!