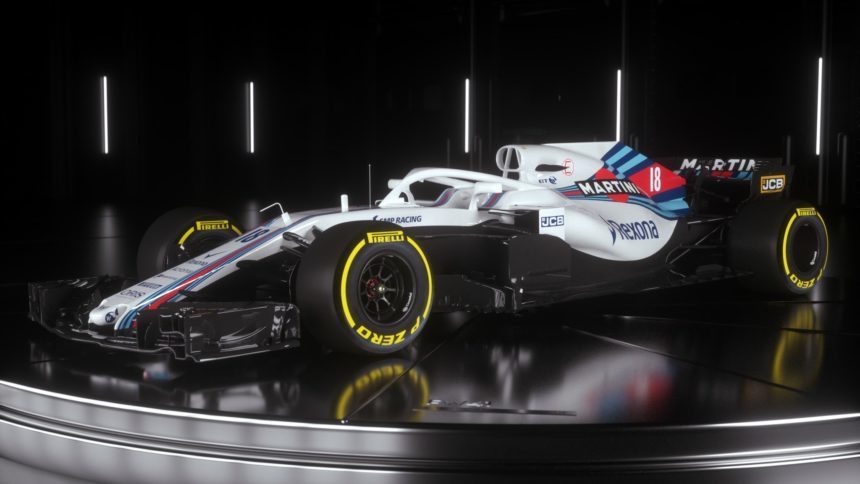 Williams Martini Racing Pulls the Curtain Back on the FW41

Williams Racing is the next in line to reveal its 2018 F1 contender, the FW41. Unveiled in London, this year’s chassis is the team’s 41st entry into the sport.

This year’s Williams is the first designed under technical chief Paddy Lowe’s watch. Lowe, the former technical boss for Mercedes made the jump from Brackley last year.

The Mercedes-powered FW41 adopts a new aerodynamic philosophy, according to Lowe. In fact, like the Haas VF-18, it’s an evolution of the previous car. The halo protection device is the obvious standout here, as it will be on all this year’s cars.

Looking beyond that, the sidepods bear a striking resemblance to last year’s Ferrari — a common theme we expect to see throughout the remaining reveals. The concept proved successful for Ferrari and will no doubt be a focal on the Italian teams car this season.

The sharkfin running along the center of the FW41’s engine cover will also be a familiar sight. With the original now outlawed, the new fin conforms to this year’s tighter regulations. The eagle-eyed will notice a returning T-wing, albeit lower than last year’s.

Lowe further elaborates on the design direction of the FW41:

“The car has many new features, most of which are not all that obvious, but externally the team has pursued a very different aerodynamic concept which has allowed us some significant progress in aerodynamic performance.

“All Formula 1 cars are an evolution of what has gone before to some extent, but the FW41 does involve a number of departures from the directions that have been pursued in the past.

“Overall, the philosophy we are starting to see emerge is a new approach to the collaboration between aerodynamics and design to achieve the optimum working result.”

As revealed earlier this year, the team is in for quite an uphill battle with its driver lineup. Sergey Sirotkin fills in for the retired Felipe Massa, partnering alongside Lance Stroll. While the pairing is the least experienced on the grid, Williams can fall back on the know-how of veteran driver Robert Kubica.

Williams remains hopeful the pairing can raise the team back to its competitive ways. Over the past two seasons, Williams finished the season in fifth. That’s a noticeable fall from finishing third in 2014 and 2015.

While rookie Sirotkin has his work cut out for him, Stroll has proven himself in his short tenure. The Canadian driver brought home a third place finish at the chaotic Azerbaijan Grand Prix.

Going one further, he secured second place on the grid for last year’s Italian Grand Prix. Entering his second season in F1, Stroll will look to assert himself as the team’s number one driver. It will be interesting to see what Williams has in store when the season kicks off next month.