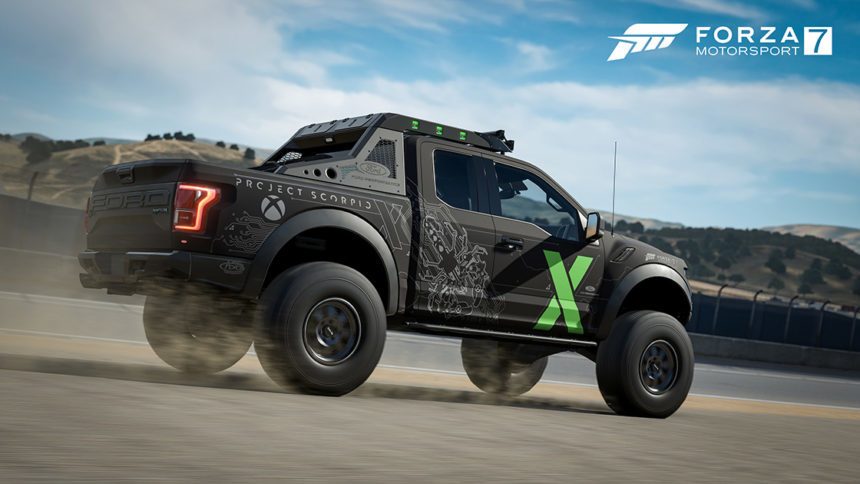 Get those temporary tribal tattoos ready, and put on your freshest Tapout t-shirt. There’s a new rig available to all players in Forza Motorsport 7, and it’s certainly unique.

The 2017 Ford F-150 Raptor Xbox One X Edition, to give it its full name, is a big deal. Literally: it stands over 93 inches tall thanks to those 38-inch BF Goodrich tires. Illustrator Hydro74 provides the Project Scorpio-inspired livery, and the truck gets a variety of green-tinged lighting accessories. Like, a lot of green.

We’ve actually known this custom Raptor was coming for a while. It debuted at the SEMA show in Las Vegas last November, where Microsoft confirmed its future inclusion in FM7. Taking into consideration the atmosphere at SEMA — where overkill is the minimum — the truck starts to make (slightly) more sense.

It still makes us wonder if an off-road expansion is on the cards for FM7. The December car pack rather infamously included three SUVs, while the base game itself includes all of the trophy trucks found in Horizon 3. Speaking of that open-world spin-off, we’re surprised the F-150 isn’t finding its way into both titles simultaneously.

The Raptor XB1 X Edition is now available to all Forza Motorsport 7 players. Simply check your in-game message center to download it. You won’t even need to fist-bump the screen as a thank you.

Forza Motorsport 7 Car List
18 Comments Discuss this post in our forums...
Can You Beat the Impossible Gran Turismo Quiz?