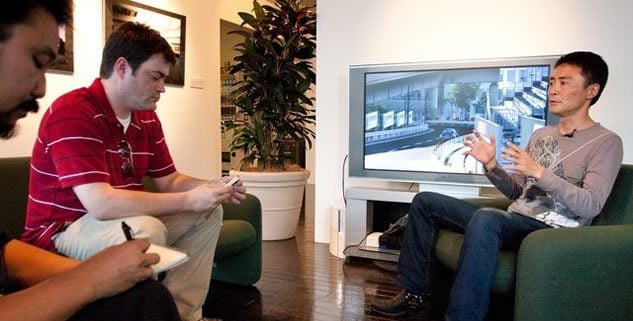 Last weekend’s interviews with Kazunori Yamauchi are finally hitting the web. While most reveal nothing that GTPlanet readers don’t already know, if we add up the bits and pieces of new information, we can get a better idea of what he is trying to tell us (or not). With so many interviews out at once, it’s easy to feel a bit overwhelmed. To help out, I’ve organized Yamauchi’s comments for you, dividing them up by topic. Let’s get started…

Yamauchi: “If it’s just to play the race or just run the game is over. However, if you want to go after the experience I would say we’re at 65%.”  —via JVN

Yamauchi: “The development schedule for the U.S. and Japan are pretty much fixed and the rest are really up to the marketing decisions that need to be made, so our schedule won’t really be changed – it’s really up to [Sony]. –via IGN

Yamauchi: “I don’t think it’s going to be that much later in the U.S. and Europe. This is based on our production schedule. The reason why the dates for the U.S. and [European] regions are not decided yet is because their marketing is still discussing their issues. It shouldn’t be too far off from [the Japanese] date for the other regions as well.” –via GameSpot

Yamauchi: “Once we have the physics calculation engine that will calculate the deformation on impact I think we will be done. […] Racing cars will have the parts falling off, and obviously you will be able to see inside of the car, so it takes a lot of additional effort to create the cars.” –via IGN

Yamauchi: “The big difference between Prologue and GT5 Prologue is that works like an open game. Anyone can go and play together. In GT5, there will be a restricted area where you can invite anyone you want or your friends.” –via JVN

Yamauchi: “We can implement it, but we don’t know whether we will put it in or not. Even for damage, it only took us two months to get it where we’re at, and if we really wanted to, we could enter time changes and stuff like that, but it really depends on how it will affect the quality of the game.” —via IGN

Yamauchi: “Visual modifications, yes. They will also affect the physical characteristics of the car as well.” –via IGN

Yamauchi: “At this point in time, we have nothing really planned.” –via IGN

“Gran Turismo PSP […] will have a connection with GT 5. […] …players won’t be able to move their credits from one version to the next.” —GameSpot

Yamauchi:  “GT5 is a title that was pretty much remade from scratch, but because we did that, the next version is actually going to be faster — the time period it’s going to be released. But I think when GT5 comes out, we’re still going to have things that are left undone, and whether we complete that in GT6, or the next version for PSP, I’m not sure yet. I’ve been working very hard for the last 15 years, and I think that hard work is just going to continue.” —JoyStiq

If you’ve noticed some other detail which you think deserves to be covered here, leave a note in the comments and I’ll update this post.