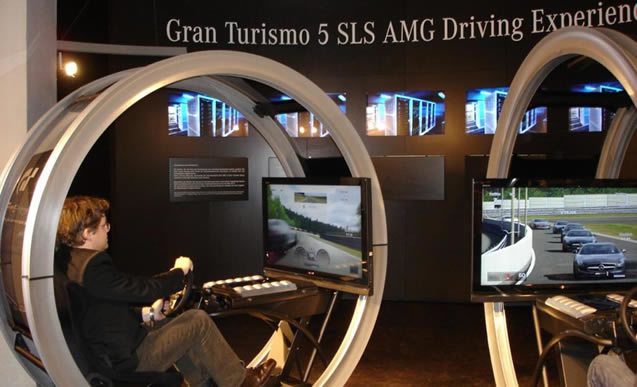 German readers, listen up! Via their “Daimler” blog, Mercedes-Benz has just announced the “Gran Turismo 5 SLS AMG Driving Experience” in the Mercedes Museum at the company’s Stuttgart headquarters. Apparently, the installation  consists of two GT5 Prologue-branded cockpits (the same kind Sony awarded GTPlanet user, Ahmed back in ’08) running yet another new GT5 demo featuring only the SLS AMG and the Nurburgring Nordschleife. What really makes it special, though, is a very generous time limit of what appears to be around 12:00 minutes.

That’s a big deal, because it’s 9 minutes longer than any other demo we’ve seen at the various game shows – more than enough time to get in a complete lap around the Nordschleife while acquiring a true feel for the demo’s physics and game play. The installation will be available from now until March 28, so if you’re anywhere near Stuttgart, grab an HD camera and a tripod and head to the museum!