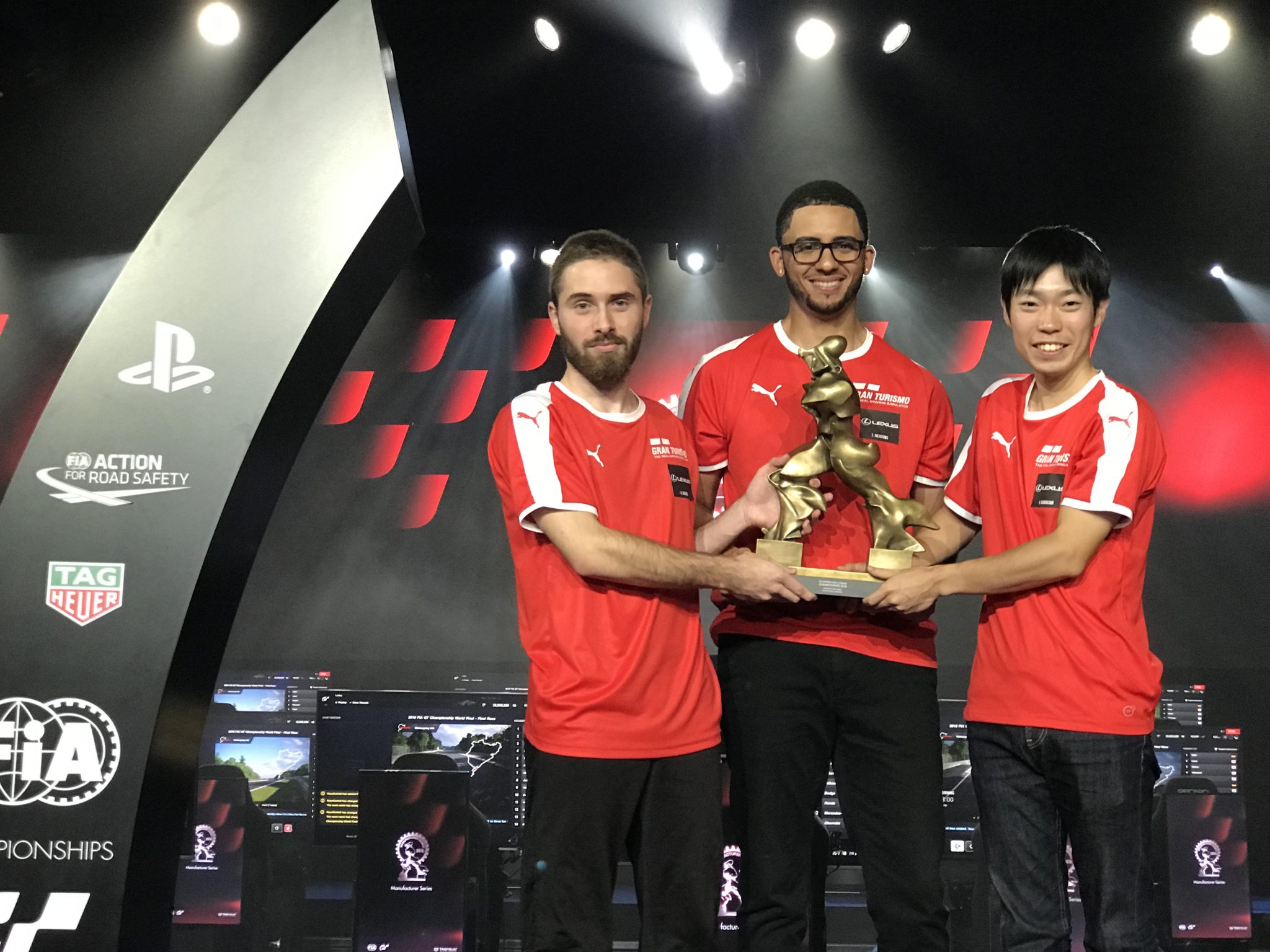 We expected a close race in today’s Manufacturer Series final for the GT Sport FIA Championship in Monaco. But we didn’t foresee the nail-biter that came to pass in one of the wildest live esport events yet.

Saturday’s action got underway with a qualifying session to determine the race grid. This first session would decide the lower starting order, with a surprise for the much fancied Team Nissan ending 7th.

After the initial qualifying period, the six top teams went through to a 20-minute superpole session. This ended with Team BMW backing up their original top time with a remarkable 8:00.067 from Nicolás Rubilar (FT_NicoR).

The BMW team opted to start on medium tires with their Japanese driver, Takuya Okamoto (okasan_joestar7), and the lead lasted through only as far as the Warsteiner Kurve. All four cars behind the BMW had started on soft tires, and the Lexus with Kanata Kawakami (Kawakana222) at the wheel used the grip to his advantage to make the pass. 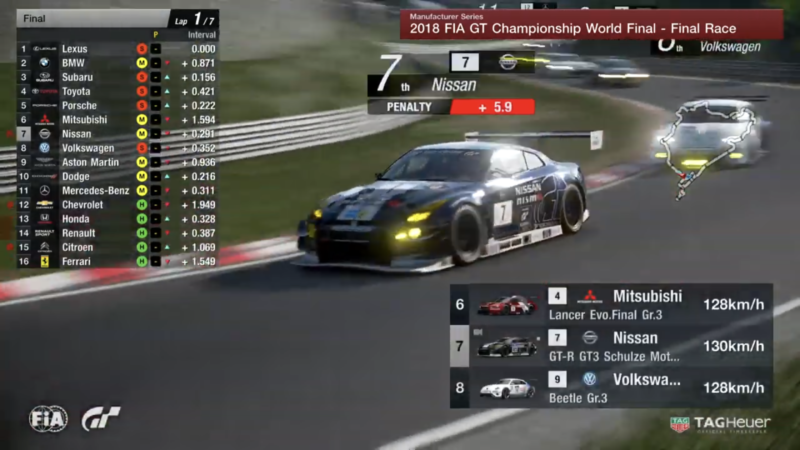 Meanwhile track limits were causing issues across the grid. The hotly tipped Nissan team, with Ryota Kokubun (akagi_1942mi) driving the first stint, drew a six second penalty for what seemed to be a cut at the NGK chicane. Chevrolet and Citroen also picked up penalties.

One of the two major talking points from this race wasn’t far behind though — and inevitably at the hazardous Aremberg corner. Takuma Miyazono (Kerokkuma_ej20) in the Subaru seemed not to take account of the grip difference to the BMW M6 ahead and tagged him under braking. This put the BMW into the gravel and right down to last place. The stewards gifted Miyazono a five second penalty, but this essentially put the German brand out of the running. 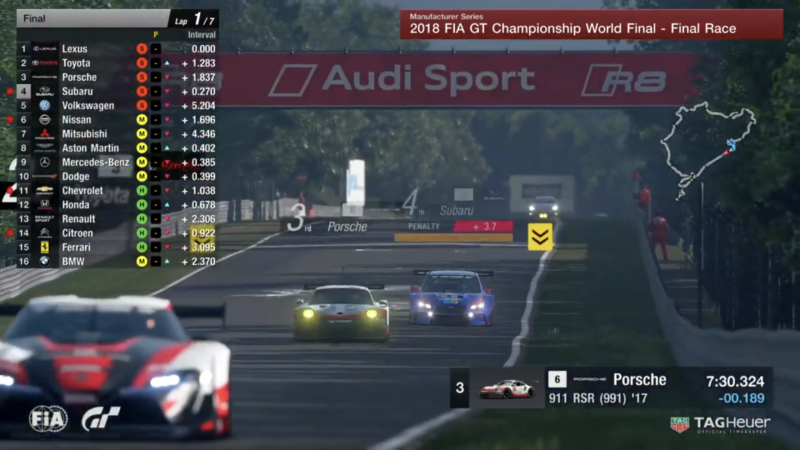 With Subaru’s penalty served on Dottinger Hohe, Toyota was able to slip up to second and into what would become a race-defining, and race-long, battle for the lead between sister brands. Frenchman Rayan Derrouiche (RC Miura) put the FT-1 past its sibling at the end of the second lap. This also saw the first round of pit stops, with all but the lead six cars stopping for tires and a driver swap. Unusually, this put Dodge on a completely different strategy, opting for a three-lap stint on the medium tires rather than the softs.

This put European champion Mikail Hizal (TRL_LIGHTNING) into the Nissan, but in his efforts to make up the lost ground he too had an uncharacteristic incident. Dropping the GT-R’s rear tires onto the dirt through Schwedenkreuz, he span clean through the Aremberg corner, just missing Thomas Compton-McPherson (cubertom) in the Aston Martin. 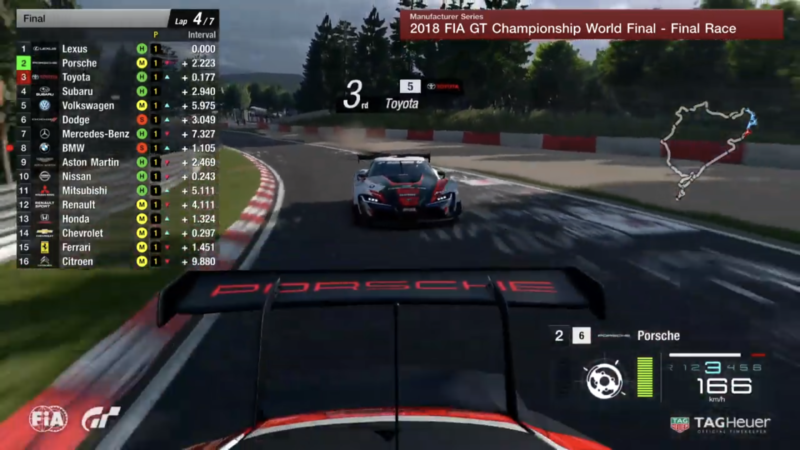 Lexus and Toyota were still trading places at the front though. A mistake for Agustin Cajal (ORMA_Aspicito) at Breidscheid though allowed the Lexus to clear the FT-1, and Thiago Gonzaga (FT_Solid) followed up into second in the Porsche at Pflanzgarten. Half a lap later the Porsche, on medium tires sprang past the Lexus for the lead.

This brought the majority of cars in for their second and final stop. With eight cars now on the soft tires and with their theoretical fastest driver in the car, it would be a scrap to make up the lost time to the lead quartet when they pitted for harder tires at the end of lap five. 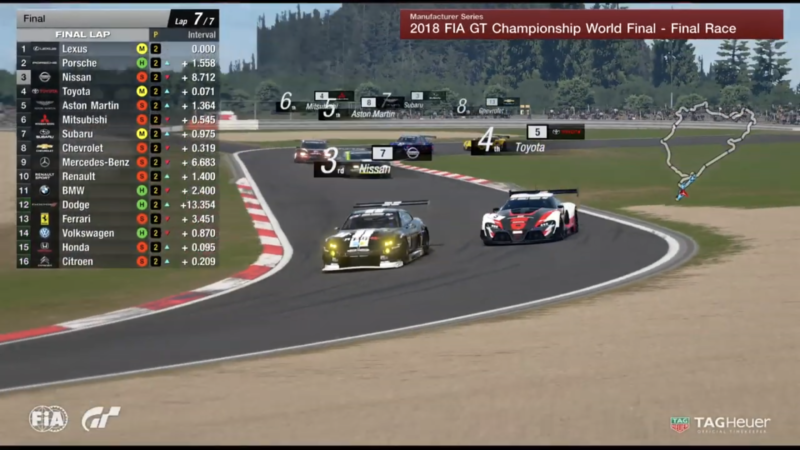 Predictably, Fraga in the Nissan was a man on a mission. Over the course of the sixth lap he dragged the GT-R up first past the Aston Martin of Yoshiharu Imai (legacy0193) and then the Subaru driven by JT Lauro (BLKJ_Evolution). On the long straight of Dottinger Hohe, Tyrell Meadows (GTAcademy2013) slipped the Lexus back up into the lead past Sérgio Fonseca’s (serfonseca) Porsche, while Fraga claimed another scalp — Tomoaki Yamanaka (yamado_racing38) in the Toyota. With ten seconds between the second and third and a huge tire advantage, Fraga was, from nowhere, in with a shot.

However, Yamanaka wasn’t willing to let it go, and, despite the medium tires, harried the Brazilian through the entire GP circuit and then some. The duo were closing, but not fast enough — and they were dragging the Aston Martin and Mitsubishi along with them. By the time they entered the Dottinger Hohe straight for the final time, the gap from the Porsche in second to the Mitsubishi in sixth wasn’t even two seconds. 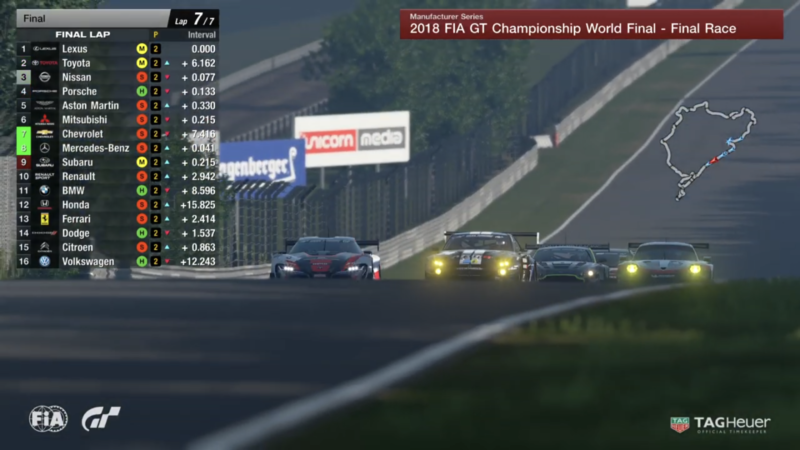 But then disaster struck — for Nissan. As Fraga, Fonseca and Yamanaka went three-wide under the bridge, the GT-R sipped its last drop of fuel. With no engine power, the Toyota drew clear, the Aston passed for third, the Mitsubishi joined it in fourth and the Porsche repassed for fifth. 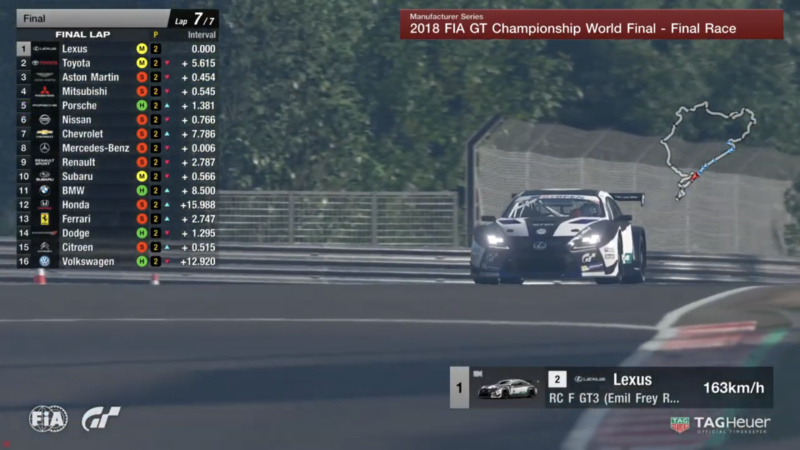 After nearly 109 miles of racing, Meadows took the checkered flag in the Lexus by just over five seconds, with sister brand Toyota in second. Aston Martin — the 16th qualifier of the 16 brands here at the finals — rounded out the podium.

We’ll be back again tomorrow with the final Nations Cup series of races, once again live from Monaco. Stay tuned for more on that, as well as driver interviews from the Manufacturer Series.

2,544 Comments
Click here to see the related discussion our forums...