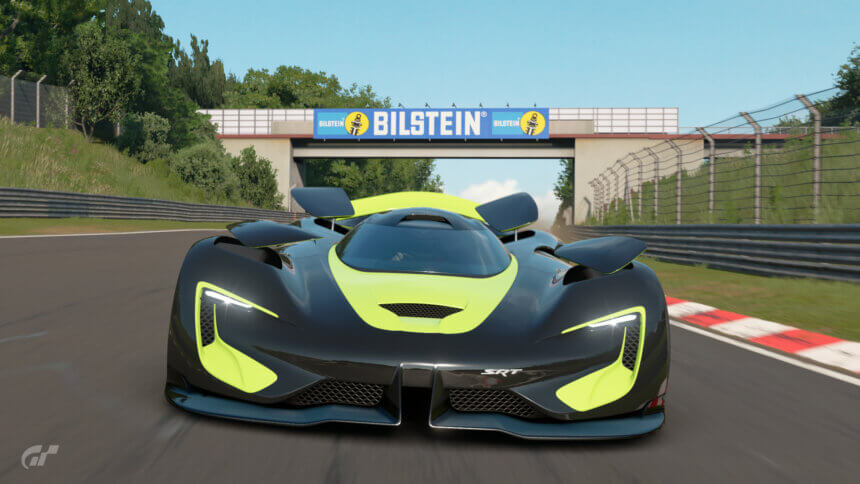 There’s another set of new GT Sport Time Trials upon us for the next two weeks, and we’re going to suggest taking the brave pills for one of the events.

Those wanting to take things easy can head to the tuning event this time round. You’ll be lapping a relatively short track, though not one without its challenges, in the shape of the Brands Hatch Indy Circuit.

To take on this event you’ll need to chose a vehicle from the very wide selection in the Gr.4 category. This is a group of vehicles that, for the most part, are ordinary road cars stripped of unnecessary parts, equipped with some more durable components and sent out to the track. There’s a variety on offer, from front-wheel drive hatchbacks to… well, the Bugatti Veyron.

Ordinarily it’s those front-drive cars that are the quickest in any given situation, unless there’s tire wear. With BOP turned on you might also expect that to be the case here, as they have more power and less weight than their rivals. However, the ability to tweak vehicle settings may see other options come to the fore this fortnight.

The fixed setting race could barely be less different. Firstly, you’re tasked with setting lap times on the Nurburgring Nordschleife, which demands very long periods of very intense concentration, simply so you know which way it goes next. That’s challenge enough, but you’ll also be behind the wheel of the insane Dodge SRT Tomahawk X Vision GT.

This beast is one of the most extreme vehicles ever created for the Vision GT project. Boasting a seven-liter V10 engine capable of delivering over 2,100hp to the rear wheels, and pneumatic-powered front wheels, the Tomahawk X is one of the fastest cars in the series in a straight line. It’s also festooned with all manner of active wings to increase cornering speeds and decrease braking distances.

That’s likely to result in pretty much a rollercoaster ride around the Green Hell. You’ll definitely want a button mapped for KERS as well, to increase top speed down the long Dottinger Hohe straight.

GT Sport‘s Time Trial mode is a global competition, ranking your best time against all players worldwide, rather than just those in your region as with other Sport Mode events. These two time trials will run through to February 11, when two further events will replace them. 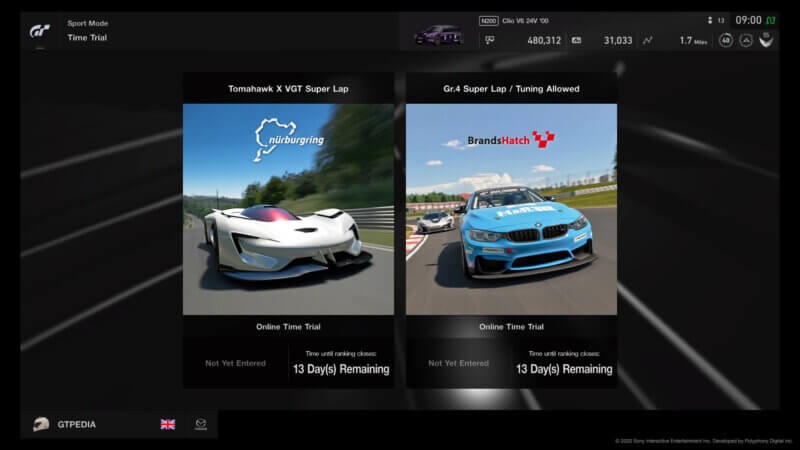 GT Sport Time Trial
294 Comments Discuss this post in our forums...
Test Your Badge Knowledge With Our Car Logo Quiz

Gran Turismo Sport 294 Feb 25 by Andrew Evans
GT Sport players have a new set of Time Trials for the next two weeks and, after the slightly unusual and seemingly unplanned change last time out, things are back…

Gran Turismo 7 267 Feb 23 by Andrew Evans
Gran Turismo fans will have to wait a little longer to get their hands on the next full entry in the series, as Sony has revealed the game won’t make…

Gran Turismo Sport 1377 Feb 22 by Andrew Evans
A new set of GT Sport Daily Races has arrived, and the next seven days will put you in racing action at circuits — real and fictional — around Europe.…

Gran Turismo Sport 2276 Feb 18 by Andrew Evans
Updated February 20: Since we posted the details below, all corresponding information has been removed from the official Gran Turismo website. We’ll update this article with more information as we…

Gran Turismo Sport 1377 Feb 15 by Andrew Evans
The latest set of GT Sport Daily Races, running for the next seven days, will see you recreating the golden era of rally in a rather unusual event — as…

Gran Turismo Sport 2276 Feb 12 by Andrew Evans
Polyphony Digital has released more information on the scheduling for the 2021 season of the Gran Turismo FIA Online Championship. Although we don’t have a full race calendar yet —…