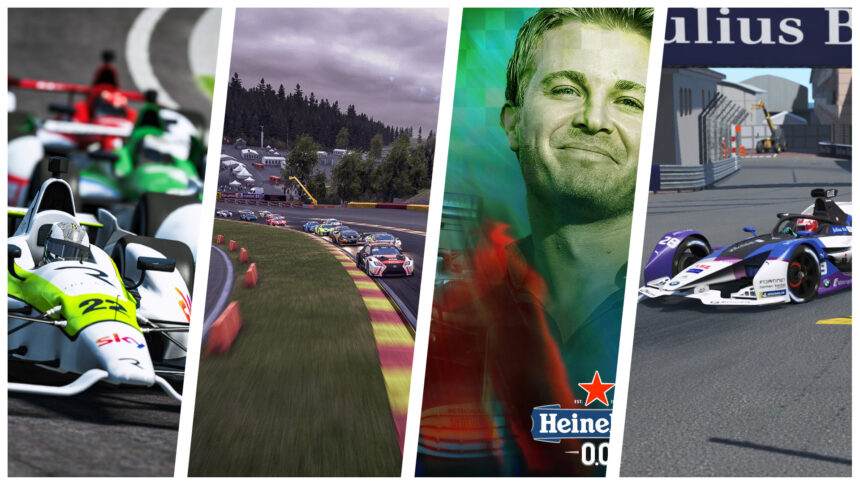 Keep Up With All This Weekend’s Live Esports Action

There’s more great esports racing to come this weekend, as the real world continues to take a back seat to the virtual. While IndyCar and NASCAR are no longer with us — NASCAR resuming its meat-space action this weekend — there’s plenty of action across multiple disciplines.

Among other things this week, electric racers duke it out in Hong Kong, two former F1 stars return to see if they’ve still got it, and Fernando Alonso — esports team owner — makes his own virtual debut. Here’s how to keep up with all this, and more!

Formula E’s electric racers go back to the Hong Kong venue this week, with Maximilian Guenther still leading the way. The BMW team driver has won two of the three rounds, in addition to the pre-season test, and will hope to extend that lead with another win this week. Pascal Wehrlein is the only man to break the run up with a lights-to-flag win at Monaco last week.

The series so far has hinged on some quite spectacular crashes, with some cars even leaving the circuit altogether. There’s also an unusual “race royale” format, in which the last car on the road gets eliminated at the end of each lap, before a final shoot-out.

Two weeks ago, we saw four-time world champion Sebastian Vettel make his esports debut. This week it’s the turn of the man he replaced at Scuderia Ferrari: two-time champion Fernando Alonso. Alonso joins the championship at its half-way point, as the Legends visit the Dutch track of Zandvoort.

Last week’s racing saw Emanuele Pirro take the championship lead as Jenson Button had to endure a race two flip, having won the first race at Estoril. The Brit will be hoping to fight back though, with next week’s racing taking the Legends to unfamiliar surroundings: Indianapolis.

In addition, the All-Stars and Pro Cup return for another week of racing. The action starts at 1600 UTC on Saturday, and you can watch it all below:

It’s back-to-back weekends for the SRO series, with a twist. The top pros and sim drivers will head to the Nurburgring for the third round on Sunday, but this weekend the amateur drivers — sim racers from online qualifiers — will take the Union Flag for their first race at Silverstone. That gives us a full weekend of flat-out GT racing to look forward to.

The Am Series gets underway first, at 1900 UTC on Saturday. That’ll be followed by the Pro and Silver Series at the regular time of 1145 UTC on Sunday. Despite the wins thus far going to Bentley (Jordan Pepper) and Audi (Lorenzo Marcucci), it’s an Aston Martin leading the way in the Pro event, courtesy of Luigi di Lorenzo’s two points finishes. Patrick Selva (McLaren) and Andrea Capoccia (Audi) lead the way among the Silver drivers.

You can catch the Am Series live below on Saturday. We’ll update the link with the Nurburgring event for Sunday.

F1 is staging an unusual challenge this week featuring former F1 drivers Nico Rosberg and David Coulthard. Coulthard is no stranger to the challenge of virtual racing, although the last time we saw him in esports he was behind the wheel of a real car, taking on sim-racers.

There’ll be a series of events with Rosberg and Coulthard racing short sprints, before a 25% race distance grand prix at a fan-vote circuit. This will be the full, 20-car grid with the ex-F1 stars taking the front row ahead of a pack of influencers.

The broadcast starts at 1700 UTC on Sunday May 17. In the meantime you can enjoy highlights from the virtual Spanish Grand Prix from last week below:

Live Stream
2 Comments Discuss this post in our forums...
Test Your Badge Knowledge With Our Car Logo Quiz

Gaming 28 Apr 8 by Andrew Evans
If you’re one of the tens of millions of gamers who have been trying — and failing — to get hold of a new-generation console over the last six months,…