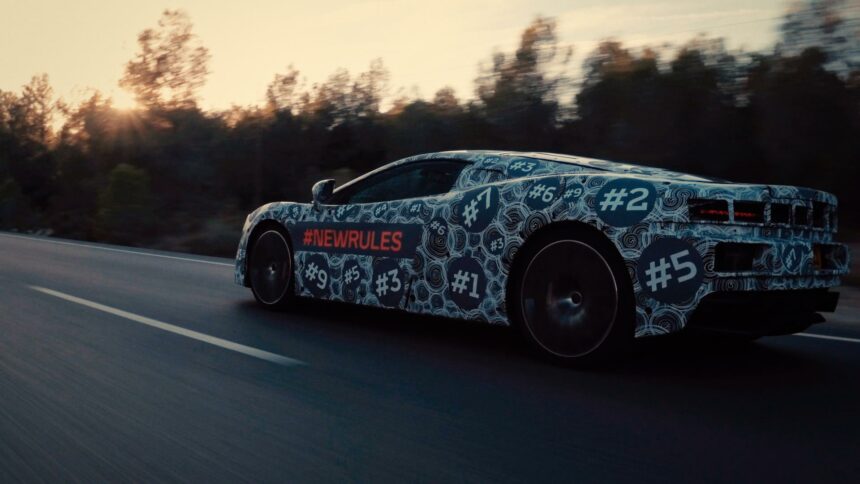 McLaren is looking to rewrite the rules of the grand tourer according to CEO Mike Flewitt.

This comes from a teaser released during McLaren’s press conference at the Geneva Motor Show. In it, we see a camouflaged car sporting #NEWRULES on the door with a bunch of numbers.

While Flewitt did not offer up a ton of information about the car itself, he did have this to say.

“The fourth McLaren to be introduced under the Track25 business plan will be our interpretation of the Grand Tourer. It will be a car that combines competition levels of performance with continent-crossing capability, wrapped in a beautiful lightweight body. It’s a car that has been designed for distance and one that will also provide the comfort and space expected of a Grand Tourer. But with a level of agility never experienced before in this segment. In addition, it will be the lightest of Grand Tourers and by also having the best power-to-weight ratio, I promise it will be one of the quickest. In addition, it will be the only Grand Tourer to share its DNA with the 250mph McLaren Speedtail.”

For those unfamiliar with the Track25 business plan, it’s McLaren’s vision for the future. In it, McLaren says it wants to release 18 new models by 2025. It will also invest upwards of $2.1 billion to make it happen.

In addition to the new models, the company also aims to increase its production. Currently, it’s kicking out around 4,800 supercars per year. Under Track25, McLaren will look to bump that number up to 6,000 units or more.

This new grand tourer should help McLaren achieve that goal too. This is especially true since the company is adamant it will not create a sales-boosting SUV.

Flewitt did mention during the press conference that this new GT will slot outside the brand’s current Sport, Super, or Ultimate Series. This suggests it will create a fourth series that could open a whole new segment for McLaren to explore.

We will find out more about the new GT in the coming months. Our best guess for a full reveal is in July, at the 2019 Goodwood Festival of Speed.

In the meantime you can check out the teaser video below: