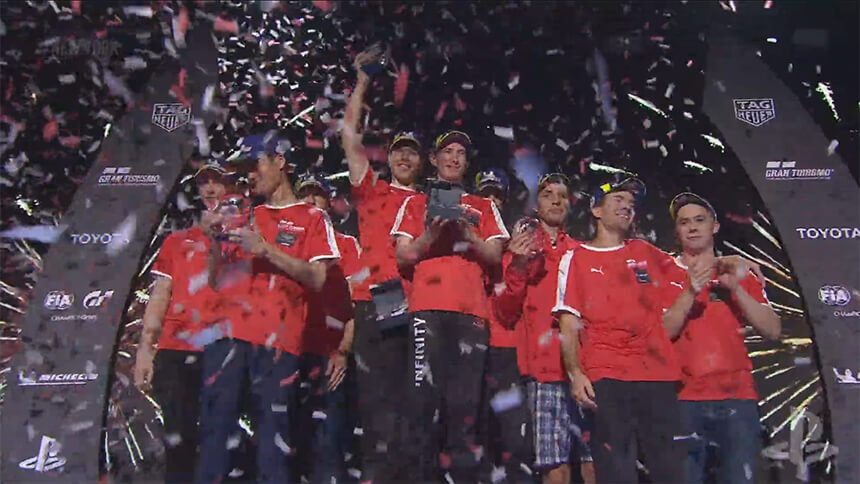 Over four races, spread over 2.5 hours in the PlayStation Theater on Broadway, the trio representing the brand came away with two victories and a second place to win by a comfortable margin from the champions of Paris, Aston Martin.

The action started with a superpole shootout among the top six qualified teams to determine the final grid line-up. Somewhat against expectations, Mikail Hizal managed to put the Gr.3 Subaru WRX ahead of the field at Interlagos to gain the first advantage. He lead Coque Lopez’s Toyota GR Racing Concept and the Mercedes-AMG GT of Cody Latkovski. 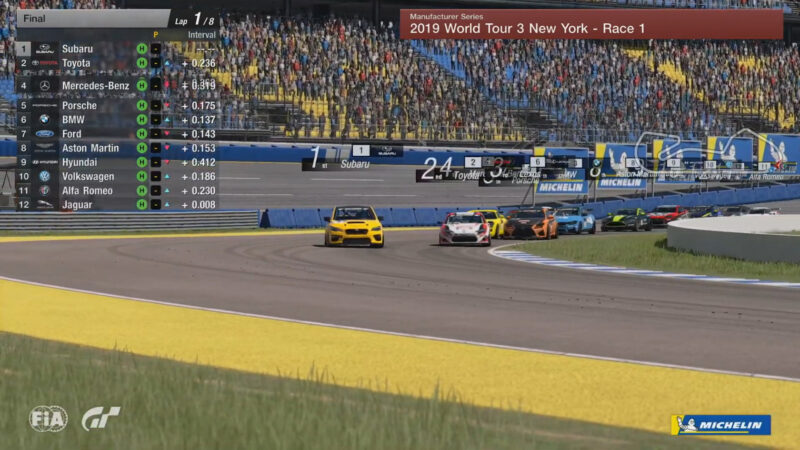 How much of advantage pole position would be in the first race is something we could all speculate about. The infield circuit at Blue Moon Bay is dominated by a good chunk of the oval’s main straight, and that means lots of slipstreaming.

Nevertheless, Joseph De Jesus managed to keep hold of the lead from Facundo Dudulec in the Toyota 86 Gr.4, at least to start with. The lead cars tried a variety of lines through the first turn, with Anthony Felix in the Mercedes heading out to the far outside of the track, but the move didn’t work and the SLS fell back into the chasing pack.

It transpired that Dudulec was merely biding his time, and in the tight turns under the bridge on lap 2 made his move. That seemed to surprise De Jesus, who was instantly mugged by a gaggle of other cars as Porsche (Simmons), BMW (Rubilar), Mercedes, and Lexus (Holland) all streamed past.

The front four soon pulled away, with Toyota leading Porsche and, a couple of seconds behind, BMW leading Mercedes. Further down the pack, De Jesus was losing places as quickly as Nishimura in the Volkswagen Scirocco was gaining them. However it was Hyundai that was having the hardest time. Connor Healy picked up a penalty on lap three for colliding with Nick McMillen’s Aston Martin — which ended up pushing Armen Aghakhan’s Ford Mustang — and never recovered.

At the flag, Dudulec took the Toyota to the win, with Simmons not able to capitalize on the slipstream in the Cayman GT4, and Rubilar’s BMW M4 holding off Felix’s Mercedes for third. 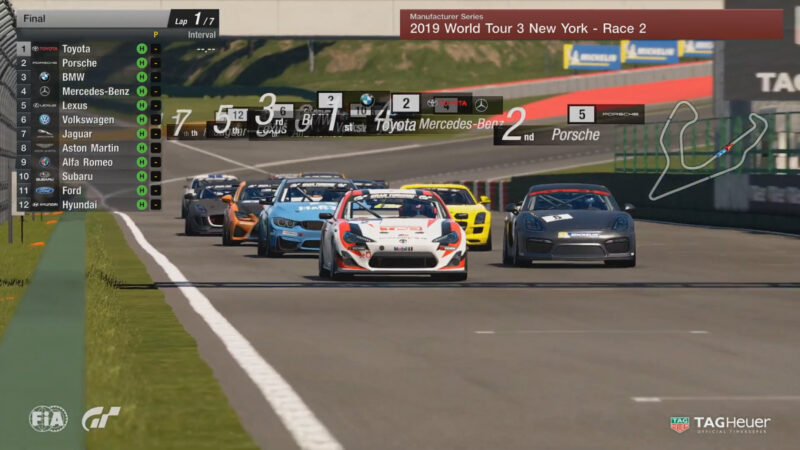 From the power track at Blue Moon Bay, the action moved to Lago Maggiore’s West Circuit, but still in the Gr.4 cars. The finishing positions from race one determined the grid for this race, so Simon Bishop started the 86 Gr.4 on pole.

The West Circuit cuts out a chunk of the GP track’s second sector, so the run from turn two to the banked bowl corner is flat out. Inevitably that created the conditions for position changes right away, as Mark Pinnell in the Cayman tried to make the banking work for him. Bishop stayed high to avoid, but as he turned in contacted Soma Iseri’s BMW M4, who’d taken the racing line between the two. That put the Toyota wide, with Bishop further collecting the Porsche recovering from a little trip to the dirt, getting all but stopped in his tracks.

That shook up the order somewhat, with Iseri hitting the front from Bernal Valverde’s Mercedes and the Lexus of Baptiste Beauvois in third. Takuma Miyazono has also recovered the Subaru up to 4th, and this was only on lap one!

The two German brands ended up in a race long scrap, swapping places practically on every lap. However the action down at the bowl on lap three proved decisive. With the cars in front engaged in a three-wide battle, Masahiro Kochibe in the Aston Martin managed to sneak through into third. Countryman Miyazono was having less luck, as he picked up a one-second penalty for contact with the Porsche Cayman.

With the Mercedes and BMW still squabbling, they dropped into Kochibe’s clutches. He took the Aston into the lead on lap four — again down at the bowl corner — and never looked back. Valverde did finally manage to make a move stick to bring the Mercedes home just behind, with Iseri’s BMW keeping hold of third. 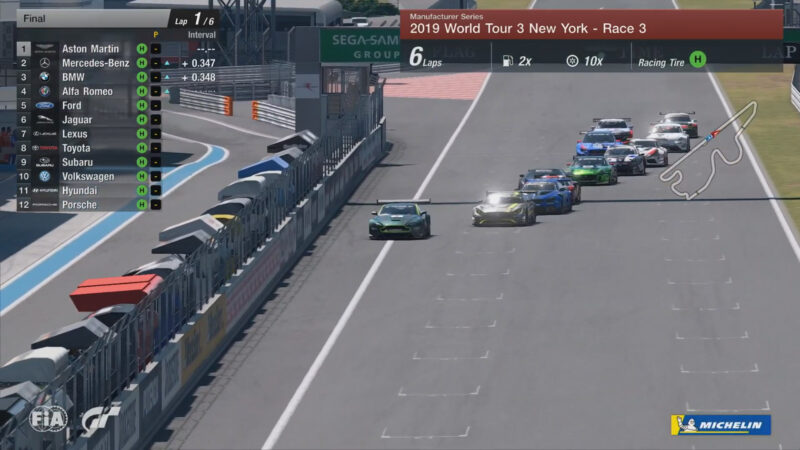 It was time to step the pace up a bit with the more powerful Gr.3 cars, and the long straight of Fuji provided a place to stretch the cars’ legs. Following Kochibe’s performance in the second race, Adam Suswillo had the V12 Aston Martin Vantage on pole, but with Cody Latkovski — second in both Nations and Manufacturers at the Nurburgring – starting just behind.

This proved to be the defining conditions for the race, as the two played a six lap game of cat and mouse. But for a heavy contact, it was inevitable that they’d finish at the front, and they established a commanding lead.

In the early part of the race, the action as further back. Right at the back, in fact — although the stream didn’t reveal exactly what happened, Adriano Carrazza’s Porsche 911 RSR simply plowed through the pack at turn one, moving from 12th to 9th via everyone else’s doors and back bumpers. Curiously, the stewards opted to hand out a warning to Coque Lopez in the Toyota following this incident.

The pack behind the front duo seemed relatively stable until lap four. Leaving the first turn, Randall Haywood seemed to a have a solo off (picking up a track limits penalty, just to add insult to injury) in his BMW M6, and this freed up Andrew Brooks in the Lexus RC F to chase after the lead duo.

Up front Latkovski was getting visibly frustrated with Suswillo. The Mercedes was evidently quicker on the bends, but the Vantage had the advantage on Fuji’s faster sections. Suswillo was picking strategic, but fair, lines to keep the Mercedes behind. However the 10x tire wear factor soon put paid to the Brit’s plans. As he started to lose traction in the slow corners, Latkovski was able to pick him off around the outside to take the lead on the final lap.

However it went from bad to worse for the Aston, as a simple error under braking allowed Brooks — who’d caught up as Suswillo had backed Latkovski up — to nip past in the Dunlop Corner and steal second. 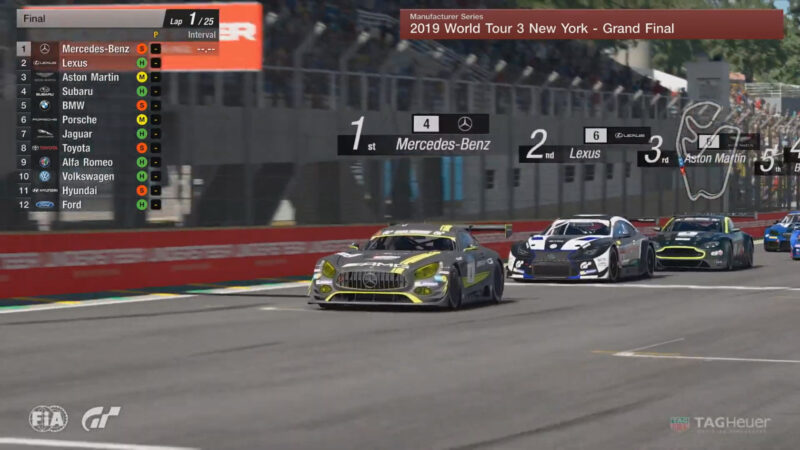 That all lead to the final, slightly complex showdown. Here the teams must use all three drivers and all three tire compounds over a 25-lap race of Brazil’s famous F1 circuit. The tactical angles are significant, balancing off the options of giving your fastest driver the seat time or the best tire, or boosting your weakest team member with good rubber. Do you rabbit early and hope to keep the lead, or try to keep up and finish fastest? It’s a race you can never quite work out until after the second pit stop.

Case in point was the front three cars. Mercedes, on pole, started with Valverde on soft tires. Dan Holland took the first stint in the Lexus on hard tires. Just behind them was Aston Martin, starting with GT Academy winner Nick McMillen on the mediums — three different strategies for the lead three cars.

Aston Martin looked to have made the right call at the start, with McMillen wasting almost no time getting past the Lexus. However the cars all seemed to soon settle into tire order, as the faster soft cars made their way past. Rubilar’s soft-shod BMW M6 was next past the Lexus — albeit picking up a warning on the way — and Dudulec followed on the next lap in the Toyota. McMillen was able to hold out until the fourth lap before Rubilar made his move up into second.

Subaru was the first team to blink on stops, pitting on lap four to get rid of the poor hard tires that had seen them tumble down the order to 8th. The next lap Alfa Romeo and Lexus followed suit, with Volkswagen, Jaguar and Ford all making the call on lap seven.

These races often settle down in the middle, and so it proved here. With cars running different strategies from different areas of the grid, they were largely operating in small clumps, although a nice tussle between Toyota, Lexus, Hyundai, Subaru and Alfa Romeo developed on lap 11 as their plans began to overlap.

Soon though it was time for the final push to the flag to unfold. Hyundai — out of sequence with the others — briefly took the lead as the cars around it began to pit, with BMW and Mercedes opting for a final stint on medium tires while Alfa Romeo, Subaru, Lexus and Aston Martin all went for the fastest soft tires. Superpole man Hizal had it all to do, coming out from his stop in dead last.

He soon began to cut through the order, but tripped up over Coque Lopez’s Toyota. After what seemed to be a shove from Shogo Yoshida’s Alfa Romeo, Hizal took two bites at the GR Supra’s rear end, and picked up a warning for his troubles. However after another half lap he’d made it through and up to 7th.

At the front, Mercedes and Aston Martin left the pits separated by 2.2s, but with a tire advantage to the Aston. The drivers? Of course it was Latkovski and Suswillo, who’d had such an entertaining tussle just 25 minutes prior in race three. As the Hyundai dived for the pits on lap 19, it was a straight battle to the finish between the two.

For Latkovski and Mercedes, either of the top two positions would be enough for the title thanks to the double points on offer. Suswillo needed the win and hope one of the other cars could catch and pass the AMG. However Latkovski drove like he needed the win, visiting Suswillo’s racecraft from Fuji back on his British rival. The Mercedes became the widest car in Brazil and, despite pulling alongside on a couple of occasions, Suswillo couldn’t make the pass.

Further back, Hizal had managed to survive a midfield scrap and dragged the Subaru up into third, some eight seconds back. Thanks to some poorer results earlier in the day, this wasn’t enough to take the brand to the overall podium, with that final place taken by Lexus on countback.

Don’t forget to tune in to GTPlanet tomorrow, for the Nations Cup final!

Andrew Evans · Aug 24, 2019· Comments
The United Kingdom’s James Baldwin has taken the gold medal in the esports discipline at the FIA Motorsport Games, to give the country its first ever category gold.

Andrew Evans · Aug 24, 2019· Comments
The FIA Motorsport Games will crown its esports champion today, with the semi-finals and final taking place live from the Mistral Hall at Circuit Paul Ricard.

Andrew Evans · Aug 24, 2019· Comments
The world’s best virtual racers will be gunning for the medals in the FIA Motorsport Games Esports event over the next two days, starting with the quarter-finals on Friday October 28.

Andrew Evans · Aug 24, 2019· Comments
After six months of racing, the final six competitors in the 2022 Ferrari Velas Esports Series have gathered in Maranello for the Grand Final, which will broadcast on Sunday October 2.

Andrew Evans · Aug 24, 2019· Comments
The 2022 Ferrari Velas Esports Championship is now down to its final six drivers after two evenings of racing in the Regional Finals.

Andrew Evans · Aug 24, 2019· Comments
Half of the names heading to the 2022 Ferrari Velas Esports Championship Grand Final are now locked in, and today’s North American Regional Final is set to decide the remaining racers.