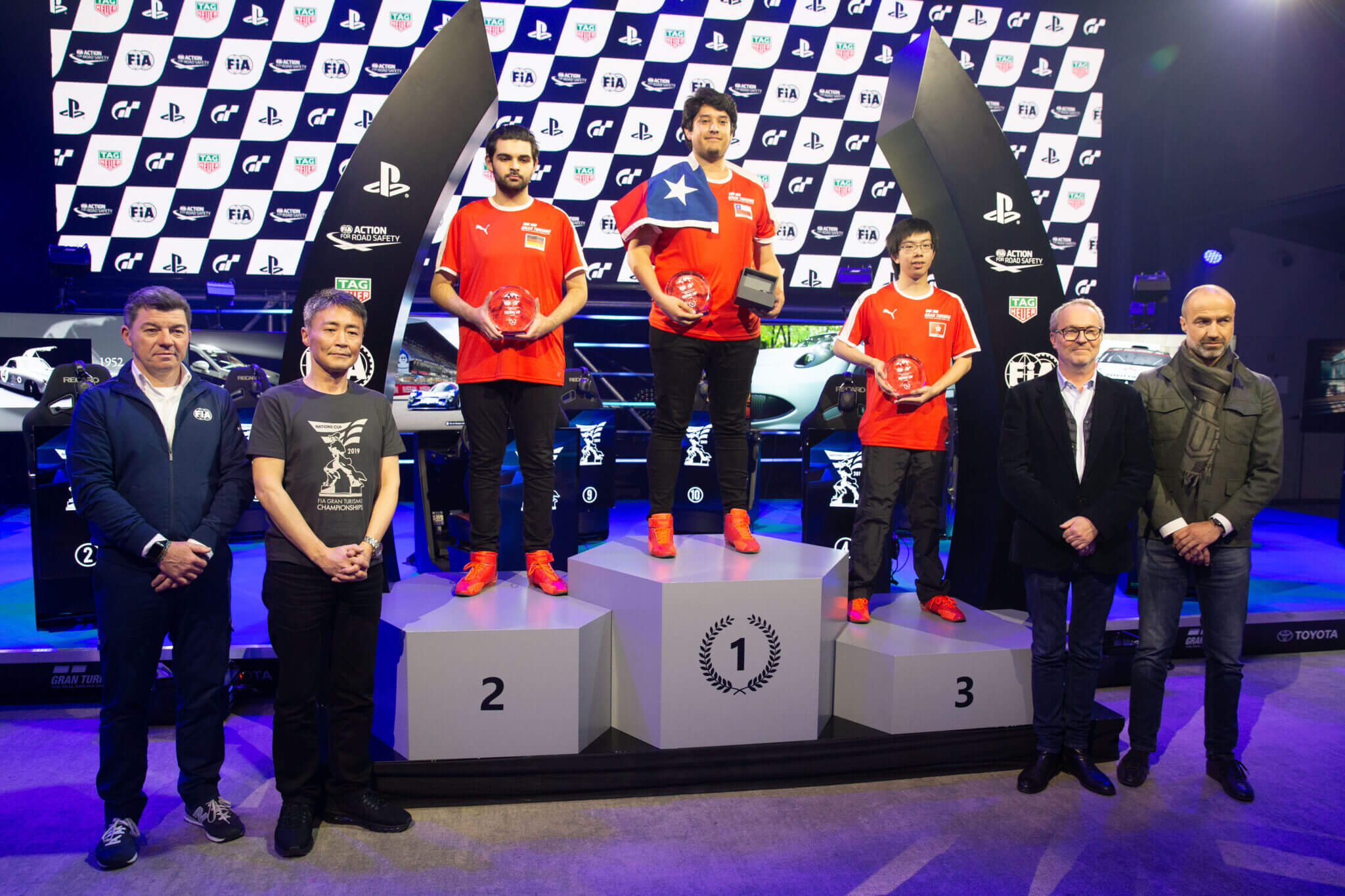 Chile’s Nicolas Rubilar has won the Nations Cup final at the Paris World Tour event — and qualified for the World Final in the process. 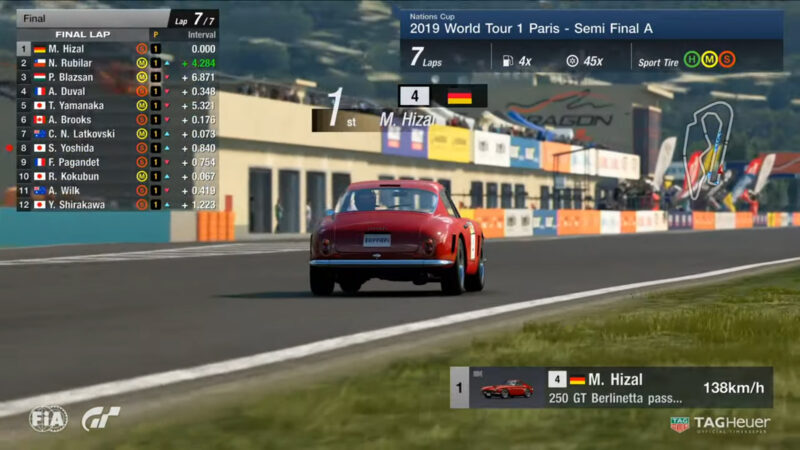 The 24 drivers had selected their cars for the semi-final and repechage races by random draw. This saw pole-sitting Rubilar starting in the new Lamborghini Countach 50th Anniversary, while Hizal, starting in fourth, was in the new Ferrari 250GT Berlinetta.

Unlike the three cars ahead of him, Hizal had chosen to start the 1961 Ferrari on medium tires. This seemed unwise as Ryota Kokubun, in the Nissan 350Z, outbraked the German into the final double-apex corner, only for the Ferrari to power back past on the straights.

Hizal kept that momentum going and despite the tire disadvantage, breezed past both Patrik Blazsan in the GR Supra and Yamanaka in the Audi TT to take second.

The race itself hinged on the pit stops. Hizal stopped after his third lap to strap on a set of soft tires, while the soft runners came in at the end of their fourth lap. That gave Hizal the lead thanks to an out-lap on fresh softs, and he never looked back. 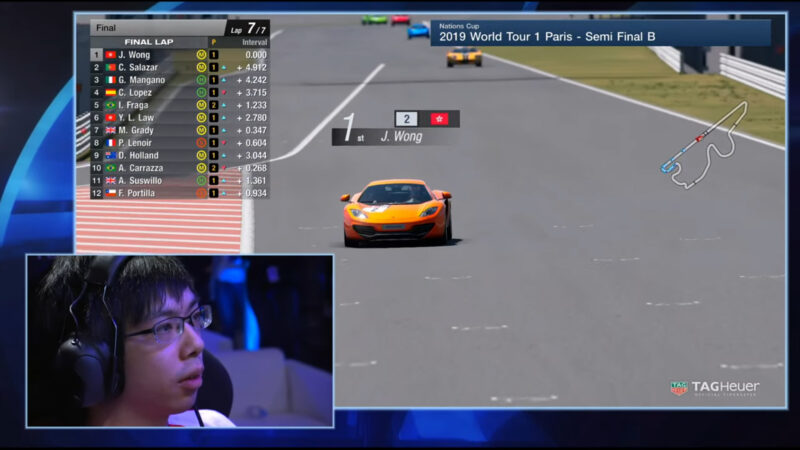 This was a race that became defined by two driver errors. The first came almost immediately, as Fabian Portilla ended up taking to the grass on the inside of turn one. Without firm ground to slow him down, the Audi R8 rocketed through the turn like a missile and took out Adam Suswillo in the Aston Martin DB11.

Meanwhile Fraga, Jonathan Wong and Coque Lopez were able to scamper clear on soft tires, as Fraga built up a healthy advantage at the head of the field. But an uncharacteristic error put the brakes on his charge.

Heading into the pits on lap three, the Brazilian was too eager with his button presses and accidentally selected a second set of soft tires. As drivers are required to use two different tire grades in the race, this meant he’d have to return to the pits again, losing significant time to his rivals. Strangely his countryman, Adriano Carrazza, made the same error.

This then dropped Fraga into the middle of an enthralling seven-way battle over fourth place, but the world champion made his class show. Although he wasn’t able to make automatic qualification, he dragged the Huracan up to fifth to head through to the repechage.

In the end, the race proved a comfortable victory for Hong Kong’s Wong in the McLaren MP4, followed home by Carlos Salazar — who’d started 11th — in the Ford GT, Giorgio Mangano, and Lopez. 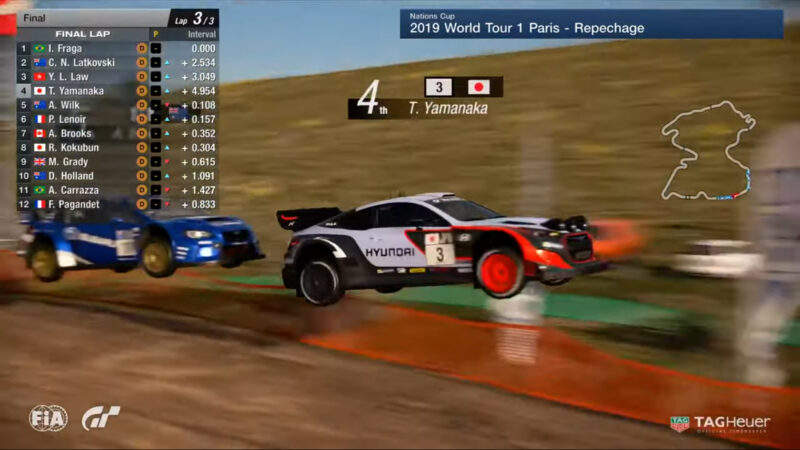 For the first time ever in any FIA event, the action moved off-road. The six fastest non-qualifying drivers from each semi-final headed out to Fishermans Ranch and Group B race cars.

The drivers had a three-lap sprint of this complicated dirt course, and it proved quite the spectacle. Fraga showed his skills don’t stop at the track, by taking the lead from Latkovski halfway round the first lap — and never relinquishing it.

However the story of the race came from a mad scramble for the fourth and final position. At some point all of the cars from fourth down to 11th occupied the spot, with it changing hands corner by corner — and sometimes several times in one.

The key corner was the tightest one on the track. True to its name, the catch fencing was catching drivers out, most notably when Kokubun ended up facing the wrong way on the final lap. With Fraga, Latkovski and Law secure on the podium, this incident proved decisive. Another local, Pierre Lenoir, came through unscathed to seal his place in the final, just at the expense of Adam Wilk and Andrew Brooks. 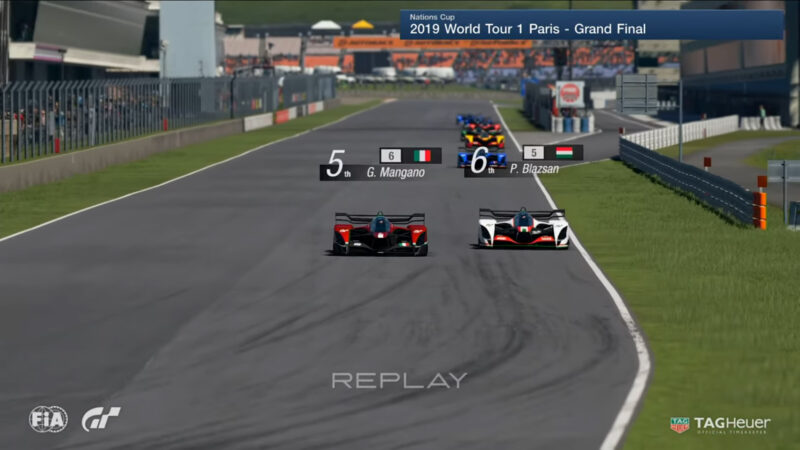 There’d just be one race to decide the final, using the X2014 Competition cars we’d seen in the World Final, at the new Autopolis circuit.

The drivers had 16 laps to take the trophy, during which they had to use all three racing tire compounds for the X2014.

For a moment it seemed like the World Final would repeat itself. Fraga, starting in 9th, quickly made his way past two drivers on harder tires to get up to 7th. Wong, meanwhile, made an error that saw Rubilar — who’d earlier set the fastest lap with this combo — slide past into second.

That saw the first pit window come, with the top three choosing to mirror each other’s strategy: soft to medium. In fact the lead five pitted as a bunch, a lap after most of the rest of the field.

One mistake is enough to lose a race, and so it proved for Hizal. He chose to stop a lap earlier than Rubilar behind him, but clipped the barrier on Autopolis’s tricky pit entry. That was enough to turn a 1.1s advantage into a 0.9s deficit after Rubilar’s own stop a lap later.

As the laps ticked away, Rubilar only stretched the advantage. Both Wong and Blazsan — the only driver in the top half to finish on softs — closed up significantly, but Hizal was able to hold position in case the Chilean made an error of his own. 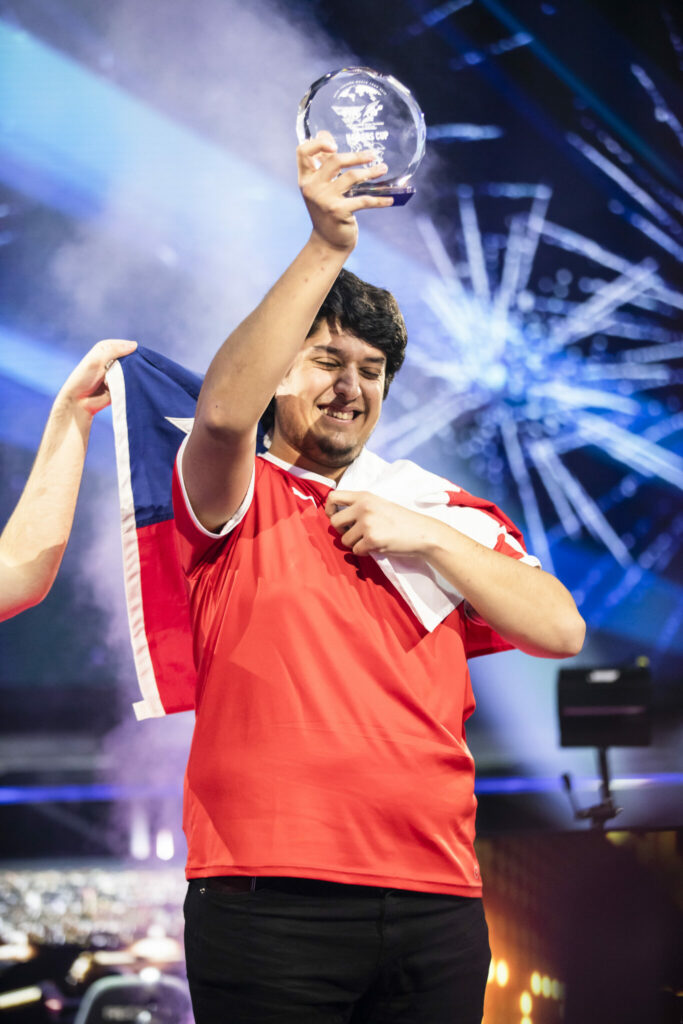 Yet it never came. An overjoyed Rubilar held on to take the checkered flag, winning the event and qualifying for November’s World Final. Hizal, although second, seemed inconsolable on the podium.

We had a chance to speak with the top three finishers after the final race. Here’s what they had to say:

The big winner at @thegranturismo #FIAGTC Paris World Tour event was Chile's @FT_NicoR, who scored first place in the Nations Cup competition and secured a spot at the World Finals in November. Congratulations, Nicolas! pic.twitter.com/8RWn81HKm1

It was a tough 2nd-place in the Paris World Tour Nations Cup for Germany's @thegranturismo star @HizalMikail, who just missed the chance to secure a spot in @thegranturismo #FIAGTC World Finals. He will have more chances this year, though (and the next World Tour is in Germany!) pic.twitter.com/rvklzyacUh

Jonathan Wong was thrilled with his 3rd-place finish in @thegranturismo #FIAGTC Paris World Tour Nations Cup. We had a chat with him about his race, and how consistency — not just outright speed — helped him get onto the podium. pic.twitter.com/bfHazQ9nA9

The live event action moves on to the Nurburgring in June, where there’ll be another chance to qualify direct to the 2019 World Final.