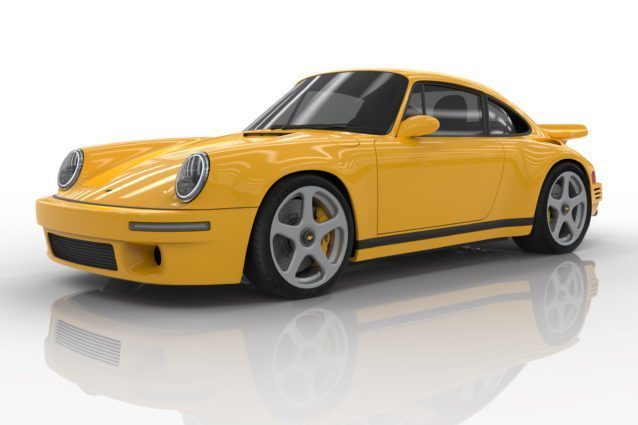 The Geneva Motor Show is typically a treat for auto enthusiasts, but this year has truly been something else. Between the launches of a new Ferrari grand tourer, McLaren supercar and even an Alpine sports coupe, we’ve been treated to a Bentley roadster, a four-door take on Mercedes’ AMG GT, and Pininfarina’s long-awaited Vision GT candidate.

As if it couldn’t get even better, RUF has joined the party with a modern interpretation of the very car that put it on the map — the CTR Yellow Bird.

Although it bears the outward appearance of its 30-year-old predecessor, RUF is proud to point out the new CTR features the company’s first-ever chassis built entirely from scratch. That monocoque frame, like the body, has been crafted out of carbon fiber — which keeps the new Yellow Bird at a featherweight 2,640 lbs. Combined with an all-new 3.6-liter, twin-turbocharged flat six pumping out 710 hp and 649 lb-ft of torque, the RUF can torch 60 mph in just 3.5 seconds, on its way to a 225 mph top speed.

An impressive figure, very nearly matched by the original’s 213-mph run at Italy’s Nardo Ring three decades earlier. Indeed, this new CTR carries an important legacy, as well as a milestone for the longtime Porsche specialist.

“We have been waiting for the right point in our history to build our own car,” said RUF president and owner Alois Ruf in a statement, “and the 30th anniversary of the CTR Yellow Bird is that moment.” 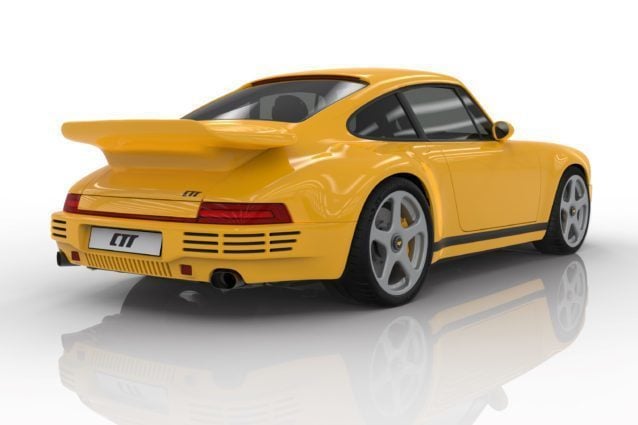 The exterior could be classified either as a tasteful, restrained update — in the vein of, say, the Singer Porsche — or a mess of contradictions, depending on who you ask. The massive 19-inch rims, fiber-optic taillights, and modern, projection-style headlights with LED running strips belie the CTR’s unchanged, iconic 930-generation proportions. Under the skin, however, the new Bird keeps the retro theme intact precisely where it should, thanks to a six-speed manual gearbox driving the rear wheels, and only the rear wheels.

That aesthetic is carried into the interior, where the driver is immersed in a sea of gray-toned alcantara befitting of an ’80s racecar, with yellow and green plaid in the seat cushions to pepper in some on-brand color.

Among gamers, RUF has been historically — and unfairly — dismissed as a stand-in for Porsche. With the storied German automaker finally free of its exclusive licensing deal with Electronic Arts and making its way around to just about every franchise it has missed over the past decade-and-a-half, let’s hope that new CTR is one RUF developers and publishers still make an effort to include.

Or at least it better be, because with only 30 units slated for production beginning in 2018, there’s little chance anyone will get to experience the Yellow Bird in its second flight.

Andrew Evans · Mar 8, 2017· Comments
Gran Turismo series partner Toyota has revealed a special, limited edition version of its Toyota Yaris hatchback, which not only bears the Gran Turismo 7 name but comes with a free copy of the game and a PlayStation 5 console.

Andrew Evans · Mar 8, 2017· Comments
After it surprisingly revealed a new car at the Consumer Electronics Show (CES) in 2020, Sony has taken the covers off a second model at this year’s show — and it looks like it might be planning to build them.

Andrew Evans · Mar 8, 2017· Comments
Porsche has officially taken the covers off its Vision Gran Turismo car, designed specifically for Gran Turismo 7 when it launches on March 4.

Andrew Evans · Mar 8, 2017· Comments
MG’s specialist design center, SAIC Design in London, has created a new concept car that’s not only inspired by gaming, but a games room itself.

Michael Leary · Mar 8, 2017· 13 Comments
Although Lamborghini has now officially pulled the wraps off its latest nostalgia project, the Countach LPI 800-4, you’re already too late to buy one.

Andrew Evans · Mar 8, 2017· 21 Comments
Genesis has unveiled a trio of new racing car concepts designed in collaboration with Gran Turismo, destined to take their places in the racing game series in the near future.

Andrew Evans · Mar 8, 2017· Comments
Nissan has taken the covers off the latest model of its flagship performance car, the GT-R Nismo, ahead of its market launch later this year.