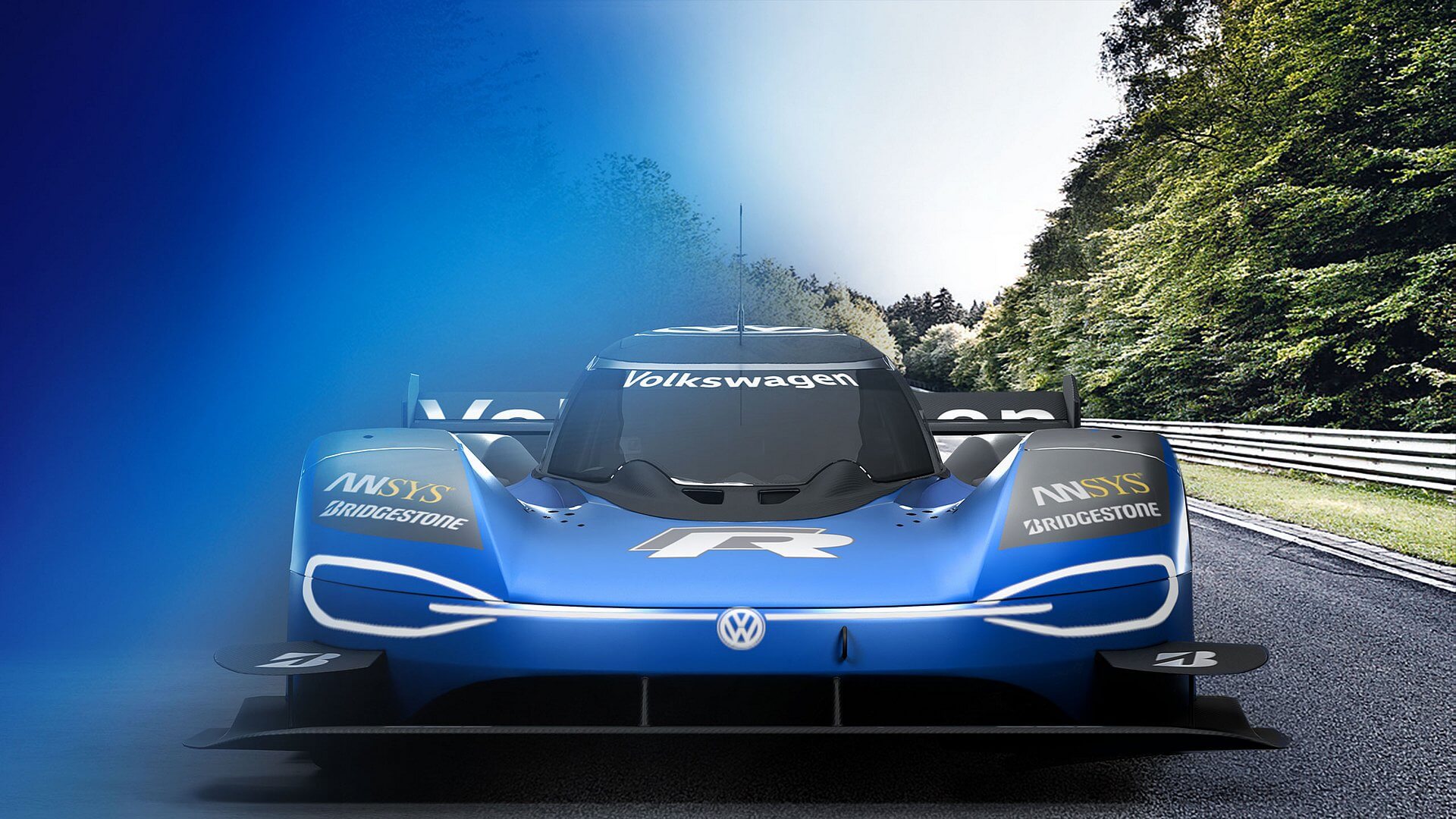 After some much-needed rest and recuperation over the last week or two, I’ve come back to a whole heap of new sim racing content. Over the last few days, rFactor 2, DiRT Rally 2.0 and RaceRoom have received new goodies. It always puts a spring in my step when there are new toys to play with when I get home. Of all the newly-released toys, I’ll be talking about the bonkers Volkswagen I.D. R.

This fully-electric, four-wheel drive monster previously demonstrated its potential when it smashed the Pikes Peak record by 16 seconds last year. But that isn’t enough for Volkswagen. As I’m writing this, VW is at the Nordschleife, fully intending to smash the electric lap record. Given the aim, I had to give it a go myself!

Visually, the car is incredibly striking. Smooth, sleek and with a rear wing in the style of the old Group C longtails. Add in a massive splitter and side skirts and the I.D. R wouldn’t look out of place racing at Le Mans. It is a beautiful, purposeful, rapid looking machine.

Now, there are a couple of important differences with the car in RaceRoom. While Sector3 and VW have worked together to bring it to the sim world, it lacks the DRS of the real car. Due to that omission, it is limited to around 155mph in the sim, rather than the 167mph VW is aiming for in real life. As I understand it, the speed limit is down to making sure it has enough battery to complete a lap at full speed.

As someone that hasn’t driven many fully electric cars in sims, there is one thing that is still bizarre to me: the sound. I’m still used to fast cars sounding like the end of the world is taking place under the hood. Being able to judge the speed of the car by how strained the engine sounds simply isn’t a thing here.

With the I.D. R being all electric, the torque is extraordinary. With around 480lbft of torque, I’m not upset this thing has 4WD and traction control! All that traction and torque gives the most incredible launches out of the turns. The only time you’re going to be out of control with this machine is if you carry too much speed into a corner, or hit one of the many massive curbs the Nordschleife teases you with.

The relatively low top speed and lack of sound make it a whole new experience in trying to deduce just how fast you’re going. Everything feels so slow at the top end, yet the car has an incredible amount of downforce.

In the blink of an eye, you go from feeling like a snail to ridiculous corner speeds. With the second half of the Nordschleife being so fast and flowing, I was on the edge of my seat for nearly all of it. Then I got to the Döttinger Höhe, where it almost feels walking pace. Talk about speed blindness.

I love downforce cars that accelerate like a banshee, and this is no exception. However, despite all that performance, I couldn’t go under six minutes. On the plus side, I did beat the current electric record. Could it go under six minutes with DRS and an extra dash of top-end speed? I’m sure we’ll find out soon enough…

If you want to give this car a try, it is currently available for free in RaceRoom.

Andrew Evans · Apr 26, 2019
If you fancy getting your hands on the brand-new Thrustmaster T248 steering wheel, then Sector3 Studios has a giveaway that should be right up your street.

Andrew Evans · Apr 26, 2019· Comments
By now, we should all be used to seeing pro drivers trying their hand at esports events. Over the past couple of weeks, and in response to the near total cancellation of real-world motorsport, pros have raced against personalities in the sim-racing world in a series of exhibition races.

Andrew Evans · Apr 26, 2019· Comments
PC racing sim RaceRoom Racing Experience is truly putting the “free” into “free-to-play”. Sector3 Studios has opted to make not only the game itself but every single item of content within it free to all for the next few days.

Michael Leary · Apr 26, 2019
The first update of 2020 has arrived to RaceRoom Racing Experience, and with it comes a brand new circuit. Located in the city of Shaoxing in the eastern province of Zhejiang, China, say hello to the Zhejiang Circuit.

Michael Leary · Apr 26, 2019· Comments
The December update for RaceRoom Racing Experience is now available on PC. With it comes plenty of goodies that are appropriate for this time of the year.

Michael Leary · Apr 26, 2019· Comments
We’re coming up on the end of the year, and right on cue, Sector3 Studios has begun teasing what’s next for RaceRoom Racing Experience. The Swedish studio has revealed the next car on its way is the BMW M4 GT4.