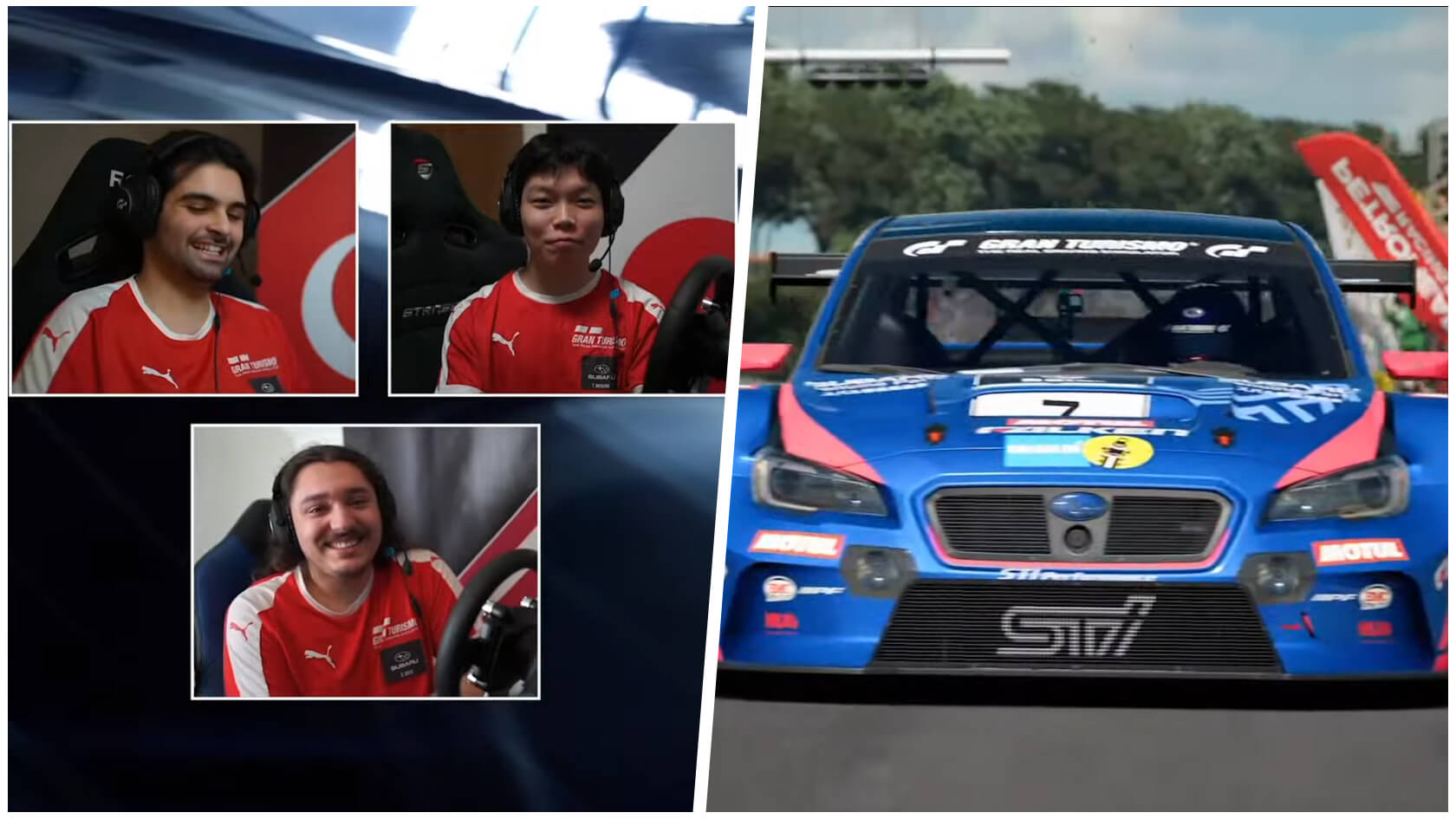 Subaru has another world title to add to its trophy cabinet, with victory in the 2020 FIA-Certified Gran Turismo Online Championship Manufacturer Series.

The three-man team of Mikail Hizal, Takuma Miyazono, and Daniel Solis took the title courtesy of two wins from the three races, including in the final, double-points race of the event, after a hard-fought evening of racing. 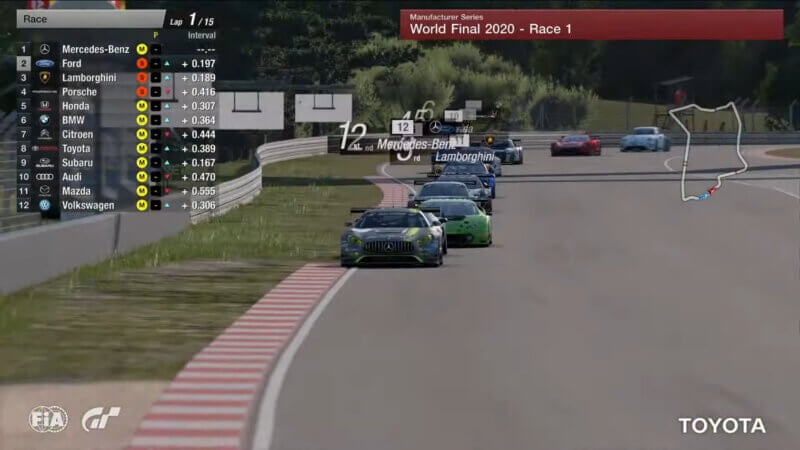 Early on it looked like Mercedes-Benz would be the team to win, improving on its second place in 2019. Lucas Bonelli was the form driver in race one at Sardegna Road Track A, setting pole position and then the early pace despite a tire-grade disadvantage.

Eventually the Ford of Tatsuhiko Kato was able to make its soft tires count and get past Bonelli, with Dan Holland in the Lamborghini — in the brand’s first FIA final — following shortly after. Porsche, the only other car to start on the softs, saw its race come to an end when Matt Simmons, tussling with the BMW of Coque Lopez, ran too wide entering the first chicane and met the wall.

With the tire advantage swapping after pit stops, Kato was putting in a stellar drive to hold Valerio Gallo’s NSX behind, helped by the GT’s prodigious straight line speed. But nobody could catch Bonelli at the front. 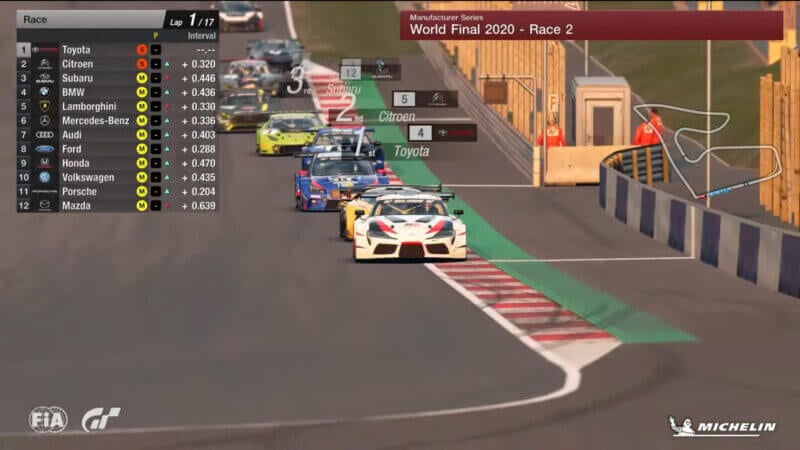 The second race saw an unusual grid at Red Bull Ring, although Toyota lead the way courtesy of Adriano Carrazza. Citroen and Subaru lined up right behind, but it was only Toyota and Citroen starting on the softer tire.

Again, this lead to a pretty early advantage for Toyota and Citroen, but Miyazono in the Subaru was able to stay in relatively close contact, while dropping Cody Latkovski’s Mercedes as he scrapped with Randall Haywood in the BMW.

That proved vital when the tires swapped mid-race. Alonso Regalado in the Citroen GT couldn’t provide much resistance to the charging Miyazono, leading to a battle that would occupy much of the end of the race. Carrazza fended off the Japanese driver for much of the last two laps, but just as it looked like he’d got the job done, Miyazono slipped up the inside of the final turn of the race to take the win by a nose.

That put Subaru up into second, two points behind Mercedes, with BMW and Toyota one and three points behind respectively, going into the double-points final. 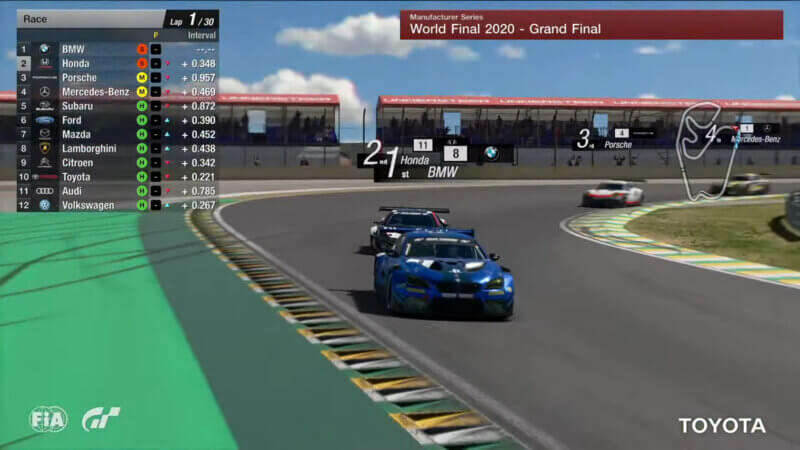 Qualifying expert Nicolas Rubilar put the BMW on pole position, just ahead of 2018 Nations Cup and 2019 Manufacturer Series champion Igor Fraga in the Honda. Points leader Mercedes sat in fourth, with Baptiste Beauvois, while Mikail Hizal in the Subaru was one spot behind.

Crucially though, Hizal was the first of the cars opting for the hard tires to take the race start and all eight hard runners predictably chose to pit at the end of the first lap to get rid. With such an early pit stop — in a 30-lap race — for much of the field, it lead to a pretty difficult to call race.

Rubilar and Fraga were unconcerned at the front, making hay on the soft tires before pitting on laps eight and nine. That gave the lead to Angel Inostroza, running very long on the medium tires in his Porsche, while Beauvois — who should have been harrying the Chilean — made the odd choice to pit for hard tires mid-race.

Meanwhile Mazda was having a good race at last, as Ryota Kokubun, the only early hard-stopper to pick softs, was carving through the field into third. Rubilar was able to make his own new set of soft tires count as he re-passed Inostroza for the lead on lap 10.

The traditional quiet middle portion of the race had quiet a varied pack, thanks to some three-stops, some two-, and Porsche only on one, but gradually the race started to trend towards the Subaru. Having made all of his required stops, and with plenty of fuel and tire life to reach the end, Hizal was sixth on the road but the highest-placed car not needing to visit the pits again.

This slowly became apparent during the final ten laps, as car after car peeled off ahead of him. As BMW pitted, Hizal and Fraga were in the top two spots and side-by-side on the circuit. Despite a tire advantage — softs to mediums — Hizal chose to stay behind the NSX knowing Fraga needed to pit on the final lap for hard tires.

That duly happened, leaving Subaru to take the flag and the overall win, with BMW in second and Mercedes third. Despite Fraga’s excellent drive, Honda could only place fourth.

With victory, Hizal becomes the second driver to complete the Nations/Manufacturers double — after Fraga — and the first to achieve the triple including the GR Supra GT Cup. It also means Miyazono retains his extraordinary 100% record across 2020, and tomorrow’s Nations Cup gives him the chance to keep that going.

Andrew Evans · Dec 19, 2020· Comments
Michelin, official Tire Supplier and Technical Partner of Gran Turismo, is staging a special online competition for players in south-east Asia and Oceania, with an all-expenses paid experience at Yas Marina, Abu Dhabi, for the winner.

Andrew Evans · Dec 19, 2020· Comments
A new set of Gran Turismo Sport Daily Races is now available, with the unannounced change to a four-weekly cycle now seemingly the standard from this point forward.

Andrew Evans · Dec 19, 2020· Comments
Following on four weeks from the last set, a new set of Daily Races is now available in Gran Turismo Sport as players get used to the new scheduling for the 2017 title.

Andrew Evans · Dec 19, 2020· Comments
For the first time in nearly a month, there’s a new set of Daily Races in Gran Turismo Sport for players to enjoy for the foreseeable future.

Andrew Evans · Dec 19, 2020· Comments
It’s the inevitable fate of any game that, once it is succeeded, it will eventually wither away as support is withdrawn. While this process usually takes months at a minimum, GT Sport seems as if it could be sidelined in record time.

Andrew Evans · Dec 19, 2020· Comments
Despite being superseded by Gran Turismo 7, GT Sport’s Daily Races seem to be continuing on their weekly cycle — for the time being at least.

Andrew Evans · Dec 19, 2020· Comments
Although Gran Turismo 7 is now out, GT Sport shows no signs of slowing down any time soon, with a new set of Daily Races now available to players.

Andrew Evans · Dec 19, 2020· Comments
Gran Turismo Sport will finally be superceded by Gran Turismo 7 this week, but there’s still plenty to be getting on with in the current title — starting with a new set of Daily Races.