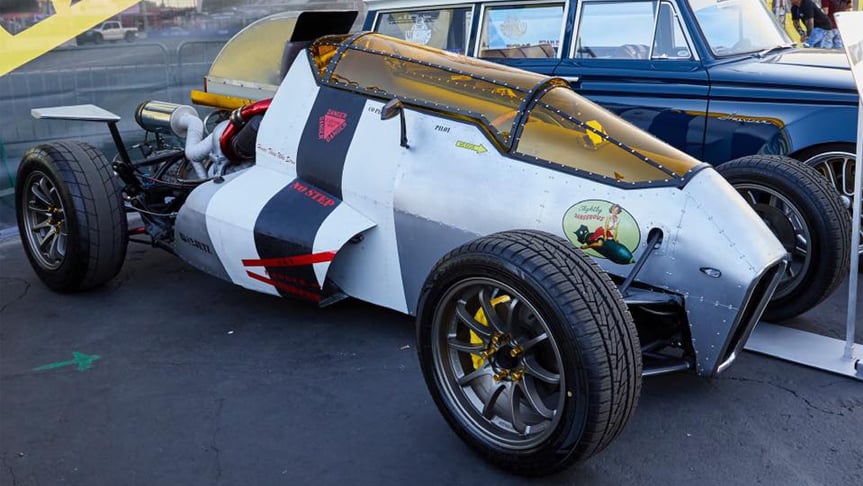 This year marks the 50th anniversary for the Hot Wheels brand. To celebrate, Mattel kicked off a 15-city tour back in April to find a custom vehicle that embraced the Hot Wheels style. The winner would then get the honor of their car joining Hot Wheels die-cast fleet. Now, after several months of competition, we finally have our winner.

The final selection for the Hot Wheels Legends Tour came at this year’s SEMA show in Las Vegas, Nevada. There, Hot Wheels displayed all 15 regional winners for the show attendees to check out. We even swung by the booth for a peek at the contestants too.

Anyone viewing the collection might have thought they were having a bizarre dream. The rather random selection of vehicles blurred the lines between real cars and toys. There were vehicles like a Geo Track sporting a blown Chevy small block, a custom Dodge school bus, and a hot rod with a knight’s helmet on it.

One car stood out to the judges over all the others – the Two Jet Z from builder Luis Rodriguez. 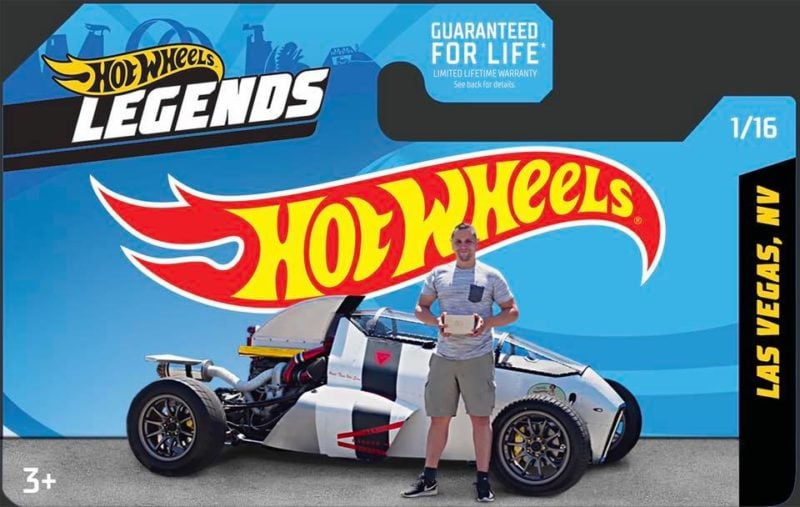 Part Ariel Atom, part fighter plane, the Two Jet Z certainly sports a unique look. Underneath the car is a custom chrome-moly frame, while Rodriguez hand made aluminum panels for the body. It also uses a liftable canopy in lieu of doors to really give it that aircraft feel.

The real magic happens out back where the engine is located. As the name suggests, the Two Jet Z uses a Toyota 2JZ out of a Supra. It’s far from stock though. For normal driving around town, the Two Jet Z has a mere 525hp. However, with a flick of a switch, the boost increases and bumps it up to 627 ponies.

Another trick the Two Jet Z has up its sleeve is its muffler. In an interview with Donut Media, Rodriguez says it’s connected to the accelerator pedal. That might seem odd, but when he steps on the throttle, it opens up a vegetable steamer that changes the exhaust note. It also spits out flames, which is always cool.

It’s a unique build for sure and we are excited to see what it looks like in toy form. Unfortunately, Hot Wheels did not give any indication when it would hit store shelves. We think sometime in the next year seems reasonable though.

With any luck, the Two Jet Z could also join other Hot Wheels vehicles in Forza Motorsport or Forza Horizon. In the meantime, if you want to see the car for yourself and watch it run, you can check out the video below:

Andrew Evans · Nov 7, 2018· Comments
The LEGO Group has announced the new sets it will produce for the 2023 Speed Champions range, revealing the McLaren Vision Gran Turismo-inspired Solus among the five sets on offer.