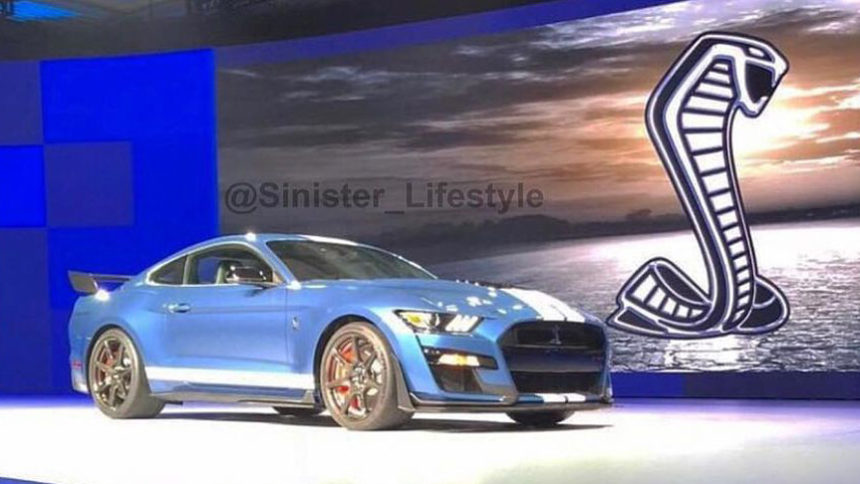 When we first found out about the Shelby Mustang GT500 back in March, we were pretty impressed. Then in May, we got another sneak peek at it. Now thanks to the a sneaky Instagram user, we get to see it in all its glory.

Officially the GT500 is on track to makes its debut next year. However, recently Ford hosted a meeting at its headquarters in Dearborn, Michigan to show it off.

The details on the meeting are still a bit of a mystery though. The leading theory suggests it was with the dealer network. We’re sure they were thrilled to hear about the lack of cars in the Ford lineup too.

The leak comes courtesy of 20-year-old Kyle Yaldo of Detroit, Michigan. However, Yaldo is not the originator of the images. Instead, he claims in his Instagram post that someone sent him the pictures via direct message in the app.

The New 2019/2020 Ford Mustang Shelby GT500! If you work at a Ford dealer and will sell me this car at MSRP please direct message me! I will leave a deposit today! 👍🏼👍🏼 (Disclaimer: Photos were sent to me via Instagram direct message. I am not the originator of this photo. Only a repost with my watermark)

Yaldo also uses the photos to make a plea for a dealer to sell him the GT500 at MSRP. If this seems like a bit of a laugh, we think Yaldo is serious about it. Looking through his other fleet of cars we see that he’s not one to shy away from fast vehicles. Just a few highlights include a Camaro ZL1 and Corvette Z06.

As for what that MSRP is, we still don’t know. But considering the GT500 is on track to get 700 or more horsepower, we think somewhere in the $80,000 range is reasonable. This would put it on par with cars like the Dodge Demon.

Drag racing doesn’t look like its the GT500’s objective though. With those big wheels, crazy aero package, and wide tires it looks poised to eat up the road course.

Unfortunately, we will need to wait and see exactly what the GT500 has in store. We shouldn’t need to wait long though. Chances are it will break cover at the North American International Auto Show in January.

After that we expect it to hit the streets sometime in the latter half of 2019.

FordShelby GT500
43 Comments Discuss this post in our forums...
Test Your Badge Knowledge With Our Car Logo Quiz

Automotive News 138 Jan 19 by Andrew Evans
If you’ve always fancied the Porsche Taycan but found the $100,000 starting price to be a little eye-watering, there’s some good news for you. Porsche has now confirmed that the…