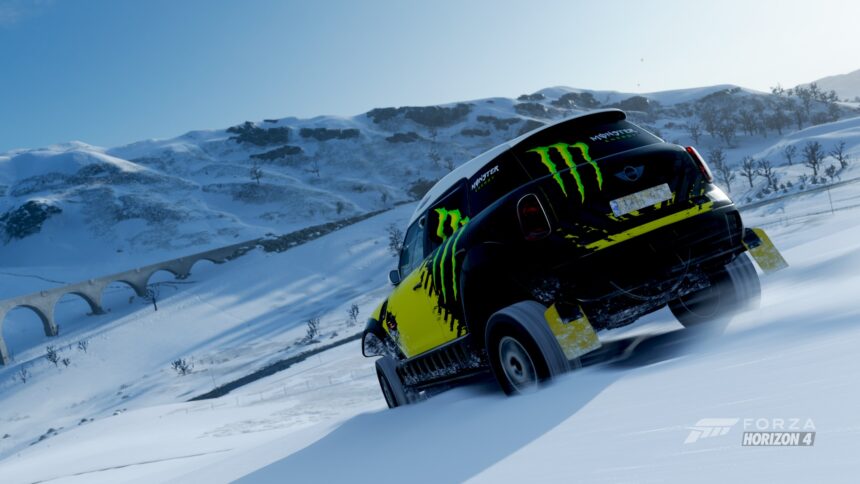 Winter has blanketed Forza Horizon 4 yet again. Once more fans can look forward to a new selection of events and content across Britain, including new exclusive rides.

Let’s jump into what lies in store this week.

Mini Returns to The Forefront

A new Playlist update means new prizes for completing the latest season to 50% and 80%. This week is mostly off-road themed.

Mini once again stars. We saw a lot of the models at the beginning of the month during the Series 9 Preview, and multiple cars from the brand show up here. 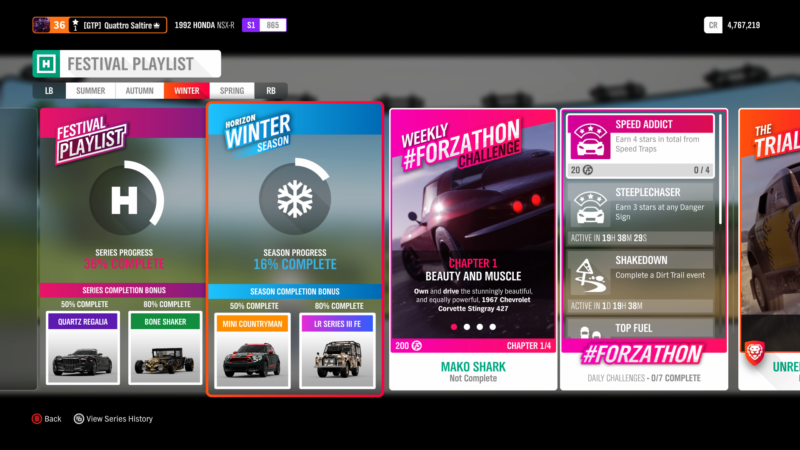 Mini is front and center once more this week, with three cars up for grabs.

First up is the 2018 Mini John Cooper Works Countryman. This beefed-up SUV may lack the “mini” dimensions of its badge, but it has plenty of firepower to silence critics.

Its 2.0-liter turbocharged engine is taken from the standard Mini JCW hatchback. Sadly that means it isn’t the just-refreshed model, which features over 300hp. Nonetheless, 228hp is nothing to sneer at, and the four-wheel-drive Countryman has the power and grip to tackle the winter roads.

Next is the Mini JCW Buggy. This Dakar rally raid machine is one of the most extreme cars to wear a Mini badge. Powered by a 3.0-liter straight-six diesel engine from BMW, the JCW Buggy will batter just about any terrain into submission.

The final Mini up for grabs is the X-Raid Countryman. A successful car on the Dakar Rally, the X-Raid comes with a similar twin-turbocharged straight-six diesel engine. With a strengthened four-wheel-drive system, the X-Raid should be a safe choice for drivers. This can be won in the Trial event “Unrelenting Force”.

Another prize is the Land Rover Series III Forza Edition. This special version of the iconic Defender comes with a Destruction Skills boost, should players want to cause some countryside mayhem.

Lastly, the Porsche 914/6 makes a return to the prize pot this week. The little roadster can be obtained by winning the “Deutschland’s Finest” championship.

The rest of the events are below: 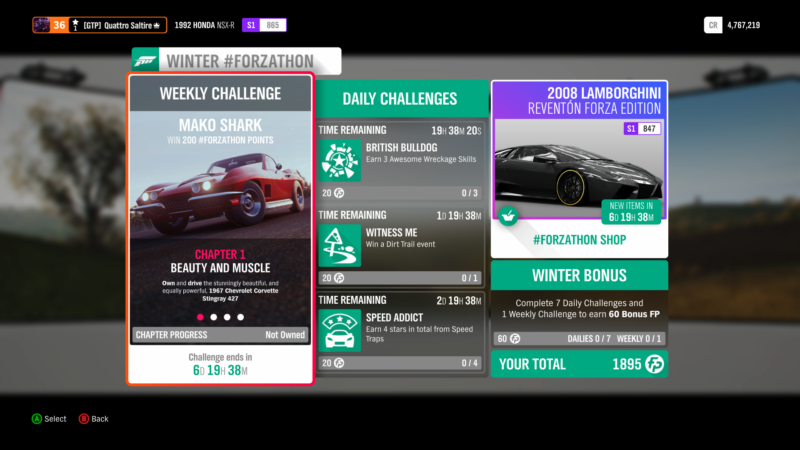 Forzathon has gone all American this week. The spotlight has turned to the 1967 Chevrolet Corvette Stingray 427. For the first objective, you simply have to own and drive this iconic American classic.

Unleash that big-block V8 engine for the second objective, as you’ll need to earn 15 Awesome Speed skills. The third objective requires some skilled driving, needing a total of 125,000 Skill Points.

Finally, light up the back tires and earn 9 stars from Drift Zones to finish this week’s challenges. 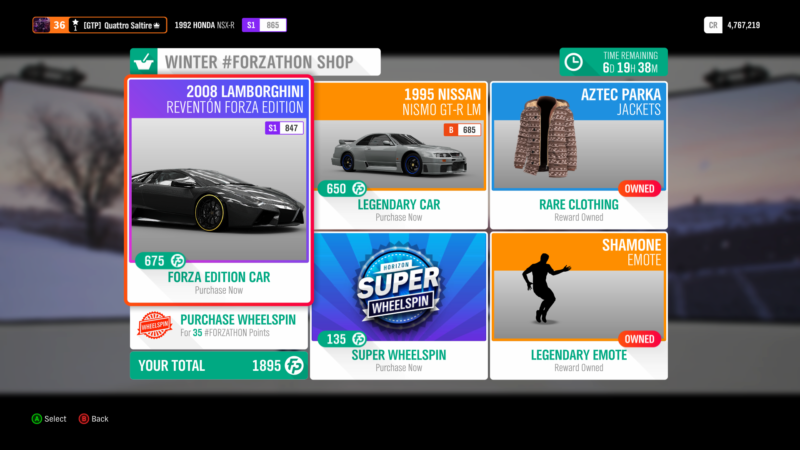 A thoroughly modern lineup graces the Forzathon Shop this week. Leading the way is the 2008 Lamborghini Reventon Forza Edition.

Based on the Murcielago, the very angular Reventon features a howling 6.5-liter V12 and styling inspired by stealth fighter aircraft. It also comes with a Speed Skills boost for those looking to tame this monster. Coming in at 675 Forzathon points, it will make an excellent addition to anyone’s Forza Edition collection.

Joining it is the 1995 Nissan Nismo GT-R LM. This limited-run R33 Skyline is considered one of the special unicorn cars around. Distinguished by the widebody kit, the GT-R LM comes with Nissan’s legendary 2.6-liter twin turbocharged straight-six.

Unlike the standard R33 GT-R, the LM comes with rear-wheel-drive. At 650 FP, we advise looking at spending on Wheelspins or checking the Auction House for a better deal.

Clothing and novelty items up for purchase this week include the Aztec Parka jacket and the Shamone dance emote.

Forza Horizon 4 6 Jun 29 by Gary Slater
Playground Games has given us a preview of the next update for Forza Horizon 4. After unforeseen circumstances and a technical hiccup disturbed the release of Series 23, the livestream for…