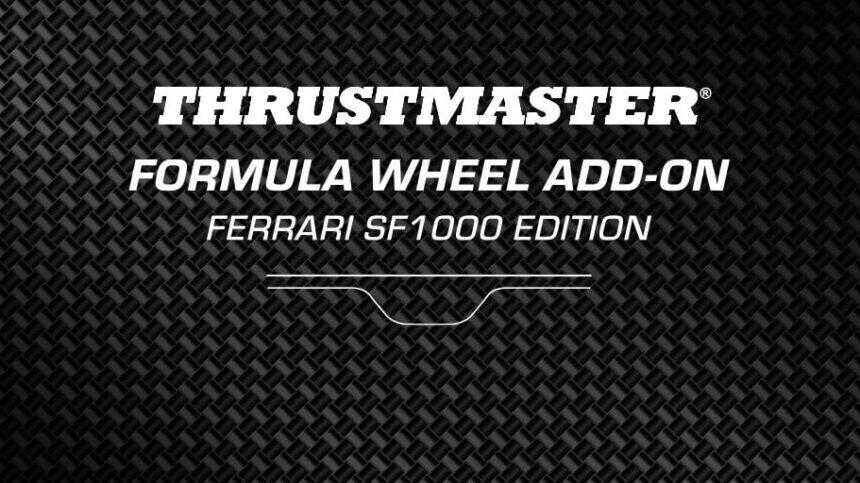 Thrustmaster has confirmed that its new wheel, due to be revealed tomorrow, will be a Ferrari SF1000 Edition model standalone wheel.

We first saw the wheel teased last December, when Thrustmaster revealed the unit in heavy shadow. The rough layout and paddle location was enough at the time for us to speculate it could be a replica of the wheel the Scuderia Ferrari outfit used in its 2020-season SF1000 cars.

A further teaser in February revealed more and all-but confirmed that it was a replica of either the SF1000 or its very similar SF21 successor, with almost identical button and dial layouts to the wheel used by Charles Leclerc and Sebastien Vettel last year.

Even if the previous images weren’t a bit of a giveaway, it makes a lot of sense that Thrustmaster would be creating another Ferrari replica formula wheel. The company is an official partner of the Ferrari Driver Academy Hublot Esports team, which races in the F1 Esports Pro Series, and which will field a three-time champion driver line-up of Brendon Leigh and David Tonizza this season.

Thrustmaster has some form on the Ferrari-replica front too. Back in 2011 it created another add-on wheel for that year’s Ferrari 150° Italia F1 car, though much of that wheel’s design was decorative. The SF1000 wheel appears to have fully functional dials, switches, and toggles, as well as a huge LCD information screen.

We’ll have to wait until tomorrow to find out the full spread of information on the new wheel, including what bases are compatible and — most importantly — the price. Watch this space…

FerrariThrustmaster
82 Comments Discuss this post in our forums...
Test Your Badge Knowledge With Our Car Logo Quiz