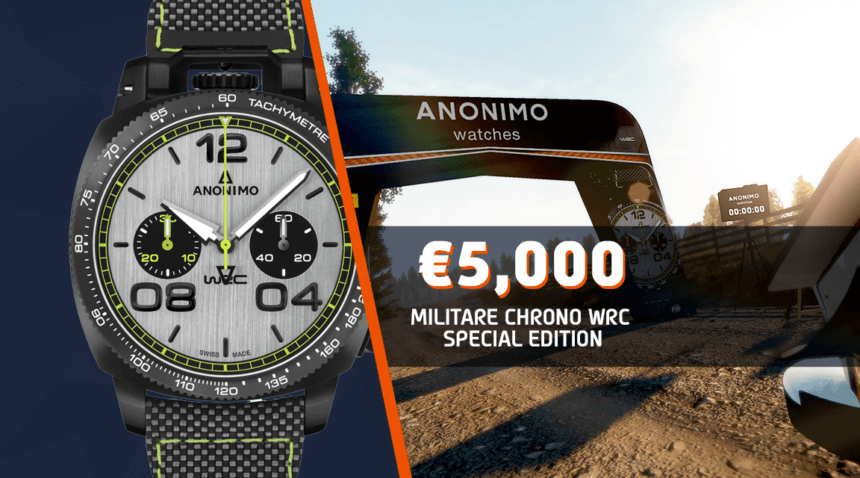 If you’re at a loose end over the next week, WRC 9 has a rather interesting competition open to all players. A special in-game time trial event could see you walk away with a pretty expensive prize.

KT Racing has teamed up with watchmaker Anonimo for the event, which is free to enter and open to all players across all platforms. The Italian horologist is the official timing partner of the World Rally Championship, so it makes for a rather appropriate partner to the official game of the championship.

This event goes by the name of the Anonimo Christmas Challenge, and it’ll run from December 24-30. It sounds like a pretty simple affair, consisting of two runs at two special stages, both in Finland. First you’ll have to take on the Arvaja Reverse stage, then the Laukka stage. After that you’ll retrace your steps, with Arjava followed by Laukka Reverse. Both will feature the most extreme weather conditions possible, although the exact conditions are a secret.

It’s not entirely clear how many prizes are on offer or how you win them. KT Racing only refers to “the most talented players”, which likely means the fastest aggregate times, though we don’t know if that’s overall or on each platform. Nonetheless the prize itself is pretty impressive. It’s an Anonimo Militare Chrono WRC Edition, worth €5,000 ($6,000/£4,500).

As you might expect, the WRC Edition is a licensed product derived from Anonimo’s existing Militare Chrono watch. This uses a Swiss Sellita SW-300 movement, which you can partially see through the rear of the watch via a dark gray tinted sapphire case back that bears the WRC logo.

The competition opens across PS4, PS5, XB1, Xbox Series, and PC on December 24, and you’ll only have six days to set your stage times.

Esports 15 May 14 by Andrew Evans
The 2021 International GT League World Series is set to stage its third selection event, the Vintage Challenge, later today and you can catch it live right here on GTPlanet.…

Gran Turismo Sport 121 May 13 by Andrew Evans
If you want to represent your country at an Olympic level for Gran Turismo, your chance is finally here. The official Olympic Virtual Series Time Trial for GT Sport starts…