Kazunori Yamauchi has taken to the PlayStation Blog to announce a new-look format for the upcoming 2021 FIA Certified Gran Turismo Online Championship, the fourth season of the flagship esports competition. As we were able to reveal last month, this year’s championship will remain online only, and with that in mind Polyphony Digital has delivered a shake-up to proceedings.

For 2021 there’ll be two separate stages of online qualifiers, each coming in at ten races long. The first batch of online races will cover ten weeks from Wednesday April 21 through to Saturday June 26, while the second round runs over 11 weeks from Wednesday July 7 to Saturday September 25, with Nations Cup on Saturdays and Manufacturer Series on Wednesdays. It’s not entirely clear why there’s an extra week for round two just yet — with the gap occurring on July 21 and July 24 — though in the past these spare weeks have accommodated a World Tour event or a game update.

Alongside the online competition itself there’ll be an accompanying “World Series”. This will consist of four events, each of which will be broadcast on the official Gran Turismo channels, along with a mid-season playoff called the “World Series Showdown”, and the World Final itself. Participants in the five World Series events will earn points that will carry over to the World Final. The broadcast schedule for this, with the races themselves likely around two weeks earlier, is as follows: 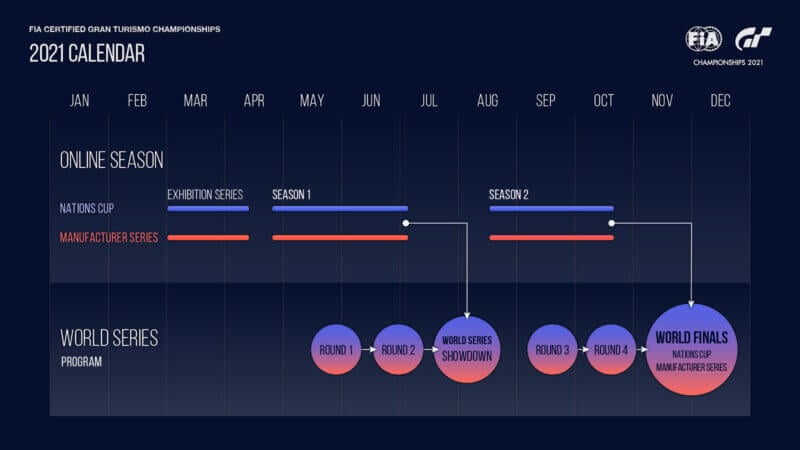 The qualification process is a little complex, but ultimately it comes down to a mixture of 2020 World Final performance and 2021 online rankings. For the World Series Round 1 and Round 2, Polyphony Digital will take the top players from the 2020 World Final. This will be the top 16 players in the Nations Cup and the top 12 individual players, limited to one per manufacturer and only where they have chosen the same manufacturer for 2021, in the Manufacturer Series. The top three in each round in each series will earn World Final points, with three for the winner.

That all changes for the World Series Showdown. For Nations Cup, the 16 players who raced in the first two World Series rounds will be joined by 16 players from the first round of online qualifiers, with six from Europe/Middle East/Africa, three each from North America and Asia, and two each from Central & South America and Oceania — limited to a maximum of two from each eligible nation. Manufacturer Series will exclusively draw its Showdown squads from the online qualifiers, with the top 12 brands — two of which must be Toyota and Mazda — qualifying with the usual three-driver teams.

As well as offering points for the top ten finishers, with 10 for the winning driver and team, the Showdown will govern who advances to the third and fourth rounds of the World Series. The top 16 Nations Cup drivers in the Showdown, and the top 12 individual drivers from the Manufacturer Series, again limited to one per manufacturer, will qualify for these events. This also guarantees a spot in the World Final for the Nations Cup drivers, but not the Manufacturer Series teams.

The World Final itself will follow a similar style, drawing 16 drivers from the Nations Cup online qualification second phase — by the same regional criteria — as well as the 16 qualified drivers from the World Series Showdown. Manufacturer Series will depend exclusively on the second phase of online qualification to select its 12, three-driver teams — and again this must include Mazda and Toyota. That will then culminate in an evening’s racing in each series, with the winners determined by the points accumulated across the four World Series rounds, the World Series Showdown, and the more lucrative races in the World Final itself.

In addition to the two main series, the World Final will once again stage the final of the Toyota championship. However, it’s worth noting that Yamauchi refers to this as the “Toyota Gazoo Racing GT Championship”, which could hint that it will no longer be a GR Supra-exclusive series and may expand to include other Gazoo Racing vehicles like the GR Yaris.

We’ll bring you a full calendar of events for stage one of the online qualifiers when it becomes available.