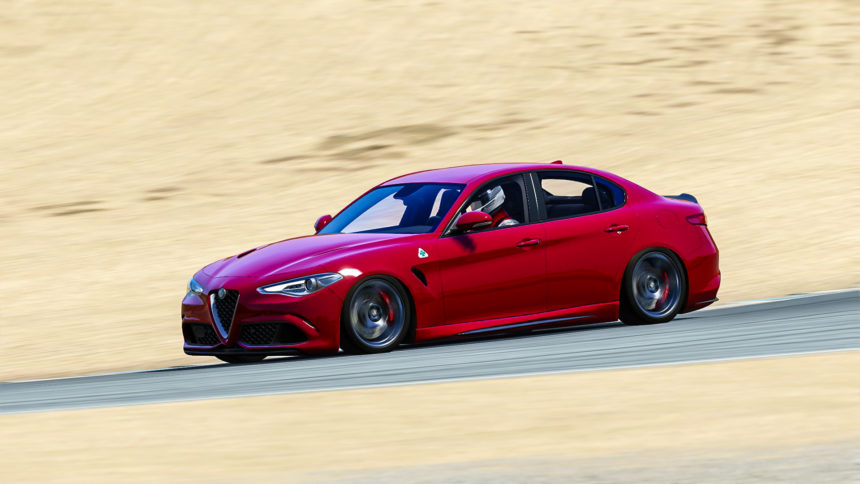 Last week saw the release of Bonus Pack 3 for Assetto Corsa. With it comes seven all-new vehicles and Laguna Seca. PC players are the first in line to sample the new content.

As the final major release for the game this year we couldn’t have asked for anything more. An all-Italian car roster makes up the majority of the free DLC, ranging from the beautiful Alfa Romeo 33 Stradale to the insane Pagani Huayra BC.

While console racers await 2018 for their opportunity, we fired the game up on PC to show off the new content. We’ve started with three of our favorites from the pack, all circling the infamous 2.2-mile ribbon of tarmac in Monterey.

First up is the Alfa Romeo Giulia Quadrifoglio. Announced toward the end of 2016, the Giulia is one of the more anticipated rides included in the pack. With a 2.9-liter twin-turbo V6 under its hood making 505hp, this four-leaf clover is nothing short of amazing.

With TCS and ABS systems enabled, the Giulia is light and controlled for a four-door sedan. The rear end hints at wanting to break in the opposite direction but never does. To put it bluntly, the car is very predictable through every corner. Disabling the assists is where the Quadrifoglio comes into its own.

With nothing standing in the way of its wilder side, the rear end comes undone at every possible opportunity. It’s an experience in and of itself, though it takes a few runs to warm up to. Whether the assists are on or off, the Giulia never feels like a four-door sedan. It feels sportier than several dyed-in-the-wool sports cars in the game, and that’s an impressive feat.

Where the Giulia is light and controlled, the Alfieri is heavy and loose. That is to say, even with assists the GT coupé is a handful. Power comes from a 4.7-liter V8 making 460hp so its adventurous handling should come as no surprise.

The Alfieri is the first and only concept car featured in the game. It’s certainly no outcast as it feels as polished as anything else. Its instrument cluster is a spectacle, reminiscent of a rotary dial. Did we mention the resemblance to the Birdcage 75th?

Celebrating Maserati’s 100th anniversary, the Alfieri straddles the line between adventurous and murderous. Funny enough, the car wants an aggressive driver to get the most out of it. The Alfieri doesn’t want a Sunday driver, or a calculated approach — it wants to slide around every corner.

It’s easy enough to control once you’ve made it past its violent personality, but know this: it doesn’t want precision, it wants chaos.

We aren’t going to mince words here: the 33 Stradale is a superstar, perhaps the most impressive of the group. You would be within reason to expect the Stradale to feel dated in comparison to the previous two cars. Much to our surprise, this classic Alfa is more responsive than we imagined.

It’s easy to dismiss as being skeptical, but for a late 60s sports car to handle as the 33 does is eye-opening. In the short time we spent with it, it never missed a beat. It’s fast and best of all, it feels fast. The 33 may not be as sharp or frustrating as the Lotus 3-Eleven, but it is more accurate than anything else featured here.

The 33 was a perfect end to an impressive lot of machinery. Where the other cars range from calm and collected to insane, the Stradale exudes class. Though that begs the question: would you expect anything less from a multi-million dollar classic?