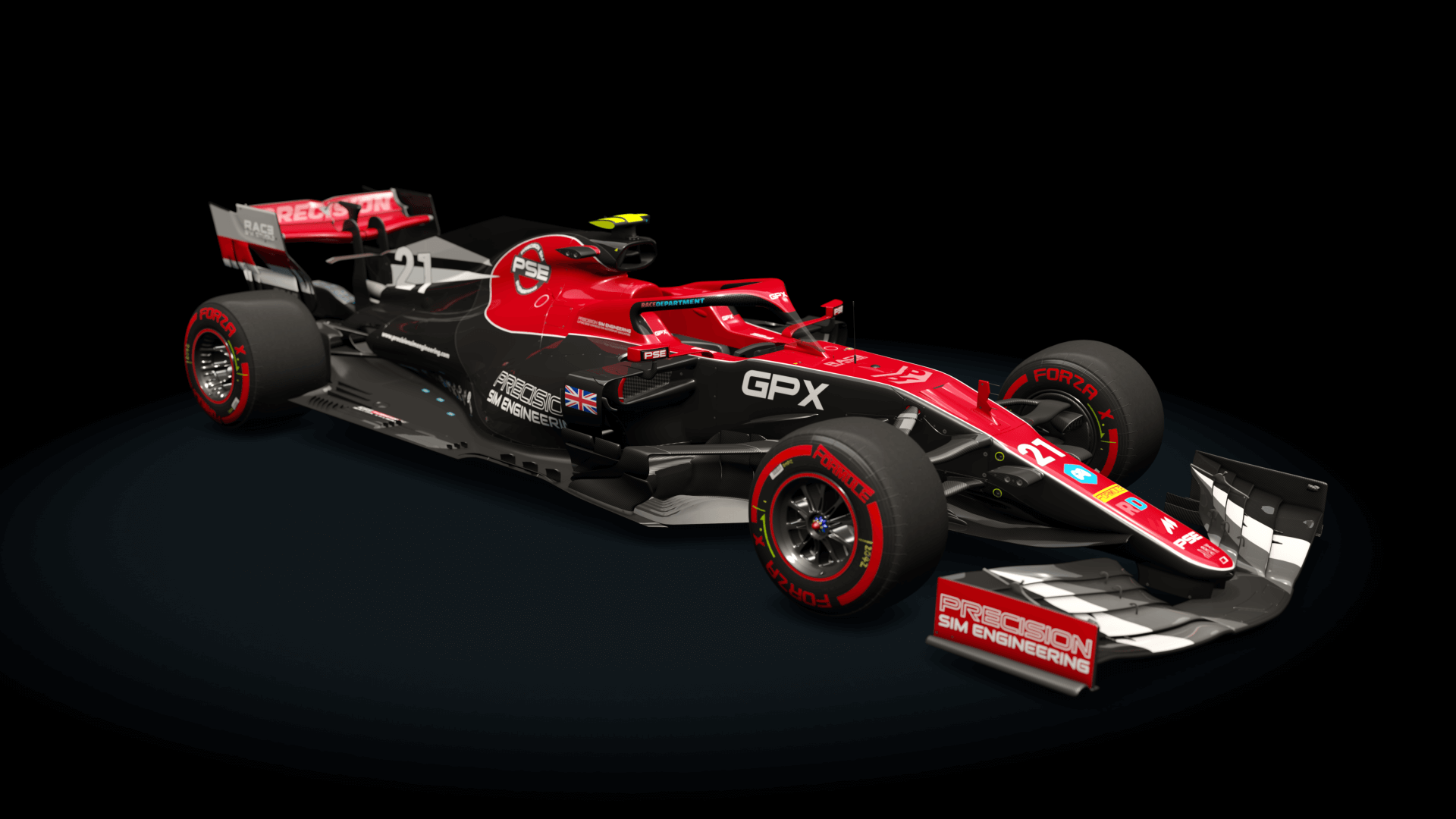 It’s been a while since I had the pleasure of a modern, high downforce car. Over the last few weeks, I’ve driven a wide variety of cars and games and had a great deal of fun. But, my primal need for some high downforce savagery hasn’t been satisfied… until now. Enter the 2019 Formula Hybrid.

Anyone that owns Assetto Corsa on Steam, will almost certainly know of Race Sim Studio. I, amongst many others, have waxed lyrical about its mods. I even stated it’s the best modding team around in my previous article on the excellent Formula RSS 2000. In truth, I think RSS could release a VW Beetle and I’d still be stupidly excited.

As with all Race Sim Studio releases, the 2019 car immediately oozes quality. Before hitting the race button, it’s easy to spend a whole lot of time admiring the model. Each tiny aerodynamic piece is modelled to a standard you don’t often see in big budget games, let alone mods. Even the tire warmers are a piece of art for goodness sake! All this before you even get in the car.

Once you finally do hit race, you’re presented with more delightful details. The steering wheel, in particular, is stunning. The buttons, knobs and exposed carbon fiber look so real that it feels like you could reach out and touch them, especially in VR.

Anyway, that’s enough salivating over the modelling. It’s time to bring your attention to how it drives. In short, it’s a modern F1 with astounding grip and power. The long story is a little more complex.

When compared to the previous Formula Hybrid, it’s immediately clear that the 2019 car is a step forward in performance. Straight away, there’s a clear improvement in power delivery. Previously, it was as if there was a whole heap of turbo lag, making it quite unpredictable. With the change and extra power, the car is both more intuitive and more snappy. I think we can all agree that’s a recipe for fun… and a massive crash.

In as much as this is a modern F1 car, and I expect an incredible amount of high-speed grip, it’s still a shock to the system. It’s always a recalculation of what you think is possible when you get into one of these aero-hungry beasts. Just check out an onboard from Melbourne through turns 11 and 12 to see what I mean.

While the car is faster and more responsive, that performance step has affected it in other ways. Most noticeable is the nervousness at the rear. The previous car was quite friendly in that regard, playful even. It had a little more give in the way it moved around, but the 2019 car is much more snappy. It’s particularly noticeable in medium-speed corners, where you’re stuck between mechanical and aerodynamic grip.

As per usual with RSS mods, the force feedback is superb. It always feels just a step above everything else. Despite this car being more nervous, snappy and faster, the FFB still gives you enough confidence to try and push the envelope. Turns three and four at Bahrain are notoriously difficult to get a smooth exit. The car snaps and slides its way through them, but the feel allows you to walk the tightrope of grip.

This may be the third modern F1 car from RSS, but it’s clear it’s a different animal to the previous releases. It feels like a culmination of what the team has learned, taking the new regulations and creating this. I probably shouldn’t say culmination, because I’m sure RSS will find new ways to wow us, as it always seems to.

When you drive a car of this quality, it’s hard to imagine anyone doing a better job. And, yet again, Race Sim Studio has knocked it out the park, and all for less than the price of a beer in London!

Andrew Evans · Apr 10, 2019· Comments
In the latest example of the line between virtual and reality, a gamer has created a race circuit out of their own local roads for use in Assetto Corsa, using a technique known as photogrammetry.

Andrew Evans · Apr 10, 2019· Comments
A surprise update to the PC version of Assetto Corsa has landed today, and left something of a mystery in its wake.

Andrew Evans · Apr 10, 2019· Comments
Fans of classic, and long-absent Gran Turismo tracks can rejoice, as it’s now possible to race on them again. There’s one slight catch though: it’s not in Gran Turismo, or even on a PlayStation console.

Andrew Evans · Apr 10, 2019· Comments
If you’re an Xbox gamer and haven’t decided on whether to take the plunge on Assetto Corsa or not yet, there’s some good news. The racing sim from Kunos Simulazioni is now available as part of Xbox Game Pass.

Jimmy Broadbent · Apr 10, 2019· Comments
It’s quite amazing how fast the sim racing landscape has changed. In recent years, there has been a big shift in the PC sim racing community towards more licensed content. The shift has been so dramatic that even a title built for modding, rFactor 2, has had to move towards licensed content to survive. This never used to be the case.

Jimmy Broadbent · Apr 10, 2019· Comments
Michael Schumacher. That name will forever be synonymous with Formula One. That name could be the definition of success. He is a man that redefined the record books. A man filled with unrelenting desire and determination. He’s a man that became a hero to me and a legend to the world of motorsport.

Jimmy Broadbent · Apr 10, 2019
Whenever I see an alert telling me Race Sim Studio have released a new car, there’s this excitement that runs through my body. RSS is, in my opinion, the best modding team around. Everything it has released has been of a quality you’d expect from a game developer. I could make an argument for some of its mods being better than official Assetto Corsa content.

Michael Leary · Apr 10, 2019· Comments
Formula One is coming to the city of Miami for the 2019 season. Proposed earlier this month, F1 and the Miami City Commission met to approve plans for the GP. The current deal sees the circus running around the circuit for ten years, 2019-2028.