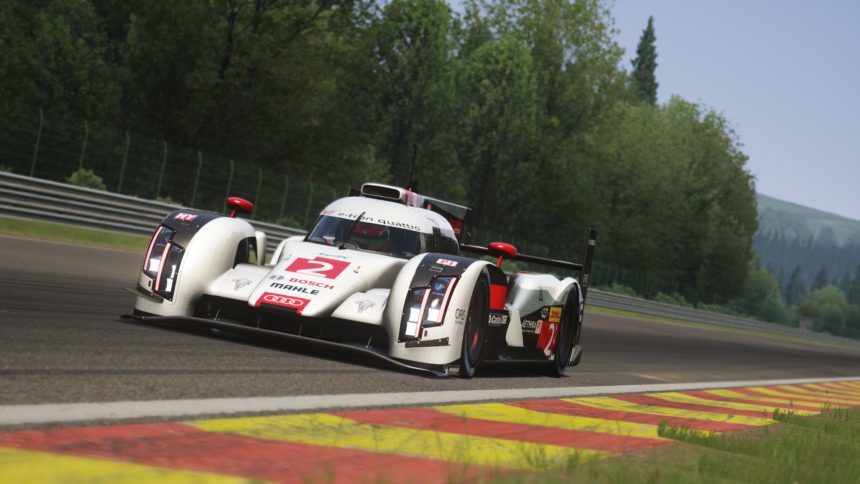 You know the story by now: last month the Ready To Race car pack made its way to Assetto Corsa. Included were 10 brand-new vehicles ranging from a “budget” supercar to two hardcore Le Mans prototypes. Throughout the week we’ve put seven of the ten vehicles through their paces. At last, it’s time to bring the series to a close with the final three — the extreme three.

As before, the liveries featured are not standard fare with the car pack when released for consoles.

At the onset the P1 GTR was the most disappointing of the bunch. The hyper McLaren darts around the track like a frenzied torpedo, albeit with the unfortunate side-effect of understeer. For a track monster as focused and intimidating as this one its performance felt off; underwhelming as a matter of fact.

The original feedback was going to hone in on this shortcoming, and viciously so. Then it occurred to us that something was in fact off; something that was hindering its quick-witted responses from shining through. Upon looking through everything we quickly discovered the culprit: traction control.

Now everything made sense. We suspect this was a factory setting, explaining the prized track machine’s frustratingly uncooperative and short-sighted performance. With the driver’s aid turned off, the P1 GTR really came alive and turned into an entirely different monster.

Pairing the machine alongside Imola seemed the perfect marriage as the McLaren would be able to showcase its technical prowess. Requiring finesse and a one-track mind, the almighty GTR firmly asserts itself as the most mind-bending of the group. Easily our first pick for a pure track day experience.

Next up is the first of two Le Mans prototypes, the Toyota TS040 Hybrid. What is there to say about a machine as blisteringly responsive as this one? If we had to pinpoint something it would be the element of second-guessing everything. While attacking corners is fairly easy, there’s a strange disconnect from any known danger. The resulting experience, while enjoyable, is uniquely chaotic.

Rather than being difficult to drive fast, the TS040 is difficult to drive consistently. There is a rhythm to its madness, and if disturbed, the punishment is severe. Fighting your baser instincts whilst behind the wheel is no easy feat. Letting off the gas or being heavy on the brakes are just two things one has to avoid; sticking it through is typically the best course of action.

Spa Francorchamps served as the ideal location, having hosted its fair share of endurance outings. The only problems arose from a lack of commitment through the faster corners. An example of the perfect racing machine, the Toyota is an absolute track menace in the right hands. If outright performance is what you’re after, the TS040 is in a class all on its own.

Finally, there’s the second of the Le Mans prototypes, the Audi R18 e-tron quattro. Its whopper of a name aside, surprisingly enough the R18 is an entirely different animal when pushed. Returning to Spa Francorchamps as equal footing between it and the TS040, the Audi feels faster and more direct but isn’t. While we’ll readily admit we were suffering from the same reservations, the R18 doesn’t feel as punchy around Spa.

While both machines are prone to fairly mild oversteer, the Audi feels lighter on its feet. As a result of that the rear end kicks outward ever so slightly. While that makes for an exciting moment it spits in the face of the intended purpose: precision. Of course, that isn’t to say the Le Mans-winning prototype can’t be fun as its raw capabilities are terrifyingly amusing.

Driven with considerable reservation — much more so than the Toyota — the Audi feels complete; it felt like nothing else in the pack, and considering the company that’s an impressive feat in our books. While neither prototype can officially venture to the 24-hour circuit, the home of the Belgian Grand Prix is a fine substitute. The final verdict? Driving the R18 establishes why the German automaker was such a dominant force at the event: it does everything perfectly.

The Ready To Race car pack is currently available on PC, with no confirmed launch window for consoles.