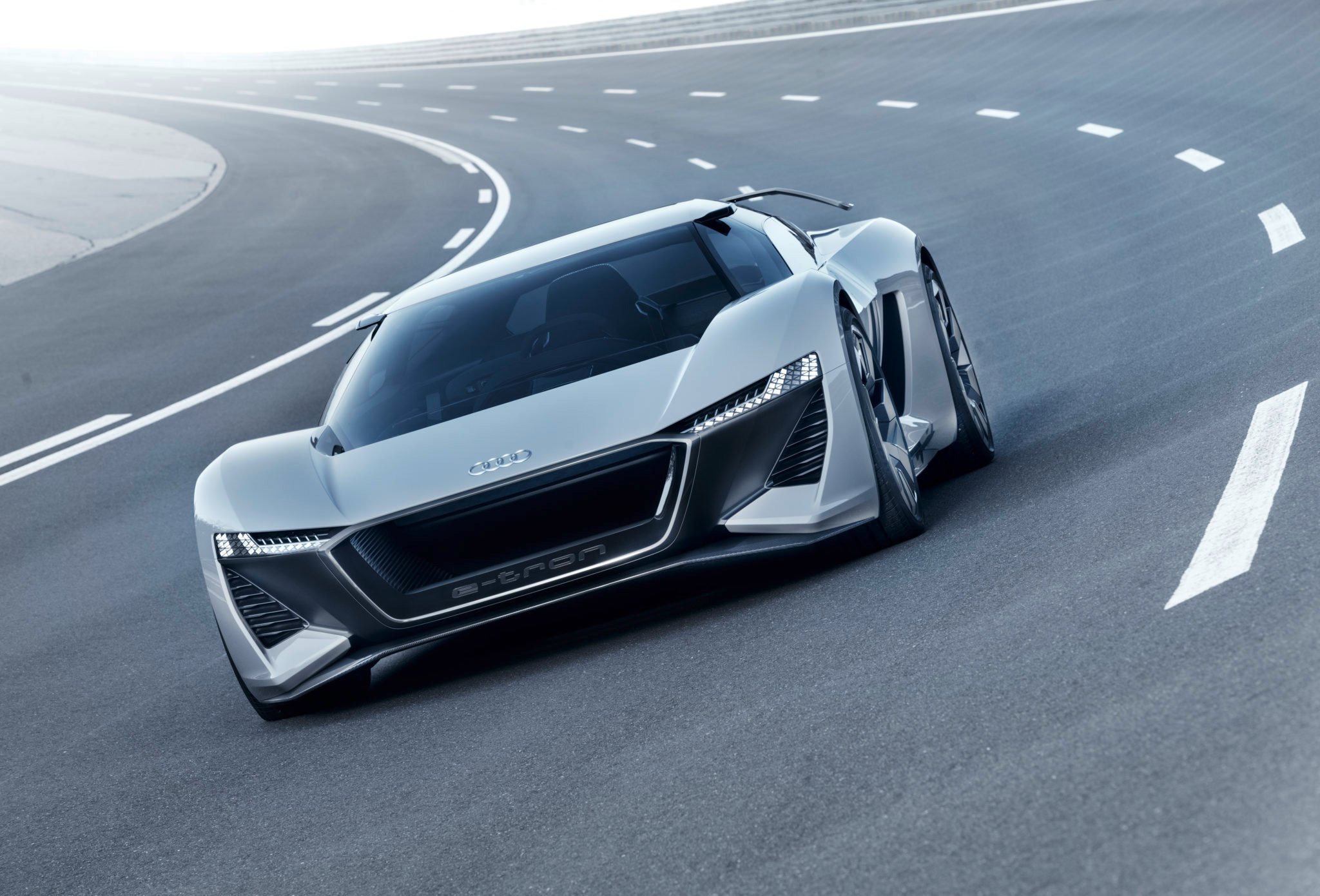 Audi teased us a couple of weeks ago with a carefully crafted image of a new concept car.

Called the PB18 e-tron, Audi presented it as a supercar concept for the 2018 Pebble Beach Automotive Week, based around lessons learned from the highly successful R18 e-tron Le Mans race car. It’s taken the covers off, just as promised, revealing something that the pitch didn’t quite do justice to.

PB18 is a supercar at its core. The layout is typical supercar, with a cab-forward design to accommodate an engine and transmission behind the driver. However, it’s powered by electric motors, freeing up a good deal of space that you might otherwise find a V10. The Audi Design Loft in Malibu has decided to maximize this space by extending the roofline backwards, almost like a shooting brake. The trunk opening though is more like that of a liftback.

Much of the rest of the design mimics the 2017 Audi Aicon concept, along with Audi’s recent Vision Gran Turismo. There’s some key differences though, which includes the car’s hood acting as a giant splitter, ducting air underneath and up and over the windscreen. Other, smaller inlets draw cooling air to the front brakes and the front motor.

The downforce trickery extends to the rear too. There’s a large rear diffuser, which can move downwards to increase downforce. On the top of the hatch there’s an active rear wing that can move both upwards and rearwards.

If a liftback supercar doesn’t sound strange enough for you, take a look in the cabin. PB18 is both center- and left-hand drive. This comes courtesy of a moving driver’s seat and steer, throttle and brake-by-wire technology.

When carrying a passenger, the driver can slide the seat and binnacle across to allow access to a second seat — which we presume could include right-hand drive options in relevant markets. Alternatively they can position the cockpit right in the middle for a race car experience.

In this center position, the driver can see right through the hood to the road directly ahead of the car. That means there’s no excuses for touch-parking, but also gives improved visibility of things like track limits. F1 drivers need not apply… Just ahead of the driver there’s a transparent OLED screen, which can give regular navigation information. Alternatively, it can function like an augmented reality system, giving the driver the ideal racing line when on track.

The PB18 e-tron is relatively small, at just 178 inches long and 45 inches tall, although it is 78 inches wide. This still gives room for two occupants inside the 106-inch wheelbase, and the liftback trunk allows for 16.6 cubic feet of cargo space — three times that of an Audi R8. There’s an exclusive luggage set Audi has designed to fill the space, and hold your expensive racing helmet safely.

Of course, much of this space comes from the absence of a petrol engine. The PB18 uses three electric motors, with one powering the front axle and two independently driving each rear wheel. These deliver a peak power output of 500kW (670hp), with a 30:70 front-rear split. There’s a temporary overboost facility that will allow brief spurts of 570kW (764hp). With 612lbft available, the PB18 will hit 60mph in around two seconds.

Audi doesn’t give a peak speed for the vehicle, but notes that in road use the driver can limit speed in favor of range. This is 310 miles on the WLTP cycle, due to a liquid-cooled, solid-state 95kWh battery. Audi has designed the car to accommodate 800V rapid charging, but it can also use wireless induction charging. This means that owners can install a charging pad underneath the car’s parking spot and top it up without plugging it in to anything. It also recharges via regenerative braking, with the car’s hydraulic braking system — with 19-inch carbon discs — only used for heavy braking situations.

There’s a focus on light weight with the PB18. That solid-state battery is lighter than conventional units, and of course Audi has used as many lightweight materials as it can in the body. You’ll find plenty of aluminum, carbon and composites in the PB18’s construction. All-in, the PB18 will read less than 3,420lb on the weighbridge.

One unusual area where Audi has saved weight is with electronic driver aids. Internally, Audi’s engineers referred to the car as “Level Zero”, suggesting how much a part autonomy plays in the car. Audi has been part of the big push towards more autonomous cars, including the more advanced level three cars like its A8. In PB18 though, there’s none of that, and Audi says that the driver is the one steering, and stepping on the gas or brake pedal.

That said, there are some standard assists, as you’d expect from a high-torque electric car. Torque Control and ESC manage the torque distribution the the four wheels, as a safety net.

Along with the electric power, the PB18 does feature some other LMP1-derived technologies. The R18 e-tron served as a model for the car’s suspension architecture. This means the car uses independent suspension front and rear, with push-rod on the front and pull-rod at the rear. Both have adaptive magnetorheological dampers.

The PB18 is the latest Audi model to use the laser high-beam and LED matrix headlights too. Also used in the R8, the laser headlights give a visible range of over 600 yards, which at speeds of around 200mph gives the driver around six seconds to observe and react to obstacles ahead. The LED units provide adaptive main- and dipped-beam functions, masking other vehicles so as not to dazzle them while maintaining maximum illumination on the rest of the road.

There’s no plans for the PB18 e-tron to make it to production. However, you can see it in the flesh at Pebble Beach across this week. Following the unveiling at Laguna Seca, it’s at The Quail all day on August 24 and Laguna Seca again on August 25. The final appearance at the event is at the Concours d’Elegance on August 26.

Andrew Evans · Aug 24, 2018· Comments
Gran Turismo series partner Toyota has revealed a special, limited edition version of its Toyota Yaris hatchback, which not only bears the Gran Turismo 7 name but comes with a free copy of the game and a PlayStation 5 console.

Andrew Evans · Aug 24, 2018· Comments
After it surprisingly revealed a new car at the Consumer Electronics Show (CES) in 2020, Sony has taken the covers off a second model at this year’s show — and it looks like it might be planning to build them.

Andrew Evans · Aug 24, 2018· Comments
Porsche has officially taken the covers off its Vision Gran Turismo car, designed specifically for Gran Turismo 7 when it launches on March 4.

Andrew Evans · Aug 24, 2018· Comments
MG’s specialist design center, SAIC Design in London, has created a new concept car that’s not only inspired by gaming, but a games room itself.

Michael Leary · Aug 24, 2018· 13 Comments
Although Lamborghini has now officially pulled the wraps off its latest nostalgia project, the Countach LPI 800-4, you’re already too late to buy one.

Andrew Evans · Aug 24, 2018· 21 Comments
Genesis has unveiled a trio of new racing car concepts designed in collaboration with Gran Turismo, destined to take their places in the racing game series in the near future.

Andrew Evans · Aug 24, 2018· Comments
Nissan has taken the covers off the latest model of its flagship performance car, the GT-R Nismo, ahead of its market launch later this year.