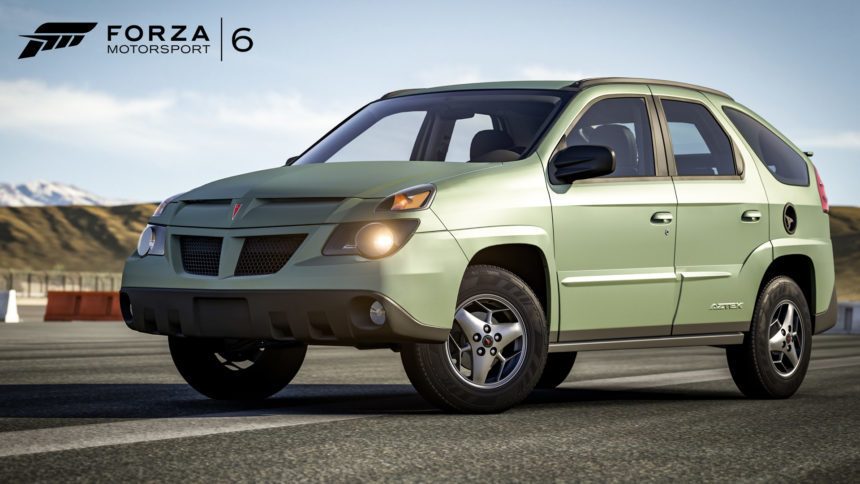 Your eyes do not deceive you. Parked up there, in all its light-green splendor, is the Pontiac Aztek. The chariot forever intertwined with one of the most interesting characters on TV in the last decade, Breaking Bad’s Walter White. Now, imagine it racing.

To celebrate the Rolex 24 Hours of Daytona, Turn 10 is releasing a new car pack slightly early, instead of the usual first Tuesday of the month. Understandably so, as the winner of last year’s race – the 2015 Ford #02 Chip Ganassi Racing Riley Mk XXVI Daytona Prototype – is the star car of the pack. The Riley chassis has racked up a seriously impressive eight consecutive D24 wins, and this marks the first game where players will be able to run the 2015 winner at the track.

The other racing car in the pack also hails from FoMoCo. The tube-framed Mercury Cougar battled in IMSA’s GTO category against the likes of Mazda’s four-rotor RX-7 (added to the game in December), with a young Robby Gordon behind the wheel (a name that should ring familiar to players of Forza Horizon 2). This particular version has the V8 installed; a turbo V6 was used for the tighter courses in the 1990 schedule.

Known more for stunning concept cars, Giugiaro penned the lines for one of Subaru’s most ambitious cars: the 1990’s Subaru SVX. Powered by the largest engine Subaru had yet made, the four-wheel-drive coupe mustered 231hp. Other than its fondly-remembered presence in the PlayStation 1 Gran Turismo games, it hasn’t shown its sleek shape in many others since, so the inclusion here will undoubtedly be a welcome one for fans.

The oldest car in the pack, the Sunbeam Tiger’s basic ingredients should sound familiar to most readers: take a pretty, petite British sports car, and get the late Carroll Shelby to drop an American V8 into it. A certain Jack Brabham instigated the pairing after talks with Ferrari went south, and the rest is history. The version included in the game is the final evolution of the vehicle, with the monster Ford 289 V8 barely fitting under the hood.

An import stalwart, the 1974 Corolla SR5 may barely crack the 100hp mark, but as one of the best-selling cars in the world at the time, it offered a blank canvas for enthusiasts to create their own take on performance. Popular with drifters then and now, it also has a performance pedigree, making it a great addition to the game.

Lastly, the Alfa Romeo Milano QV. As the last of the big Alfa sedans to be rear-drive, the Milano occupies a unique spot in the company history. Fittingly for a performance car, it has a 50:50 weight distribution, thanks to a rear-mounted gearbox. While the car failed to make a name for itself on the race tracks of the world in the WTCC 1987 season, that doesn’t mean it can’t be competitive in the hands of players.

The Alpinestars car pack launches tomorrow, January 28th. It will run $6.99 for the bunch, while Car Pass holders will get it for free.

Want to discuss this further? Head on over to our Forza 6 forums!

Forza Motorsport 6 DLC
The original comments for this post are no longer available.
Test Your Badge Knowledge With Our Car Logo Quiz