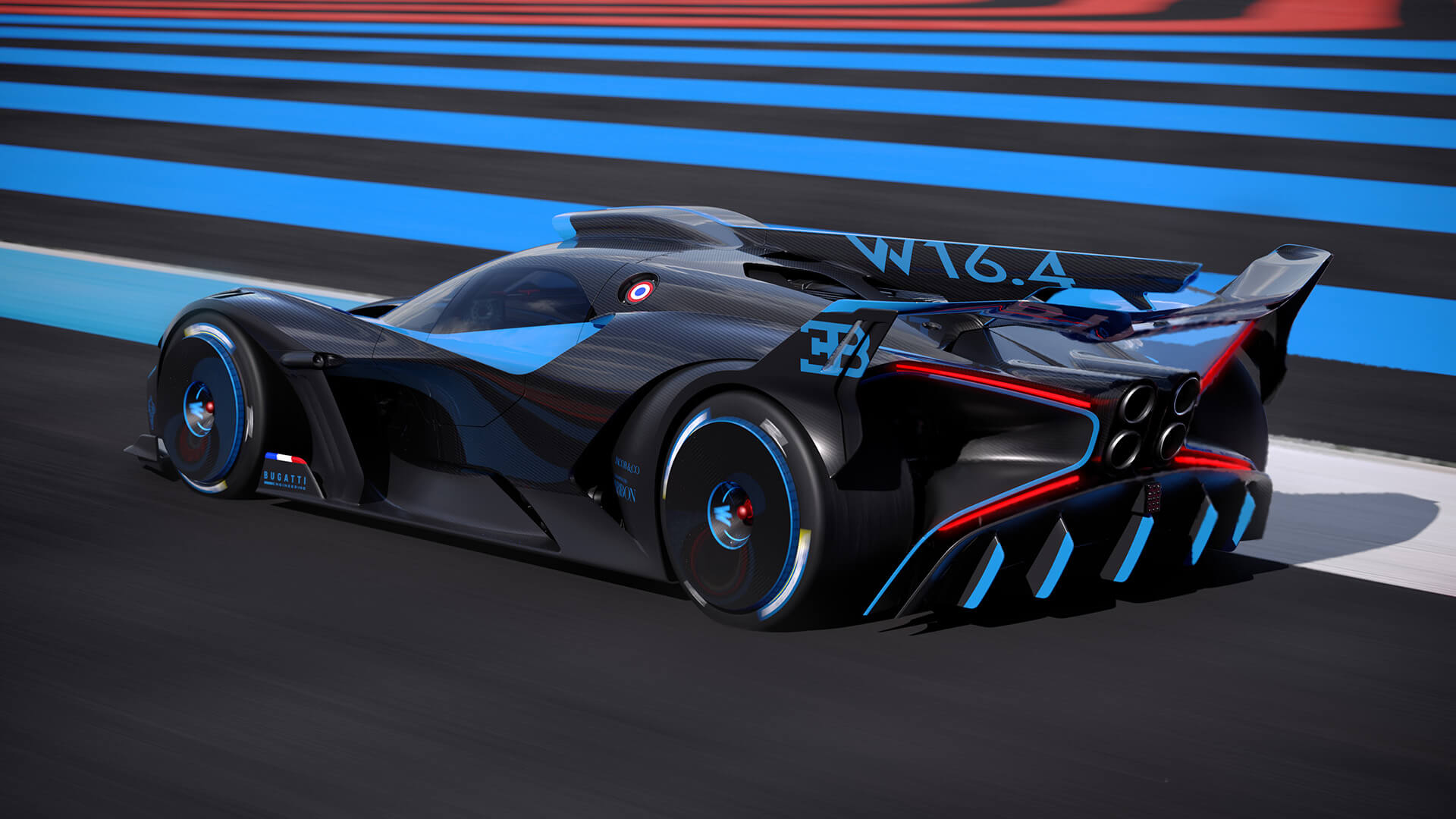 Bugatti has revealed the mystery car it’s been teasing over the past week. The company calls it the “Bolide” (pronounced “Bo-leed”) — Italian for “missile” — and it’s probably the most extreme interpretation of the Bugatti formula ever seen.

At its heart, Bolide is no different from any other Bugatti since the marque’s 2005 relaunch. There’s a massive, eight-liter, W16 engine in the middle, driving all four wheels through the seven-speed, dual clutch gearbox — identical to the Veyron and Chiron. It also has two seats, which Bugatti says is “the only luxury” in the car. That is where the similarities end. 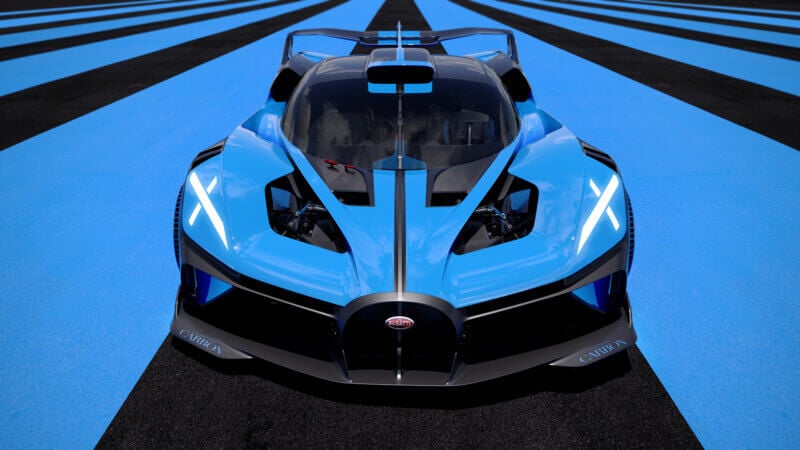 Everything else on the Bolide is a completely fresh design, right down to the chassis. That’s a new carbon-fiber monocoque with side impact and rollover protection that Bugatti says will meet FIA Formula 3 safety standards.

Bugatti employs all of the latest weight-saving strategies on the Bolide too. That means plentiful use of carbon fiber and 3D-printed titanium, from items like the auxiliary drive shaft to the suspension pushrods.

That continues to the unsprung mass too. The wheels are forged magnesium, coming in at 16lb (7.4kg) in the front and 18.5lb (8.4kg) in the rear. You’ll find carbon-ceramic racing brakes and lightweight brake calipers that come in at just 5lb (2.4kg) each. 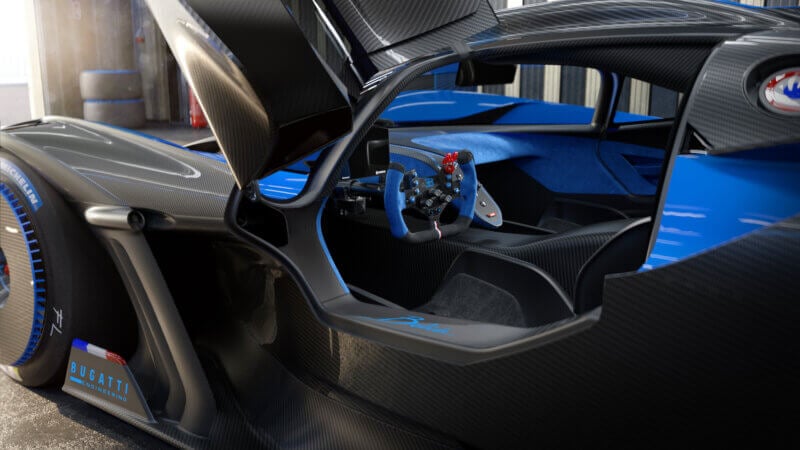 The Bolide’s weight is only half the story though. Bugatti has also implemented some extreme aerodynamic solutions. The entire car is only 39 inches (995mm) tall, and the whole body is designed to channel cool air to the engine and brakes, and warm air out and over the rear wing. One innovative feature is the outer surface of the roof scoop, which deforms to create bubbles at high speed and reduces drag by 10 percent.

While it may share the engine design, it’s not entirely the same unit. Bugatti has reworked the turbochargers and — to account for high lateral loads of up to 2.4g — redesigned the lubrication system. On regular pump gas, the W16 produces the same 1,578hp as the Chiron Super Sport 300+, but with 110 octane race fuel available, that goes up to 1,824hp.

To save you hunting for a calculator, that means that the power-to-weight ratio is an astonishing 1,497hp/ton — or the magic 0.67kg/hp figure Bugatti teased earlier in the week. Peak torque is 1,364lbft (1,850kgfm).

That should result in some pretty alarming performance figures, especially as the Bolide uses slick Michelin tires that are almost 16 inches (400mm) wide at the rear. However, Bugatti has only provided simulated figures, reckoning that the car will be “almost on a par with Formula 1” in terms of acceleration, and has a top speed of “well above” 310mph (500km/h). 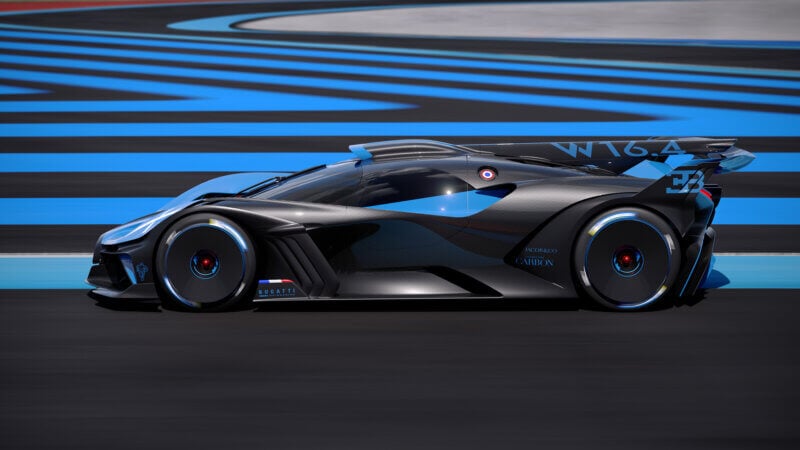 In addition to these raw performance figures, Bugatti has also simulated some lap times. It reckons that the Bolide would crack the Nordschleife in just over five minutes, at 5:23.1, but more interestingly it would conquer the Circuit de la Sarthe in 3:07.1 — eight seconds faster than the qualifying record in LMP1.

Indeed a lot of the car seems to have endurance racing in mind. There’s a compressed-air jack system and center lock wheels for tire changes and a quick refueling system. The Bolide is compatible with HANS and has a six-point racing harness, and an automatic fire extinguisher system. Access to the cabin is via LMP1-style butterfly doors. However, we wouldn’t put any particular money on the Bolide appearing in the Le Mans Hypercar category — though Bugatti hasn’t yet decided whether it’ll put the car into production.

“We asked ourselves how we could realise the mighty W16 engine as a technical symbol of the brand in its purest form – with solely four wheels, engine, gearbox, steering wheel and, as the only luxury, two seats. Important aspects of our considerations were fine-tuning our iconic powertrain without any limitations as regards the weight-to-power ratio.

“These considerations resulted in the Bugatti Bolide. An uncompromising experiment, a thoroughbred, a Pur Sang that, in its brute exclusivity, impresses above all with high performance, low weight, and a driving experience in a whole new dimension. Driving the Bolide is like riding on a cannonball.”

You can watch Bugatti’s presentation on the car in full below:

Andrew Evans · Oct 28, 2020· Comments
Gran Turismo series partner Toyota has revealed a special, limited edition version of its Toyota Yaris hatchback, which not only bears the Gran Turismo 7 name but comes with a free copy of the game and a PlayStation 5 console.

Andrew Evans · Oct 28, 2020· Comments
After it surprisingly revealed a new car at the Consumer Electronics Show (CES) in 2020, Sony has taken the covers off a second model at this year’s show — and it looks like it might be planning to build them.

Andrew Evans · Oct 28, 2020· Comments
Porsche has officially taken the covers off its Vision Gran Turismo car, designed specifically for Gran Turismo 7 when it launches on March 4.

Andrew Evans · Oct 28, 2020· Comments
MG’s specialist design center, SAIC Design in London, has created a new concept car that’s not only inspired by gaming, but a games room itself.

Michael Leary · Oct 28, 2020· 13 Comments
Although Lamborghini has now officially pulled the wraps off its latest nostalgia project, the Countach LPI 800-4, you’re already too late to buy one.

Andrew Evans · Oct 28, 2020· 21 Comments
Genesis has unveiled a trio of new racing car concepts designed in collaboration with Gran Turismo, destined to take their places in the racing game series in the near future.

Andrew Evans · Oct 28, 2020· Comments
Nissan has taken the covers off the latest model of its flagship performance car, the GT-R Nismo, ahead of its market launch later this year.