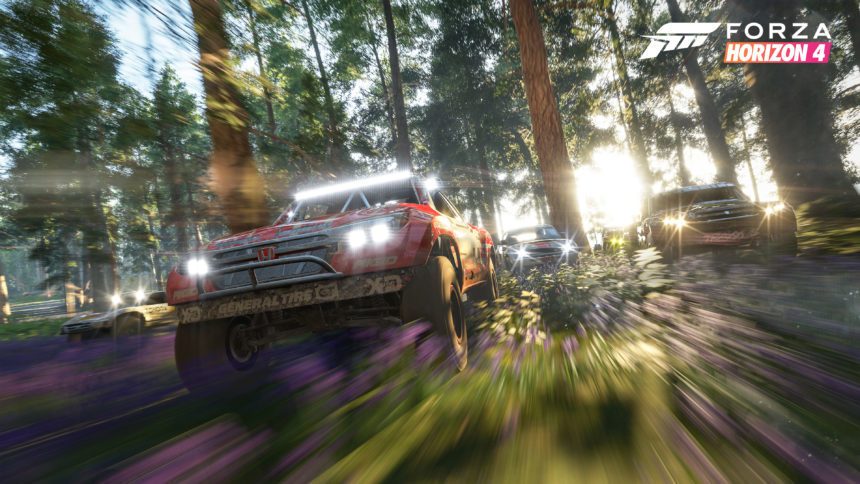 Last week we got a chance to check out what the winter map of Forza Horizon 4 will look like. Now with the snow gone, we finally get to see it in all its splendor as the preview of the seasons comes to a close.

As you’d expect, the map really comes into its own after the drab winter setting. With bright green hills and newly budding trees, it does capture the essence of springtime. Even the lighting gets a rework in the spring as well to mimic Britain in real life, which really brings it all together.

But what is spring without plentiful rain? We know the UK already can be a damp place (not counting this summer), but the spring months bring about even more moisture. This means standing water, muddy tracks, and even some flooded areas as you explore the map.

The new terrain deformation modeling really brings this to life too. During the stream, the team showed off the Jeep Trailcat taking a cruise through some of these areas. Seeing the big 40-inch off-road tires dig into the soft mud adds some nice visual depth to Horizon.

Another segment of the stream also showed off the main city in FH4, Edinburgh. Over the past month we’ve seen bits and piece of the city, but this week Playground Games gives us a real tour.

On the drive up to the city, you see a big, flat beach that runs along the North Sea. Also, you get to see the Bamburgh Castle dominate the surrounding landscape.

Bamburgh Castle is not just another piece of scenery either. According to Ben Penrose, the castle also doubles a multiplayer arena. 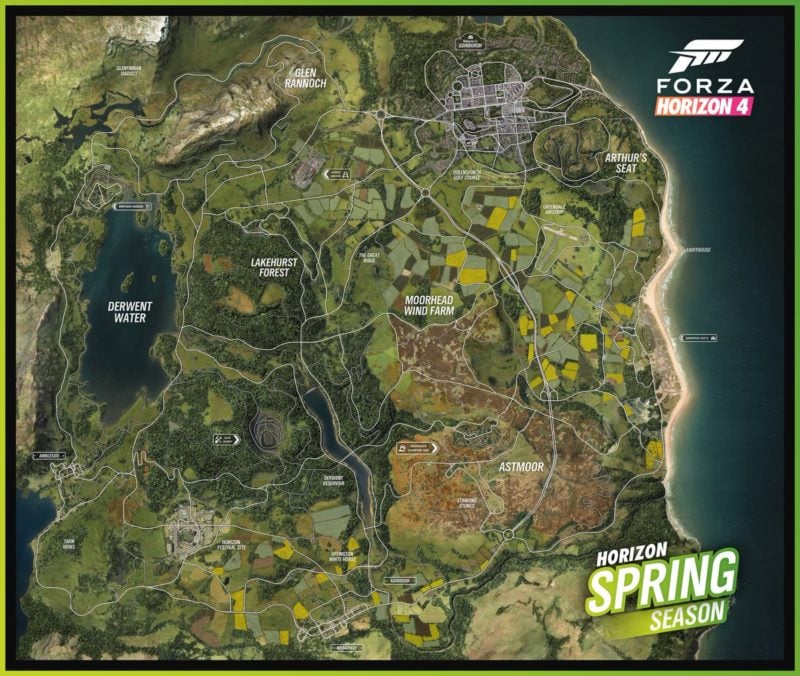 To get inside the city, the team shows off another iconic Scottish landmark, Arthur’s Seat. This 820ft hill is the central point to the city and towers over everything else. Of course being such a high landmass, it’s also the scene for a huge jump with a Danger Sign.

Once on the city streets, the team slides around in a Ford Escort Cosworth.

While it’s not to scale, PG does manage to capture some of the finer points of the downtown area. Between the architecture and the tight streets, it really gives you a sense of actually being there.

During the tour of the city, PG showed off two other features of the game. The first is Edinburgh Castle, which we already knew was part of the landscape. However, the team did reveal you can actually buy it as part of your player-owned houses.

The second is the player-ran businesses in the game. At one point the team passes a building called “World’s Fastest Rentals”. Like the name suggests this is a rental business for high-end supercars.

Once you buy the business it unlocks a Horizon Story which allows you to progress through a storyline of sorts. Upon the completion of the story, your business will then start earning money you can cash in once you boot up the game.

During the tour, the guys at PG did answer a question on many gamers minds: why not London? According to Ralph Fulton, the reasoning behind leaving London out is its size. To make it work the entire team would need to solely focus on modeling the city and nothing else.

Given the number of features we’ve seen so far, we’re pretty thankful it didn’t go that route.

Forza Horizon 4 will release on Xbox One and PC on October 2.

For the full stream, as well as a ton of great gameplay footage, check out the video below.