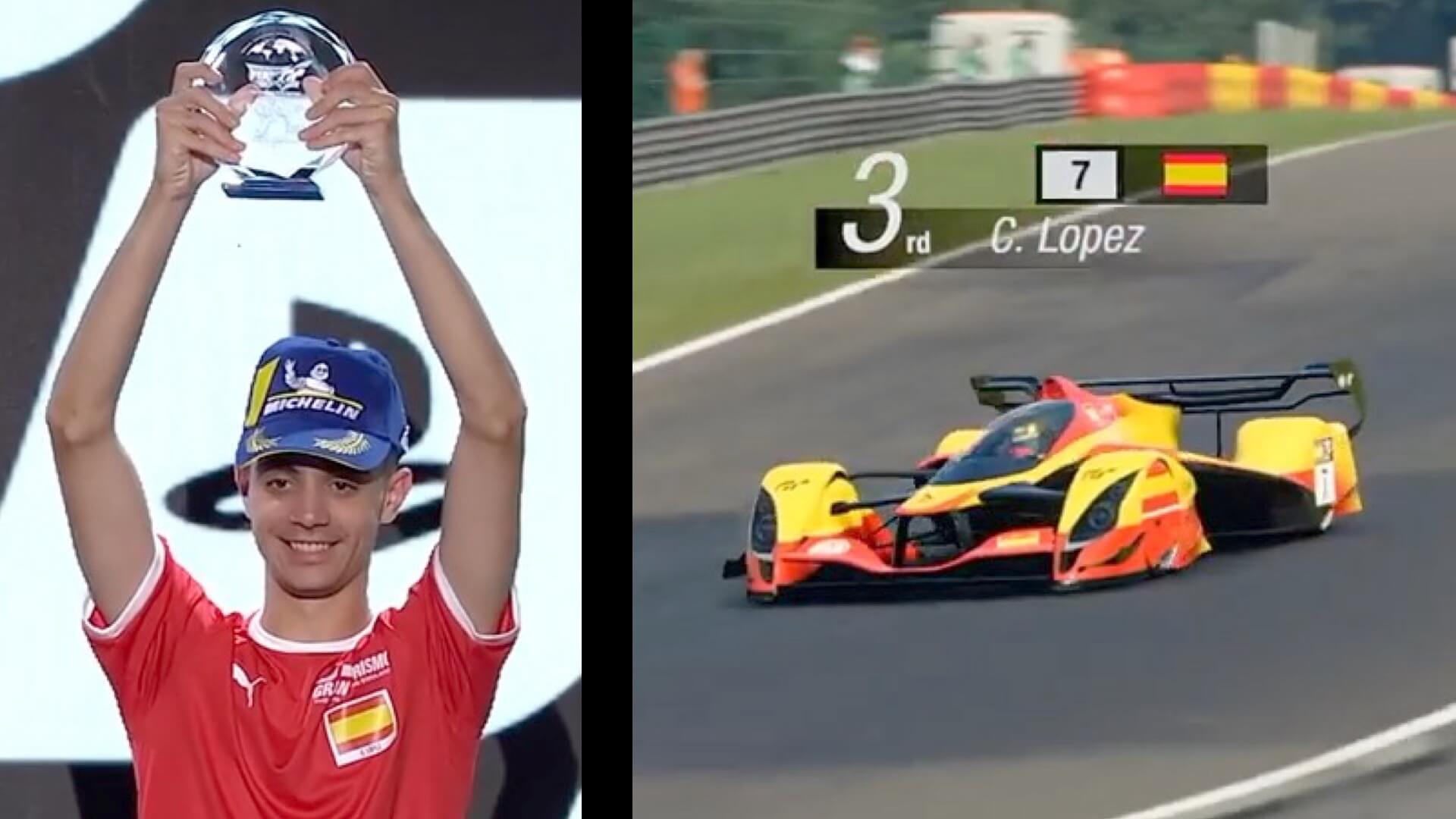 The Fraga/Hizal controversy was the main headline to come out of the Gran Turismo World Tour event in New York, but there were plenty of other great stories, too. The latest chapter in Coque Lopez’s 2019 season is one of them.

At the Nurburgring event in June, Lopez was just a few corners away from victory when he ran out of fuel and was involved in an accident with Cody Latkovski. He was knocked off track – and the podium. It was a disappointing result for a driver that has had more than his share of bad luck in the Gran Turismo Championship.

That luck finally started to change for Lopez in New York, as he found himself on the podium of a Nations Cup event.

“It means a lot,” Lopez told us after the final. “I am so happy because it is my first podium ever. I needed a good result and the Manufacturers Series was not the best for me. If I did a good qualifying on Friday, I could have fought for the victory.”

One of the best stories out of @thegranturismo #FIAGTC event in New York was the steady rise of @Williams_Coque. Here is how he keeps improving: https://t.co/yNMSN18LKu pic.twitter.com/NF6LbRk56b

What does Coque credit for his steady improvement? “In my case, I always felt quite fast in the races, but I was not fast at all in qualifying which made me be so far away to fight for the victory,” Lopez explained. “I have worked a lot since the beginning of the year to improve my qualifying laps. […] I am going to keep training like this.”

Lopez finished 6th in the finals at both Paris and the Nurburgring, so his efforts seem to be working. As we noted in our Nations Cup Driver Rankings published before New York, where Lopez ranked 7th, bad luck has been the only major factor holding him back. Once that clears — and with more qualification practice — he should be in a good position to fight for the World Championship come November.

For now, Lopez is just enjoying the moment. “It’s a podium, and I am so happy because it is my first podium ever. So, let’s train even more and try to improve even more for the next World Tour.”

Lopez will be back in action in just a few short weeks, as the World Tour resumes in Salzburg, Austria, on September 13 and 14.

Andrew Evans · Sep 2, 2019· Comments
Michelin, official Tire Supplier and Technical Partner of Gran Turismo, is staging a special online competition for players in south-east Asia and Oceania, with an all-expenses paid experience at Yas Marina, Abu Dhabi, for the winner.

Andrew Evans · Sep 2, 2019· Comments
A new set of Gran Turismo Sport Daily Races is now available, with the unannounced change to a four-weekly cycle now seemingly the standard from this point forward.

Andrew Evans · Sep 2, 2019· Comments
Following on four weeks from the last set, a new set of Daily Races is now available in Gran Turismo Sport as players get used to the new scheduling for the 2017 title.

Andrew Evans · Sep 2, 2019· Comments
For the first time in nearly a month, there’s a new set of Daily Races in Gran Turismo Sport for players to enjoy for the foreseeable future.

Andrew Evans · Sep 2, 2019· Comments
It’s the inevitable fate of any game that, once it is succeeded, it will eventually wither away as support is withdrawn. While this process usually takes months at a minimum, GT Sport seems as if it could be sidelined in record time.

Andrew Evans · Sep 2, 2019· Comments
Despite being superseded by Gran Turismo 7, GT Sport’s Daily Races seem to be continuing on their weekly cycle — for the time being at least.

Andrew Evans · Sep 2, 2019· Comments
Although Gran Turismo 7 is now out, GT Sport shows no signs of slowing down any time soon, with a new set of Daily Races now available to players.

Andrew Evans · Sep 2, 2019· Comments
Gran Turismo Sport will finally be superceded by Gran Turismo 7 this week, but there’s still plenty to be getting on with in the current title — starting with a new set of Daily Races.