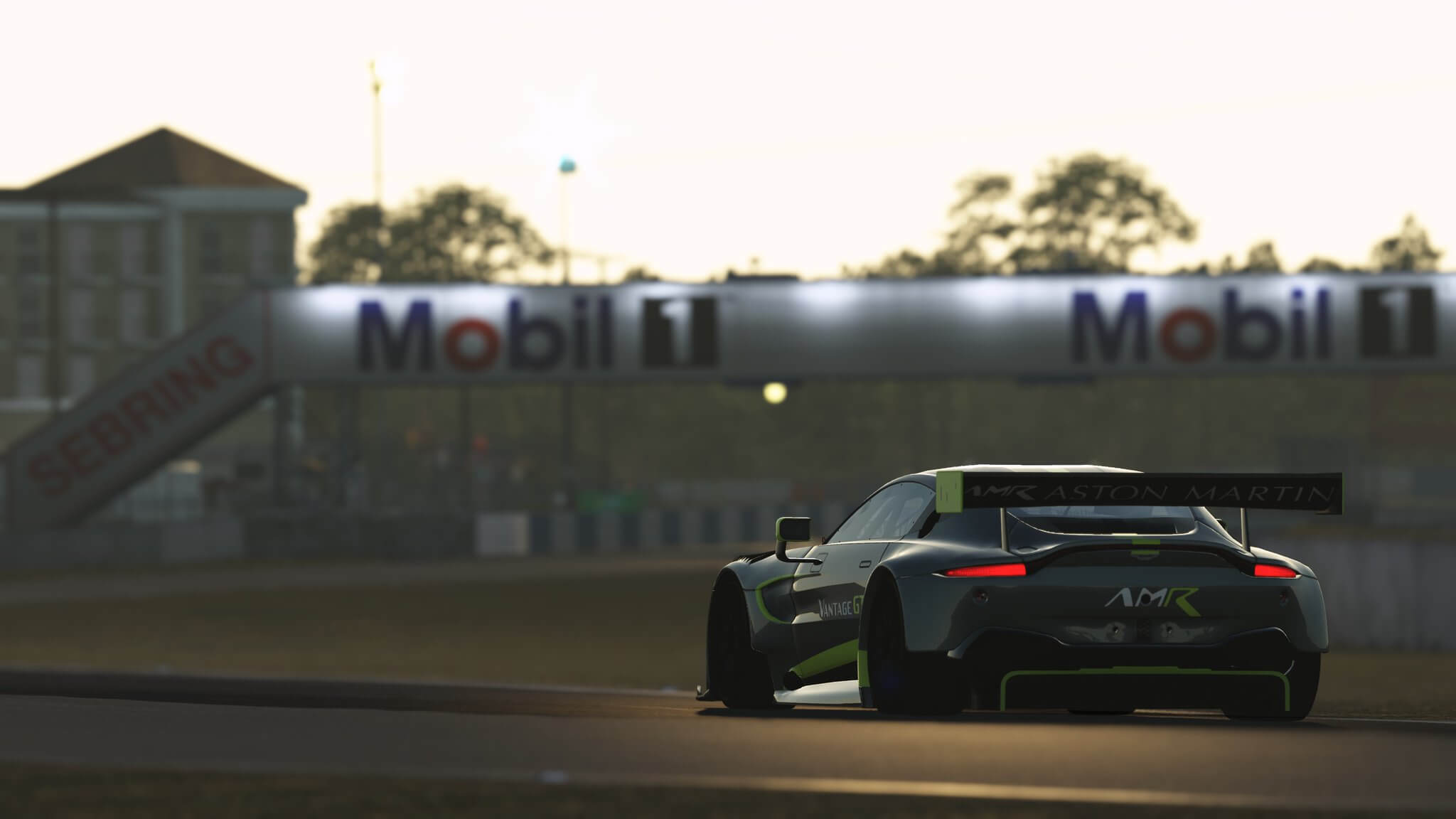 It’s not too often we get the chance to drive a car that is brand new in the PC sims. When Studio 397 asked me if I wanted to do just that, I couldn’t turn it down. The car? The brand spanking new GT3 Aston Martin Vantage.

In truth, I’m really not a GT3 guy, but we so rarely get Aston Martins in our sims that I couldn’t pass up the opportunity to drive one. Indeed, of the sims I drive regularly, only iRacing has one, and that’s a GT1 DBR9 from the mid-2000s.

Perhaps the appearance of such a new car is another sign of the modernization that is happening at Aston Martin. The good news and increasing reach have been continuous in recent history. If it means more Aston race cars in sims, then it can only be a good thing.

In true Aston Martin fashion, the new Vantage is a beautiful machine. Unlike the GTE variant, the GT3 benefits from sporting the more classical dark green paint. Even with the fluorescent flashes, seemingly synonymous with the modernization, it screams Aston Martin.

Beyond the color, this is a completely new car when compared to the old V12 Vantage. The biggest departure is in the engine bay. For the first time since Aston Martin returned to top-level GT racing in 2005, none of its race cars will feature a screaming V12. The replacement? A Mercedes-AMG based twin-turbo V8.

Given my lack of passion for GT3 racing, I pondered how I could spice things up a little, to give myself a touch more fun. 1966 Monaco seemed like the obvious choice! Not only was it a fun selection, but surely it is only fitting to take such a glamorous brand to a glamorous location? (To be honest, I just wanted to see how GT3 carnage would adapt to this usually processional circuit.)

The track is a fantastic throwback. It is faster, with no swimming pool section and a jump at Tabac. Monaco is dangerous enough, but there are huge curbs waiting to launch you over the walls. As if that wasn’t crazy enough, the 1966 track had no barriers at the exit of the harbourside chicane. Apparently, hay bales were seen as adequate protection to prevent you from going for a swim, though I’m sure that Paul Hawkins (the last racer to go for a swim in the harbour) would have disagreed.

As for driving the new Vantage, it’s pretty decent. With it being GT3 spec, it is designed to be among the more comfortable cars in racing, and that is certainly reflected in rFactor 2. In addition modern day GT aerodynamics and suspension, you have ABS and traction control to keep you pointing in a straight line.

The car was a a lot of fun to drive, even though Monaco did its best to make things difficult. The bumps and curbs didn’t really agree with the stiff suspension. Despite the odd sideways moment, the car was perfectly drivable and generally dealt with the rough nature of the circuit very well.

With this being rFactor 2, you get the usual top quality force feedback and tire model. While rF2 lacks in many areas, it is still top dog when it comes to FFB and tyre behaviour. It’s always nice to come back to it and realize just how good it can be.

I may not be fully onboard with GT3, but having this opportunity to drive a modern day Aston Martin in a sim still felt special. The car may not give you the thrill ride of a classic F1 car, but it’s one hell of an endurance car. If you love GT3, you will love this car.

If you want to give this car a go, it’s available as part of the GT3 Challengers DLC on Steam.