EMERGENCY UPDATE NOW LIVE, PD call it 1.07 but it is NOT the GT League

While waiting for the Mileage Exchange to update I happened to see this pop up, Thought it best to share here. 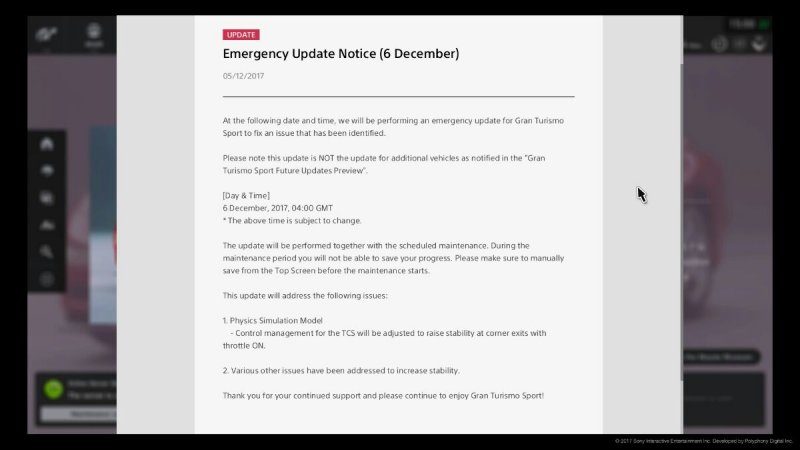 Good to see them responding to issues like this

When is the mileage exchange supposed to update?

What's up with the traction control? Seems to work perfectly well when set at 2 to me.

They increase stability even more?

So basically we will play Train Driving Simulator soon.

GTWelsh
Good to see them responding to issues like this

Indeed I've never known PD to communicate quite so much

Tou2istTrophy
When is the mileage exchange supposed to update?
Click to expand...

Should have been as of typing 15minutes ago, 9am GMT.

Stotty
What's up with the traction control? Seems to work perfectly well when set at 2 to me.

I don't think they mean the TCS, as this works fine. But if you activate TKS (I think thats how its called. the one that helps you not to spin) your corner exit speed was horrible after the patch. So this is a good change for people who drive with a controller.
Especially for me, as mine is broken and I have to use X and square right now. That makes exiting corners nearly impossible without TKS on

Stotty
What's up with the traction control? Seems to work perfectly well when set at 2 to me.

Some GT3 in game right now with locked LSD are just undrivable, I tried Lexus last week its rear wheels keep spinning till 4th gear if you don’t use TC but if you use it after 1.06 you lose acceleration out of corners. I’m guessing it’s not the only car that is hard to drive right now.

Maybe this will even the playing field a bit, Going off the wording I take it to mean anything that isn't FF will be easier to drive without the TC being either too overpowered (Making you crawl along at a snails pace) or completely useless (Letting the car spin too easily) I hope this is the case.

Would have been nice if PD had put when the update is planned for so we aren't having to guess.

Nothing wrong with the amount of grip on RWD cars... just FWD that have too much.

I am past caring what PD do to make this game easier for the masses, I guess I will start creating lobbies with GR3 cars and comfort tires.
D

I know what they are referring to - on 1.06 when I applied throttle in my Mustang or Z4 it would spin very easily on exiting almost any slower corner. I put TCS on to help, and it didn't.

Maybe they meant they messed up the TCS changes that increased grip and will now fix it?

An update for a stability increase - this is a Playstation game after all. 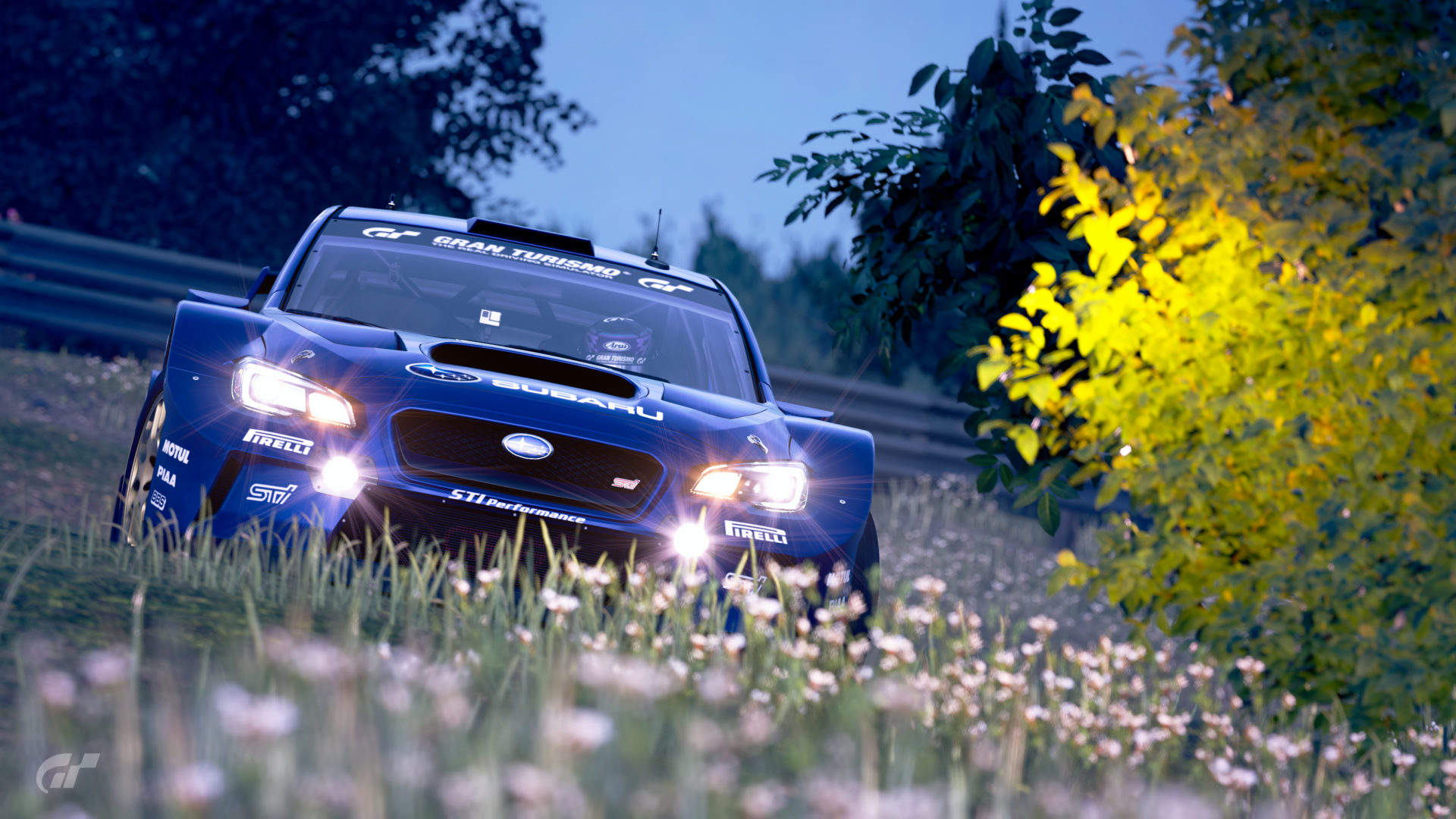 This article was published by Andrew Evans (@Famine) on December 5th, 2017 in the Gran Turismo Sport category.

I didn't, I stopped going near the GT forums years ago. You can only have so many hernias before the novelty wears off, after all.
C

Does this mean that TCS will actually behave like TCS now? Controlling the power delivery in reaction to loss or traction and not the slip angle like it currently does? It currently applies only braking force, that's not how TCS is supposed to work.

Here's what I'm on about for those who don't know:

CConspicuous
The TCS is still very buggy and potentially game-breaking with some cars, it's getting beyond annoying and it seems to have spread to some of the Gr.3 cars from the Gr.1 cars since v1.06.

Seriously? Did Polyphony outsource the TCS coding/engine to Peter Molyneux or Yogventures? The way the TCS kicks in and behaves it totally wrong.

Sometimes you will get a clean exit from a turn with satisfyingly perfect traction and the TCS will suddenly decide to kick in, violently borking the car sideways off towards the inside wall because it's application has caused the car to lose all the traction that the TCS supposed to be ensuring!

It does this on totally randomly occasions over apexes, bumps, on the exits of tight corners, on the exits of medium corners, in the middle of corners, on gearshifts, if you're unlucky it will start eating away at your speed during flatout turns and sometimes it just leaves you awkwardly having to coast the car around bends simply because you just don't trust it to not completely screw up your throttle application, it's ridiculous.

Another side effect of TCS I've noticed is that it sometimes will kick in when there's absolutely no wheelspin during a corner or on turn-in, causing the car to refuse to 'bite' and start to understeer wildly, do the following and you'll see what I mean:

Go to the Nordschliefe in the M6 GT3 car (it happens with quite a few cars but this is my given example) and take Hatzenbach as you normally would (usually with either a lift off the throttle or a dab of the break) five times, start of with TCS on 0 and go up a level each time, you'll notice how each time it will pick up hints of understeer that didn't exist before.

Why is this happening? Well the TCS appears to be coded to prevent the slip-angle of the car's tyres, which is essentially how tyres generate their grip through turns, for example; and F1 car would require a 4-6 degree slip angle to generate their grip. This is the only logical explanation I can think of as to why that understeer specifically occurs and ties on to what I suspect is wrong with the TCS in GT Sport:

It's not coded react to the wheelspin or loss of traction and to then apply the usual combination of measures to limit that loss of traction which are;
it's reacting to the car in general slipping in any way (including slip-angle) then simulating TCS by applying only a harsh braking force in the most stability jarring way possible, none of the other measures.

Also, because I know people will inevitably ask what's my background to speak on TCS: I've been a motorsport journalist and photographer since 2009, I've also raced occasionally in club races and got to dick about in GT4 and GT3 cars occasionally at tests / experience events, so I know how TCS is supposed to behave and in racecars it's usually never involving brakes, either that or it's very subtle to the point you do not notice. TCS in real-life works in a way which doesn't rob the car of it's slip-angle.

Unfortunately GT Sport's TCS seems to work in a way which does rob the car of it's slip-angle...
Click to expand...

They've really gotta do something about the overpowered Meganes in Gr.4.

Stotty
Nothing wrong with the amount of grip on RWD cars... just FWD that have too much.
Click to expand...

I will say that one of the corvettes was very tail happy on exit, even with TC at 3. I drove the vettes quite a bit prior to 1.06, I wasn't comfortable after tho.

Yep, Thanks for not giving me the credit at all, I only took the time to make a thread initially and contact the site with the information literally hours before this was posted, I won't bother next time 👍

Guys, it's explicitly saying it's just to address the TCS, stop hoping for the BOP.

Theoretically it may well balance things in respect to BoP though, However you are very much correct 👍
T

It says "other issues" though.. so might be something else.

I'm actually surprised that PD are so quick this time around. I thought that I was going to have to deal with the NSX Gr.3 being so squirrelly out of turns forever.
J

You can't take hope away from us. Never!

insted of fixing tcs they should fix penalties and sr in sport mode, last night i went fom a b /s to c/b all because other players in the room played like it was a world war 3, i keep geting hit all the time

, and no one was geting any penaites

Is 1.60 the final update for GT Sport? Because damage is looking a whole lot better.

D
The state of multiplayer lobbies in Gran Turismo 7