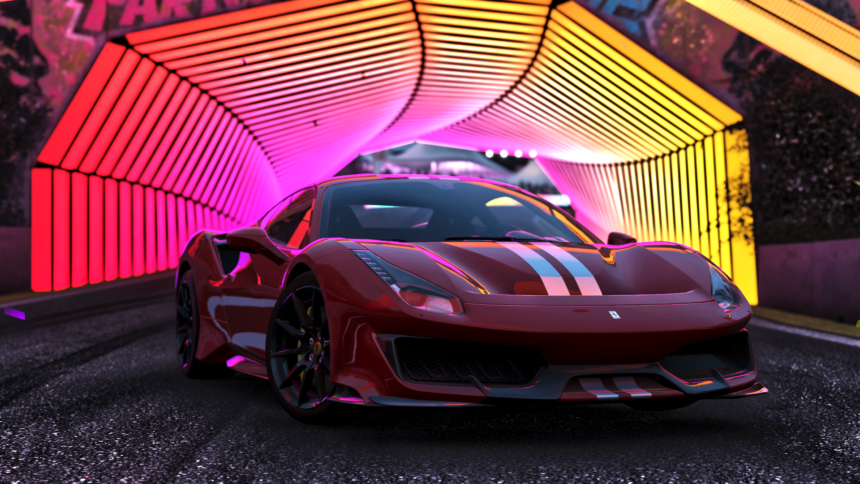 The warmth of Autumn has settled over the UK this week as a fresh season begins in Forza Horizon 4. This seasonal switch brings a new serving of content and events for players to try out.

A new Playlist is on the cards this week, with refreshed prizes available for 50% and 80% completion. There’s no content debuts this week, but players will get another chance to get a thoroughbred Italian supercar.

Read on further to see what Autumn has in store. 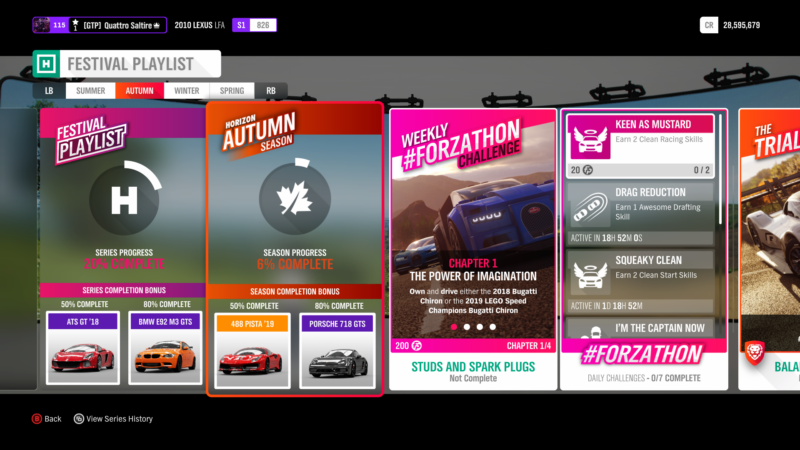 As part of a week of returning content, the headline act is the 2019 Ferrari 488 Pista.

This track-bred version of Maranello’s core ‘berlinetta’ (that’s ‘coupe’) is the most hardcore version yet. A crash diet has seen weight drop by nearly 200lb, along with a power boost for the 3.9-liter, twin-turbocharged V8. The Pista makes 711hp, a 50hp hike over the original 488.

Joining it is the 2018 Porsche 718 Cayman GTS. Often seen as a sweet spot in the range, the Cayman GTS offers performance for those who don’t want the levels of the GT4. The GTS features Porsche’s controversial 2.5-liter turbocharged flat-four, making 361hp. For all-round performance, the GTS may be all the sports car you’ll ever need.

Probably the main event this week though is the Volkswagen ID R. Wolfsburg’s record-breaking electric prototype is one of the most exciting racing cars of the 2010s. Powered by two electric motors, the ID R puts out 670hp to all four wheels. The extreme Pikes Peak aerodynamic package ensures enough downforce to fly through corners.

You can win the ID R from this week’s Time Trial event “Balance of Power”.

There’s also a returning Showcase Remix event on the cards. “Pillar of Autumn” will see players suit up as the iconic Master Chief and going against a Halo dropship in the Warthog. 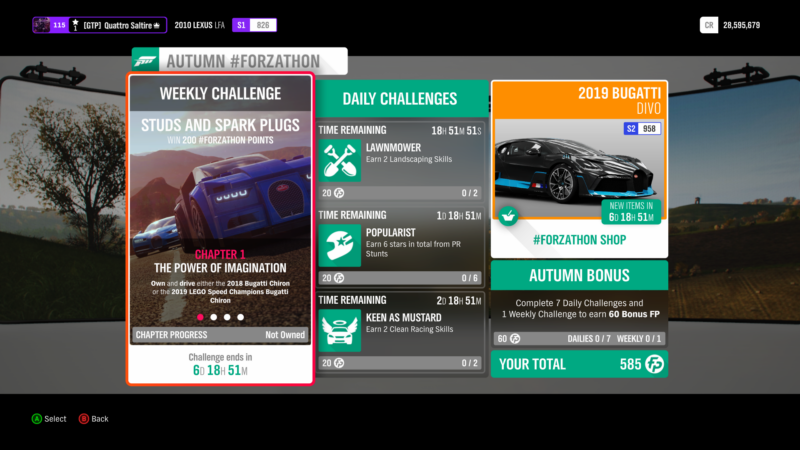 This week’s Forzathon is a fast one, with the Spotlight shining on one of the fastest cars ever made: the Bugatti Chiron. If you have the Lego Speed Champions expansion, you also have the option to choose the Lego version of the Chiron. Pick one of these French missiles to get things rolling.

Next up, unleash the full potential of the Chiron and take it to its maximum speed of 261mph. You’re going to need a lot of straight road for this one. Following that, take our Chiron to the Strathbridge Speed Zone, where you’ll need to earn 3 stars to progress.

To finish this week off, prove that the Chiron is the ultimate street car by winning four Road Racing Series events. 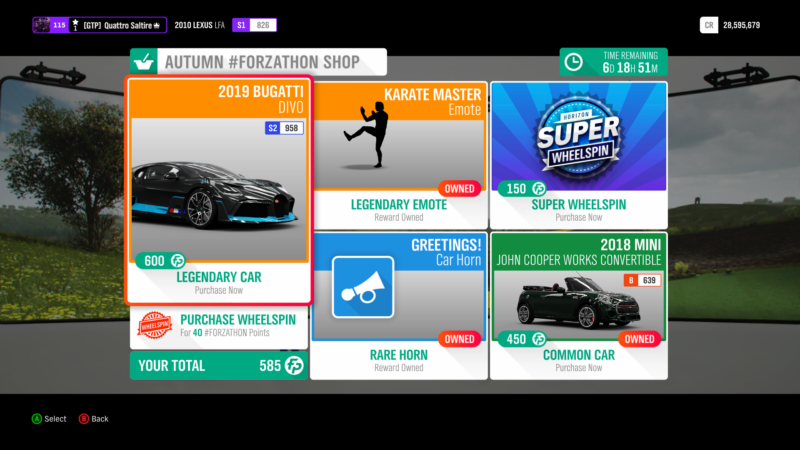 The shop lineup this week continues the Bugatti theme, with the 2019 Bugatti Divo as the star attraction.

Based on the Chiron, the Divo features a much more extreme body that pays tribute to Bugatti’s coachbuilding heritage. As a result, the Divo produces more downforce than a standard Chiron, allowing for much improved handling at the expense of outright speed. It also retains the Chiron’s 8.0-liter W16 with 1,479hp.

The Divo will set you back a hefty 600 Forzathon Points. If you missed its first appearance in Series 15, now is the chance to grab one.

If you’re after something less manic, then the Mini Cooper S John Cooper Works Convertible may be for you. The JCW offers up plenty of hot hatch performance but it now offers wind in the hair thrills too. The 1.6-liter turbocharged engine puts out a healthy 228hp, which will be more than enough for some.

At 450 FP, the Mini will take a sizable chunk out of your wallet, so you’re really going to have to want a convertible hot hatch for the Mini to fit the bill

Novelty items available for purchase include the Karate Master emote and the Greetings horn.