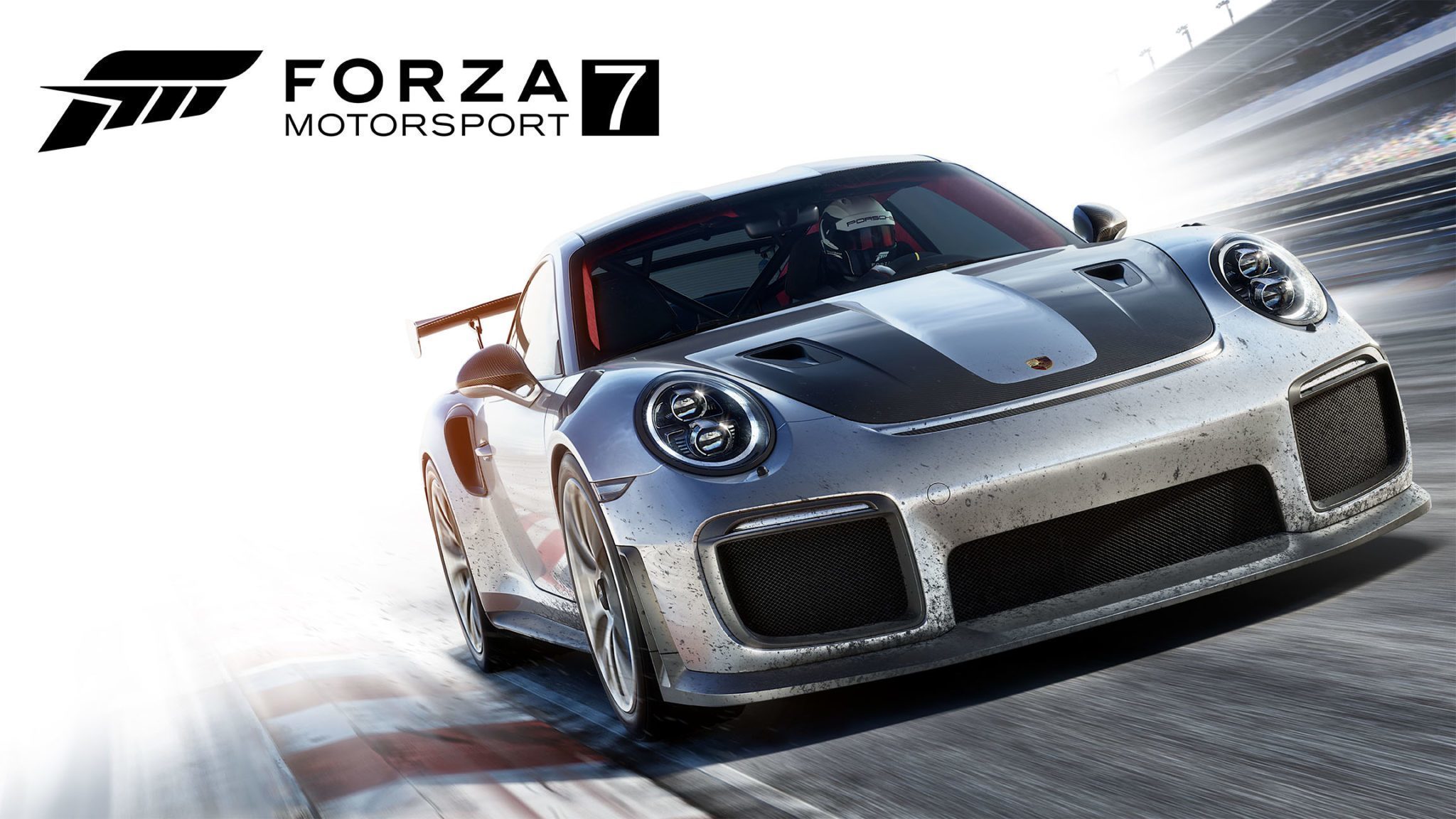 Continuing with our hands-on time with some of the racing games from E3 2017, we’re now exploring Forza Motorsport 7.

Microsoft pulled the wraps off the game at its pre-show media event Sunday, alongside the new Xbox One X. Our time to try it was limited during the actual Expo days, however. Blame it on 2017 being the busiest year for the genre since basically… ever!

We’ll admit it right from the start: we were not immediately impressed with FM7’s E3 trailer. In terms of lighting and overall aesthetic, it looked much like Forza 6, carrying on the series’ aesthetic tradition. Not that Turn 10’s 2015 racer looks bad — we just didn’t see a massive step-change.

As you’d expect, seeing things up close and personal on the show floor offered a different experience. The game was running on the X, attached to a 4K TV. It looked incredible. “The textures are beautifully detailed,” Jordan recollects, “and the wet asphalt of the Nürburgring GP track was probably one of the most convincing and beautiful track surfaces I have ever seen in a racing game.”

Once home, I loaded up FM6 and FH3. The best way to describe the look of the latest Forza is as a mixture of those. It featured FM6’s more subdued color palette, but with the impressive lighting engine of Horizon. Seeing it running at 60fps was a treat, as only PC FH3 players have been able to witness dynamic time/weather at that framerate.

In terms of outright graphic realism, FM7 doesn’t quite match Gran Turismo Sport. The lighting felt lacking in terms of subtlety. That said, we’re talking very small differences here between the two — and Project CARS 2, for that matter. The competition has closed the gap considerably compared to, say, 2009. 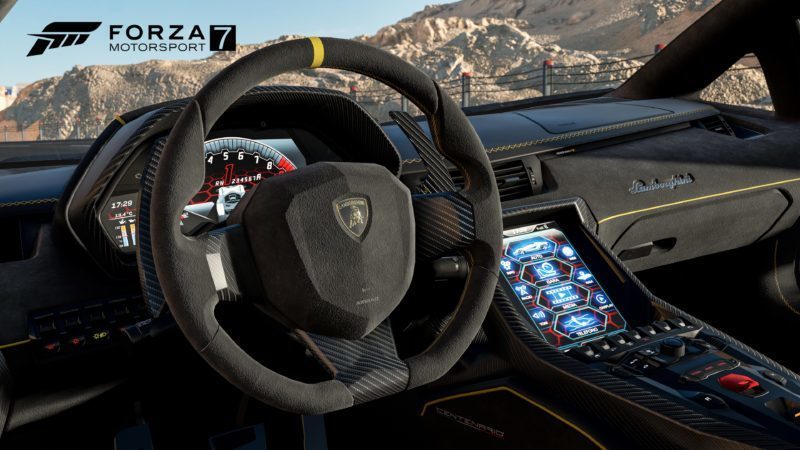 Full disclosure: Jordan and I both only got our hands on the game with the default pad. Due to a scheduling mix-up and the reality of LA traffic, we never did get time with the wheel.

Nonetheless, both of us made the most of the time we had with the game. Forza has long had a reputation as one of the better-optimized controller experiences in the genre. That looks set to continue — here are Jordan’s thoughts:

“As someone who almost exclusively plays games with a wheel, I was really impressed with the feel of FM7 using the controller. After the first lap, I started to get comfortable with it, and the car felt alive in my hands. One week later, what sticks with me the most is Forza 7‘s implementation of vibration with the Xbox controller. It did a better job of communicating what the car was doing than any other racing game I’ve played with a pad.”

In terms of physics, the game felt largely similar to FM6. John Sabol of InsideSimRacing shared a similar sentiment in his own video, and we talked about that during the show. The 911 GT2 RS that debuted on stage alongside the game was very planted, even understeering at certain parts of the new Dubai track. This may not be a bad thing: 911s do carry a lot of weight directly over those rear wheels, after all. Of course, turning off all aids and getting generous with the throttle at low speeds would rotate the car — it is a 600+ horsepower vehicle.

One criticism often levelled at FM6 is that some cars tend to be more prone to oversteer than seems likely. We’re hoping the 911’s behavior is a sign of improvements in that regard, but only more seat time will answer that.

The massive Mercedes racing truck was a riot on Mugello. It’s all about grip, making it hard to tell any differences from its FM6 iteration. The brakes were also incredibly powerful, so races should be very close. We just feel bad for any casual players that try to use it from chase cam. 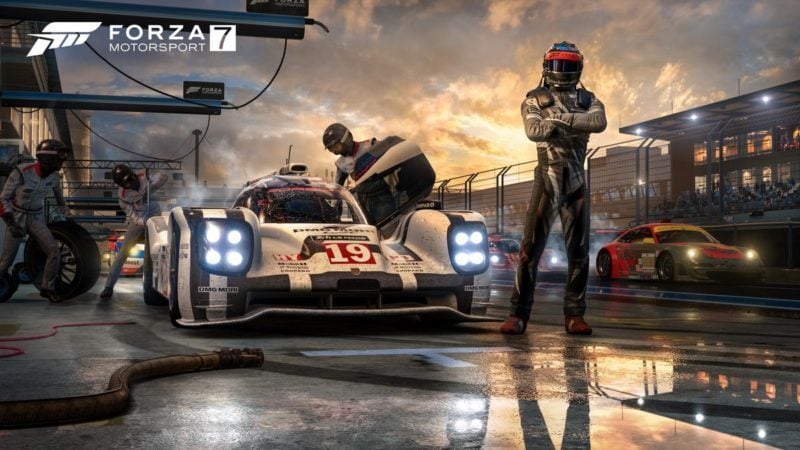 User Interface, On and Off the Track

We were very impressed with the game’s overall presentation — it’s incredibly “slick” and highly polished. Since the Xbox One generation kicked off in 2013, Forza games have all followed the same basic formula for the user interface: tiles. Lots of tiles. While effective, it wasn’t exactly overflowing with charm.

The new menus, at least in the E3 demo, change that. Turn 10 has put drivers in the spotlight in FM7, with over 300 suits for players to choose from. To accommodate this new focus, the game drops players into actual spaces, showcasing the drivers and cars. There are still tiles — in the deeper menus, and the interactive loading screen — but it’s a welcome change.

The menus are stylish, endowing the game with its own personality, distinct from the more conservative, elegant menus of Gran Turismo Sport, or the more technical, utilitarian presentation of Project CARS 2.

The HUD during racing is quite minimal, revisiting the angled look of FM5. It’s refreshingly simple and easy to understand, but we wouldn’t mind some additional info in terms of gaps between other cars and the race leader. Some aspects of the esport-focused spectator update in FM6 would not go amiss. 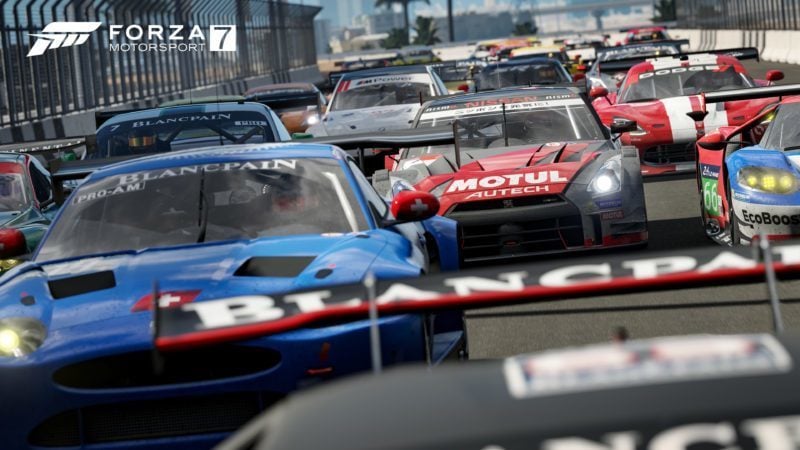 We came away largely impressed with Forza Motorsport 7. There were a few niggles, and we still want to get some time in with a wheel. But as the only “car encyclopedia”-style game set for release in 2017, we think Turn 10 has found its place in the market.

One other aspect that we’re hoping receives attention: the AI. Spatial recognition was poor, as the computer-controlled cars side-swiped us on numerous occasions. However, with Forza’s Drivatar system — which learns players’ habits and applies it to AI versions against others — that hopefully will improve as more people play.

Creative director Bill Giese confirmed the team will show off more of Forza Motorsport 7 at Gamescom this August. We look forward to the German event: if anything, it could be even bigger for the genre than E3 2017 was!