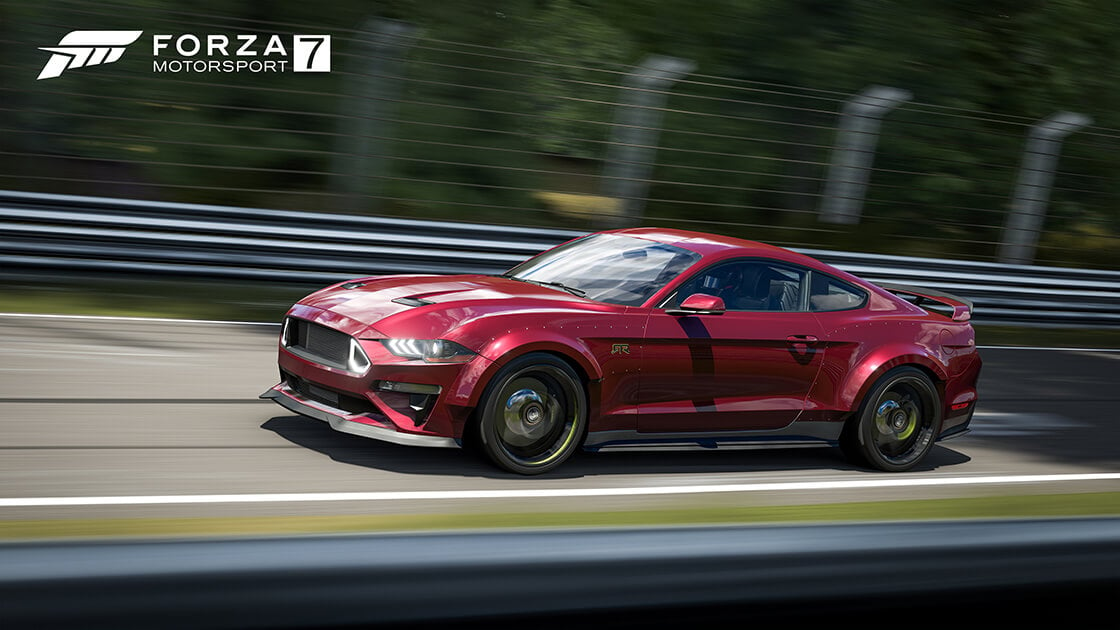 The latest version of Forza Motorsport 7 is live for players on all platforms. Turn 10’s sim racer gets a smaller update this month, but it has bigger implications for the future.

We already got a taste of what to expect last Friday with a breakdown in Forza Monthly. New cars, updates for wheel users, and the much-anticipated launch of Forza Race Regulations (FRR) are the main points for March. 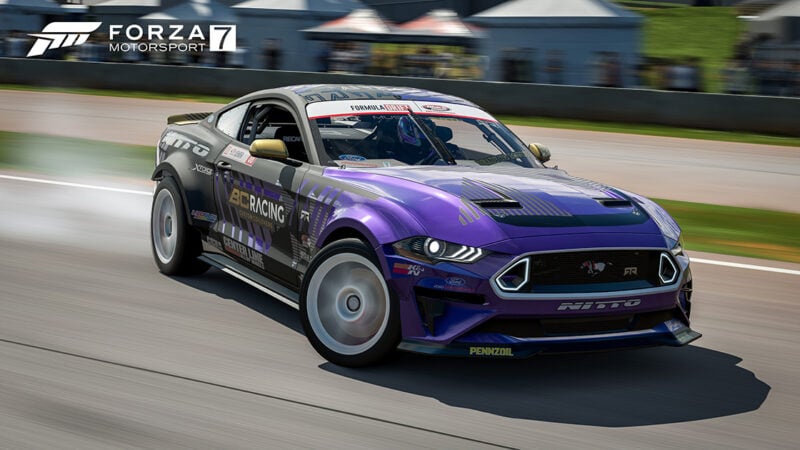 Vaughn Gittin Jr’s RTR brand — literally, “Ready To Rock” — gets the spotlight treatment this month. It isn’t a single car, or even two: March gets a trio of Ford’s evergreen pony car.

The first and most sedate of the lineup is the road-going Spec 5. It’s a comparative sort of sedate, as the Mustang GT it’s based off still pumps out 460hp from its 5.0-liter V8. The Spec 5 gets a whole suite of RTR body addenda, with aggressive fender flares, new hood vents, and those signature in-grille lights.

Despite sharing the same basic platform Gitten Jr’s own Mustang is a very different proposition. Still naturally-aspirated, the Roush-Yates V8 is a monster, revving to 9,000rpm and producing 1,000hp. His no. 25 drift car is joined by teammate Chelsea DeNofa’s mechanically similar, indigo-tinged Mustang. 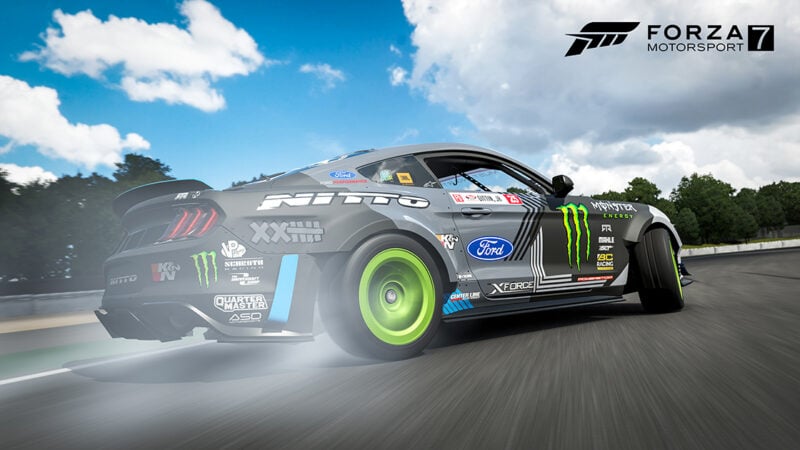 Finally, FM7 gets an in-race penalty system. This month’s initial FRR offering is a soft launch, open to a select number of invited players ahead of next month’s public hopper.

The first FRR month will be focused on track cutting and the associated penalties. Players will get a run-down of how the system works when joining the hopper itself. Simplified, an algorithm will add on time to a player’s race total if the system has determined the player went off-track for an advantage. 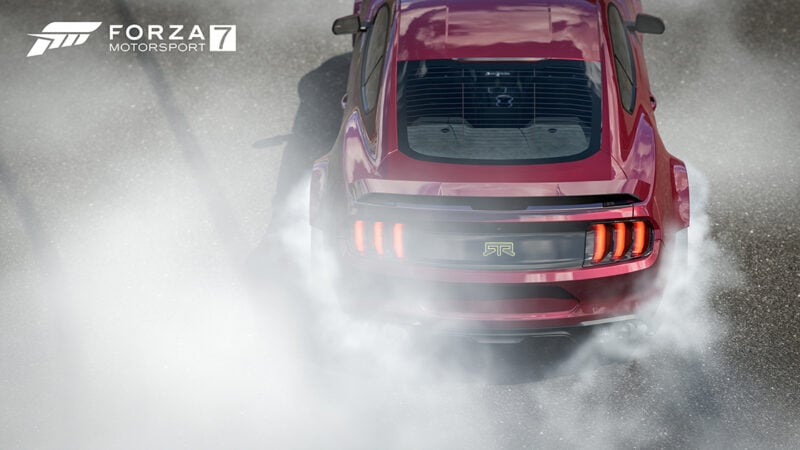 Nevermind the drift cars or the closed beta: for wheel users the March Update brings plenty of welcome updates.

At the top of the list is the option of per-car force feedback and steering rotation settings. Players can adjust both on any car in their garage, and the game will then save them for all future use.

There’s also now a wheel telemetry page. This allows players to diagnose their wheel settings while in-game, to minimize issues like FFB clipping.

Two other FFB settings have joined the lineup too. They’re more technical in nature, so we’ve provided Turn 10’s descriptions for both:

Other improvements landing in FM7 this month include an adjustable drift cockpit camera and various bug fixes. For the full patch notes, click here.

Andrew Evans · Mar 12, 2019· 8 Comments
Microsoft and Special Olympics are once again partnering on a gaming event for athletes involved in the disability sporting movement, and Forza Motorsport 7 will form part of the program.

Andrew Evans · Mar 12, 2019· 7 Comments
Forza Motorsport 7 will shortly be no more, as Microsoft moves the game into end of life status this September.

Michael Leary · Mar 12, 2019· Comments
The Xbox Game Pass subscription service continues to grow, and next month sees the addition of a fan favorite. With DiRT Rally 2.0 leaving the service on October 1, it begs the question: what’s going to take its place for sim racers? Now there’s an answer, Forza Motorsport 7.

Gary Slater · Mar 12, 2019· Comments
Fans of the Forza series who spend time creating their perfect liveries have a good reason to show them off to the world once more. Following an absence of almost a year, Turn 10 has announced that the official livery contests will return.

Gary Slater · Mar 12, 2019· Comments
The potential for virtual racing esports to feature in marquee sporting celebrations is something that has been the subject of substantial attention in recent years. It’s a subject that the International Olympic Committee has discussed, and Japan’s National Sporting Festival now includes Gran Turismo Sport as one of its events annually.

Kyle Patrick · Mar 12, 2019· Comments
On its latest episode of Forza Monthly, Turn 10 officially revealed all the details for the fourth season of the Forza Racing Championship.

Kyle Patrick · Mar 12, 2019
Turn 10 has released the latest — and final — update for Forza Motorsport 7. Weighing in at 570MB, it introduces another free Porsche, updates to the Forza Race Regulations system, and more.

Michael Leary · Mar 12, 2019· Comments
The next Forza Monthly live stream is near, and it looks like an interesting one. As you can see in the image above, the car being showcased is none other than the Porsche 718 Cayman GT4 Clubsport. Going by past events, this suggests the GT4 racer is on its way to the game very soon.

Kyle Patrick · Mar 12, 2019· Comments
A designer from Turn 10 has revealed a variety of cars from Forza Motorsport 7. The catch? We’ve never seen them in the game, nor Forza Horizon 4, at least not yet.