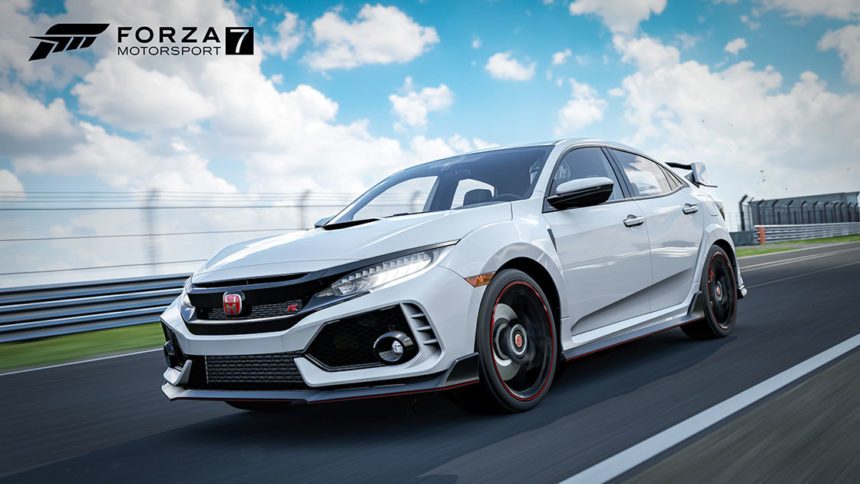 A new game update for Forza Motorsport 7 is now available to players worldwide. Announced on the official site, Turn 10 is making May all about Honda, by first treating players to a new free car.

The car in question is the new 2018 Civic Type R. This super hatch is equal parts ludicrous and fast, making it a serious contender in the Modern Hot Hatch category. We’ve gone into further detail on the Type R below.

The Civic is available now for free to all players. Those who own the FM7 Car Pass will have the car automatically downloaded to the in-game garage. Players who don’t own the car pass will have to purchase the car in-game manually, but will be available for no extra charge.

We actually had a hint the car was coming months ago. Back in February Turn 10 pit Graham Rahal against Peter “SLAPTrain” Jeakins in a virtual versus real showdown with the CTR. Now to see if we can beat those lap times…

The latest FK8 generation Civic Type R is one of the hottest hatchbacks on the market. The ludicrous styling aids in aerodynamics, helping to keep the car planted to the road.

Its 2.0-liter turbocharged engine develops 316hp exclusively to the front wheels. Intense chassis development means that the Type R is the fastest front-wheel-drive production car to ever lap the infamous Nürburgring Nordschleife.

With this much power and pace, the new Civic Type R should prove a serious challenge to the rest of the hot hatch establishment.

Forza Horizon 4 12 Sep 29 by Michael Leary
It’s full speed ahead as the Xbox Series X launches on Tuesday, November 10. If you were unable to secure your own during initial pre-orders, there’s still a chance yet…

Forza Horizon 4 5 Sep 24 by Gary Slater
Summer has reared its head once more to kick off a new season in Forza Horizon 4. We also fly the green flag to begin Series 27 and the second…