After weeks of teasing, Turn 10 has unveiled its bid for the burgeoning eSports segment. Dubbed the Forza Racing Championship, the ESL-hosted event will be open to all Forza Motorsport 6 players, with numerous prizes up for grabs. At the top of the pile is a brand new 2017 Focus RS, provided by the first season’s title sponsor.

There are two Series that make up the first season: the Elite, and the Open. Both will require players to sign up to the ForzaRC ESL page (click here) if they’re hoping to grab any of the more exclusive prizes, like the afore-mentioned Focus, or Xbox consoles, Elite controllers, Logitech wheels, and FM6 DLC codes. However, there will be prizes for all players that take part: in-game cars the fans have been curious about for some time…

The Elite series will utilize the game’s Rivals mode, with a new Qualifier posted each Monday starting August 8. Players will then have three days to set their top times, with the top 128 seeding the ESL-hosted qualifier held on the following Saturday. From that event, the top 16 players will race against each other on Sunday in a Showdown for four spots to the season finale, to be broadcast on Forza’s Twitch channel.

Each week, the four Showdown finalists will also be eligible to win the newly-released Xbox One S console, Xbox Elite Controllers, and wheels from Logitech.

At the conclusion of Week 3, the 12 finalists will race against one another for the chance to add the Focus RS to their real-life garage. This final race is also scheduled to be broadcast on the official Twitch channel, on September 4.

The Leagues mode of FM6 will host the Open Series, grouping players with similarly-skilled competitors as the vie for the prizes. It too will kick off this coming Monday. Each week will run the same cars as the Elite Series (Mustang GT, Formula Ford, and GT Le Mans), on a rotation of tracks. Prizes will arrive in the form of DLC for the game, covering anything from the Porsche or NASCAR expansions to the FM6 Car Pass.

Unlike the Elite Series, Turn 10 have not put a number on how many players will be eligible for these prizes each week, but they too will require players to register at ESL to be eligible. 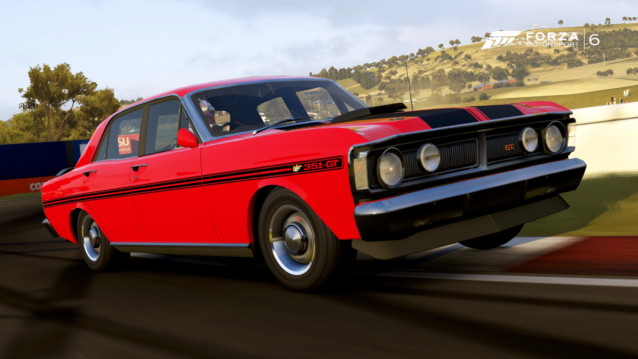 Free Prizes For Everyone

In addition to the prizes listed above, all players that participate in any of the events, regardless of placement, will receive special prizes. For the League events, setting a time on any of the three weeks will result in a 1971 Ford Falcon XY GTHO Phase III in-game, with a special livery relating to the event itself. Now we know why Turn 10 snuck it in last month.

For Rivals players, every participant will win a similarly-rare 1973 Ford Escort 1600. It too will be painted in a unique livery each week. As another car that was hidden in an update some months ago, fans should be happy to finally get an answer on how to (easily) access it.

To celebrate the season before the August 8 kick-off, Turn 10 has opened special Hoppers and Rivals events in Forza Motorsport 6 for players to get to grips with the upcoming combos. It has also announced special livery and photo contests will be taking part on the official forums.

Andrew Evans · Aug 4, 2016· Comments
The United Kingdom’s James Baldwin has taken the gold medal in the esports discipline at the FIA Motorsport Games, to give the country its first ever category gold.

Andrew Evans · Aug 4, 2016· Comments
The FIA Motorsport Games will crown its esports champion today, with the semi-finals and final taking place live from the Mistral Hall at Circuit Paul Ricard.

Andrew Evans · Aug 4, 2016· Comments
The world’s best virtual racers will be gunning for the medals in the FIA Motorsport Games Esports event over the next two days, starting with the quarter-finals on Friday October 28.

Andrew Evans · Aug 4, 2016· Comments
After six months of racing, the final six competitors in the 2022 Ferrari Velas Esports Series have gathered in Maranello for the Grand Final, which will broadcast on Sunday October 2.

Andrew Evans · Aug 4, 2016· Comments
The 2022 Ferrari Velas Esports Championship is now down to its final six drivers after two evenings of racing in the Regional Finals.

Andrew Evans · Aug 4, 2016· Comments
Half of the names heading to the 2022 Ferrari Velas Esports Championship Grand Final are now locked in, and today’s North American Regional Final is set to decide the remaining racers.