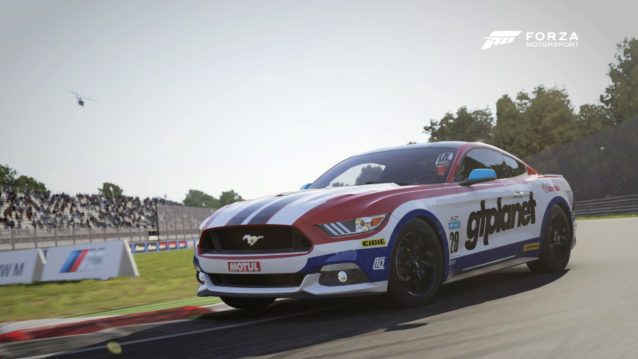 The Forza Racing Championship kicked off earlier this week with the 2015 Mustang GT as the first featured car. In the Elite Series, players were challenged to take their pony car around the turns of Monza in a dedicated Rivals event.

A recent game update coinciding with the event launch had made changes to various tracks to limit corner cutting and track extending. With a 2016 Ford Focus RS set as the grand prize however, it didn’t take long for the quicker players in the game to find (and exploit) a glitch at the Italian circuit.

Normally, when a player goes off-track in the game, a warning symbol appears beside their lap-time, signifying it as dirty. At Monza, the first and second chicane, as well as the Variante Ascari complex, can be cut significantly without dirtying the lap.

Through some testing of our own, it appears that the key is in how the player negotiates the speedbumps that line the inner edges of these curves. Utilizing this exploit is good for well over 1.5 seconds per lap.

Turn 10 is aware of the situation, and while not much can be done for the current event, community manager Brian Ekberg announced the ESL-run events this weekend will move to another track:

“While our goal was to bring this track back into competitive use with our recent content update, clearly there is more work to be done. With that in mind, I’d like to apologize for any frustration this has caused.

To be clear, we will be using the track limits as defined in Forza Motorsport 6 for our qualifying Rivals events. However, for this weekend’s Week 1 Cup and Showdown events with ESL, we will be running a different track – the Nürburgring GP.”

This isn’t the first time we’ve seen a situation like this happen. Way back in 2011, GT Academy was hit with a similar controversy when Sony had to cancel Round 2 after what it deemed ‘inappropriate behaviour’. When big prizes are on the line, like a new hot hatch or a seat with a racing team, any advantage will be explored.

You can read more on the first season of the ForzaRC here, including the schedule. If you haven’t set a time in the first Elite Series event (to secure yourself a 1973 Ford Escort RS1600), you’ll want to hurry: it closes at the end of today.