The first World Series event in the new-format competition saw the finalists run through a quick-fire hot lap qualification session for each of the two races. There’d be a single race in each of the Manufacturer Series and Nations Cup to determine where the first official points of the 2021 season would go.

The manufacturers were up first, with 12 drivers — consisting of 11 still representing their marques from the 2020 World Final and the substitute driver Alexandre Le for Citroen — heading out on their qualifying session.

First blood went to 2018 Asia-Pacific champion and 2019 World Tour Tokyo winner Ryota Kokubun, representing Mazda, who put the RX-Vision GT3 Concept onto pole position with a 1:56.397 lap, under a tenth of a second ahead of Gallo’s Honda NSX and Inostroza’s 911 just 0.002s further back.

The early exchanges saw the race go in favor of the cars starting on the softer tire. Gallo got past Kokubun at the front — though Kokubun didn’t make it too hard — while Manuel Troncoso and Vinicius Neto joined them in the front four on the soft-shod Lamborghini and Audi machines.

However disaster struck for the Italian Olympic qualifier through an unforced error. Taking a little too much inside curb running through 130R, Gallo’s NSX was fired out to the astroturf on the outside and span. That dropped him to fourth on the road, and he opted to head into the pits to take on the medium tires.

With Gallo effectively out of contention for the podium, the race tilted in an unusual direction. Kokubun and Troncoso were still at the front, but after running deep into the race — nine and eight laps respectively — on soft tires, they soon came under attack from two drivers who’d switched to softs at their stop. With all the mandatory stops completed, it was Kokubun, Troncoso, Inostroza, and defending world champion Takuma Miyazono as the front four, covered by barely a second.

This four-car scrap lasted throughout the entire final five laps — a third of the race distance — with the quartet seeming to shuffle order through each sector. However it was Troncoso’s luck that ran out almost within sight of the checkered flag. Repeating Gallo’s mistake from earlier in the race, Troncoso exited 130R rear-first and fell out of contention.

That left Inostroza to take the win, with Kokubun keeping second despite a tire disadvantage to Miyazono who came home third. 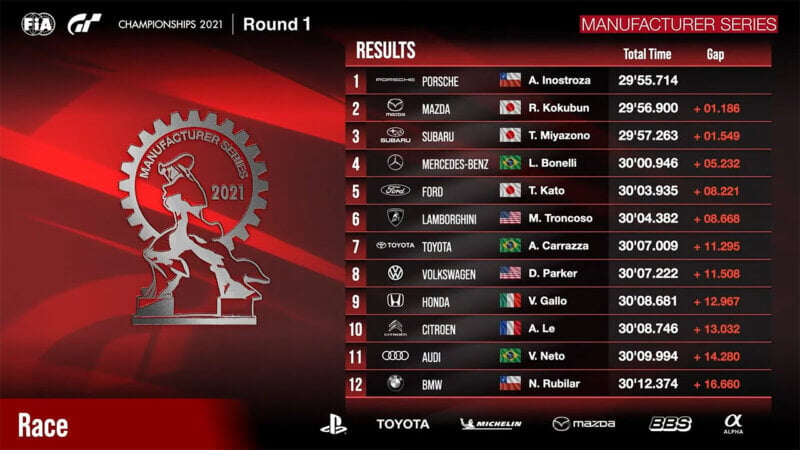 With all drivers now in the Mazda RX-Vision, it was Andrew Brooks who would lead the way from the grid. The Canadian set the fastest time but by the finest of margins; just 0.002s separated Brooks from Brazil’s Adriano Carrazza, with Gallo a tenth further back in third.

Carrazza though was immediately in the wars. Tagged under braking by countryman Luca Bonelli into a door-bang with Gallo, Carrazza emerged practically alongside Brooks through Curva Grande but had picked up a one-second penalty that effectively put paid to his podium chances.

That released the remaining soft tire users — Brooks, Gallo, and Patrik Blazsan — to scamper free at the front, working with each other’s slipstream to break away from the pack behind.

While that looked set to be the story of the race, strategy always comes into play in Nations Cup finals events, and so it proved here. The traditional “one hard lap” tactic — a single lap on the slowest, hard compound — was the method of choice once again, and that meant the three leaders came in at the end of lap 16 of 17 for their final set of tires.

That suddenly brought the rest of the pack, who had used hards early on or for a middle stint, back into play, with third-place Brooks emerging right in front of a full-speed Coque Lopez. The pole sitter did an admirable job to keep the Spaniard behind him for almost the entire lap, but Lopez got enough of a run through Parabolica to cross the line 0.034s ahead — with Miyazono barely a tenth further back in fifth.

With Brooks as an unwilling rear gunner, Gallo and Blazsan were able to keep the front two spots — Gallo just able to fend off Blazsan through Parabolica to score the first three points of the 2021 World Series Nations Cup. 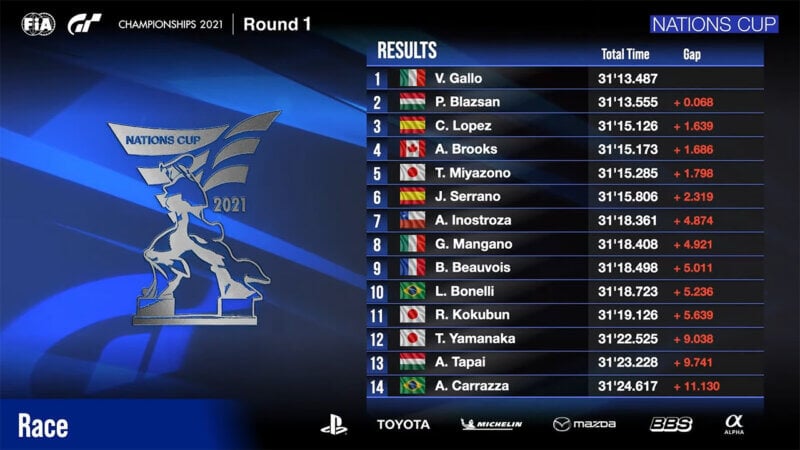 These points will follow the brands and drivers respectively throughout the 2021 World Series and into the World Final at the end of the season, with a maximum of 22 points available before the final.

The second World Series event will take place in July with the same driver fields, and with both of WS1’s races going down to the final corner we expect more exciting racing to come!