The partnership with the famous Swiss watch manufacturer allows Polyphony Digital to integrate TAG Heuer’s Live Timing Technology into the game. This marks the first video game partnership for 157-year old watch maker. Yamauchi had the following to say:

“Tag Heuer who have been making history in partnership with the shining legends of motorsports such as Steve McQueen, Ayrton Senna and Red Bull Racing, is a perfect project partner for Gran Turismo Sport, which aims to redefine the next 100 years of motorsport history. I am certain that the live timing technology of Tag Heuer will bring a level of reality to Gran Turismo Sport equal to the real world motorsport. In addition, this project will be a great opportunity to bring a breakthrough in new technology and design to the future of the Connected watch, which is a crossroad for watches and software technology.” 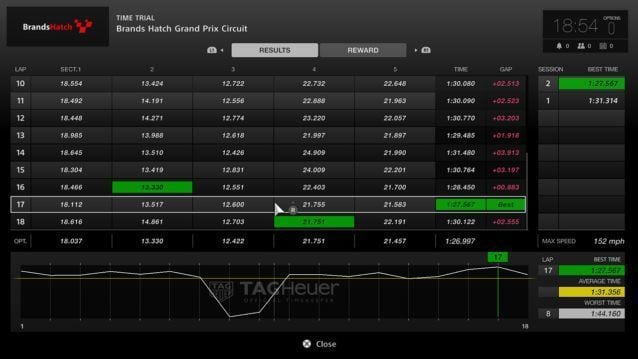 More details over at granturismo.com shed some light on what exactly this collaboration means to players. There is a new look to the timing screen of races, and we get a peak at the new UI offering players the chance to compare and analyze lap times via graph, which is really valuable when chasing better lap times.

The video released also gives us a glimpse into some in-race UI changes. We see the TAG Heuer logo next to the lap timer, the new updated UI now displays the gaps (at each sector) between the car in front as well as displaying the best and last lap times. While we hope this busy interface is user-customizable so players can pick and choose what is shown on screen, all this valuable information on display is very much welcomed and will be helpful during live broadcasts of online races in GT Sport.

One thing this recent influx of news is noticeably lacking is a solid release date. Perhaps we’ll hear more on the subject soon — stay tuned to GTPlanet for the latest GT Sport news.

Gran Turismo Sport is scheduled to arrive later this year on PlayStation 4.

58 Comments
Click here to see the related discussion our forums...