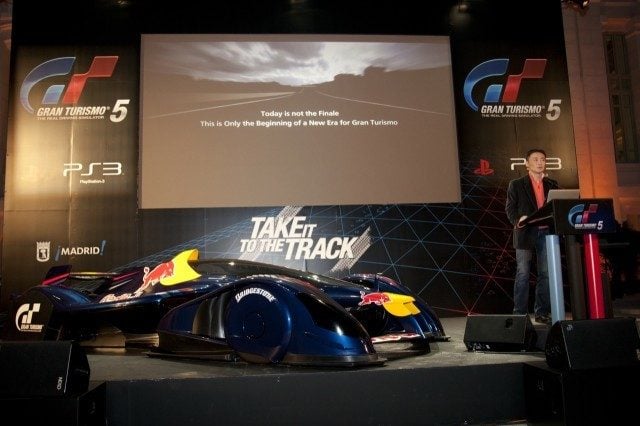 I just got in from the Gran Turismo 5 launch party here in Madrid – packed with media representatives from around the world, it was a fitting way to celebrate the end of GT5’s long and dramatic development. Here’s what I learned:

Take a look at this first batch of pictures from the event – I’ll upload more (along with video) shortly. Tomorrow, I’ll be participating in Kazunori Yamauchi’s first post-GT5 question & answer session. I have a lengthy list of things to ask, but as always I expect our time to be limited and I will prioritize them as best I can. Stay tuned!

Andrew Evans · Nov 24, 2010· Comments
It may be cracking on for a decade old now (yes, really), but Gran Turismo 5 still has a few secrets left to give.

Andrew Evans · Nov 24, 2010· Comments
The Gran Turismo world may be all about GT Sport and esports, but an older title is enjoying a second lease on life right now.

Kyle Patrick · Nov 24, 2010· Comments
No, your eyes do not deceive you. We’re talking about a game that’s fast approaching its ninth birthday. That’s because, thanks to a recent discovery in the community, it’s suddenly gained a huge number of tracks.

Kyle Patrick · Nov 24, 2010· Comments
Another year is wrapping up. We’re mere hours away from 2019, and thus, we’re looking back on what the last 12 months have given us in the gaming world.

Adam Ismail · Nov 24, 2010· Comments
Welcome to Mirror Mode, GTPlanet’s series that shines a spotlight on retro racing games. To commemorate the release of Forza Horizon 4, we’re revisiting another popular racer from Xbox’s past.

Adam Ismail · Nov 24, 2010· Comments
This weekend marks the 86th running of the 24 Hours of Le Mans. It coincides with a pivotal time for the world’s greatest race. Rising costs for the top-level LMP1 prototypes have left Toyota as the only factory-backed entrant in the class. Meanwhile, organizers are busy developing a cheaper and more marketable formula to replace it that would ideally encourage manufacturers to invest again.