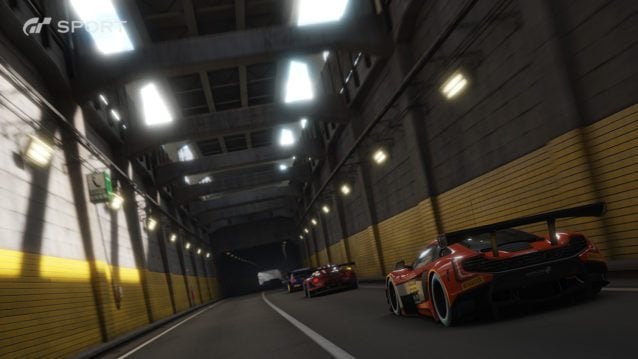 A key area of much discussion in the Gran Turismo series is the quality of audio. Compared to other games in the genre this is an area that GT hasn’t quite met the benchmark for in the past. However, Kazunori Yamauchi has confirmed to GTPlanet that there will be an entirely new system of reworked audio in place for the launch of GT Sport.

Audio is important to a racing simulator for many reasons, with the most obvious reason being immersion. When a car feels like the real thing, looks like the real thing, but doesn’t sound like the real thing it can be pretty jarring. The old system in GT was often coined as being ‘vacuum’-like in that it prioritized wind noise and captured the whirring of an engine over the actual ‘grunt’ many of the world’s supercars are known for. Audio also contributes heavily to the feedback sim racers get back from the car, hearing the intricacies of the engine allows drivers to make important gear changes and understand when the car may be struggling in certain ways. The static engine sounds in previous GT titles didn’t really give any proper feedback and players’ could struggle to read their car as a result.

The prospect of having a new system would allow GT to start again, looking to improve on these sounds and what they bring to the overall experience. With Kazunori himself being a racing driver, he of all people should be able to understand why the fanbase are generally concerned about the current condition of the sound design in the series. Work has already begun to bring the overall sound quality of Gran Turismo Sport to a level alongside competition in the genre. Speaking of the build shown off to fans in the Copper Box Arena Kazunori stated:

“So the system is completely new. But the sound material is not completely changed to the new material. So I think when you listen to some of the cars now, there are some cars that sound really good, and some cars that don’t.”

GTPlanet’s own Jordan Greer felt that the Ferrari 458 Italia in particular sounded very nice with Yamauchi agreeing. He also pointed out that the Lotus Evora was another example of a car which sounded better under the new sound system being implemented on the road to release.

As footage for the newest GT continues to pop up around the web, it would be wise to keep in mind Kazunori’s comments about the new system not being fully completed yet and reserving judgement as such. Through the interview with Polyphony’s president we can see that at least 2 of the cars are currently being put through the new system and we can tell that the team are not sugar-coating how they feel about the current system making note that cars simply don’t sound good. This level of honesty gives hope that moving forward the new system can have the potential to fix an area which has been requiring more attention in recent versions of the series.

Andrew Evans · Jun 2, 2016· Comments
Michelin, official Tire Supplier and Technical Partner of Gran Turismo, is staging a special online competition for players in south-east Asia and Oceania, with an all-expenses paid experience at Yas Marina, Abu Dhabi, for the winner.

Andrew Evans · Jun 2, 2016· Comments
A new set of Gran Turismo Sport Daily Races is now available, with the unannounced change to a four-weekly cycle now seemingly the standard from this point forward.

Andrew Evans · Jun 2, 2016· Comments
Following on four weeks from the last set, a new set of Daily Races is now available in Gran Turismo Sport as players get used to the new scheduling for the 2017 title.

Andrew Evans · Jun 2, 2016· Comments
For the first time in nearly a month, there’s a new set of Daily Races in Gran Turismo Sport for players to enjoy for the foreseeable future.

Andrew Evans · Jun 2, 2016· Comments
It’s the inevitable fate of any game that, once it is succeeded, it will eventually wither away as support is withdrawn. While this process usually takes months at a minimum, GT Sport seems as if it could be sidelined in record time.

Andrew Evans · Jun 2, 2016· Comments
Despite being superseded by Gran Turismo 7, GT Sport’s Daily Races seem to be continuing on their weekly cycle — for the time being at least.

Andrew Evans · Jun 2, 2016· Comments
Although Gran Turismo 7 is now out, GT Sport shows no signs of slowing down any time soon, with a new set of Daily Races now available to players.

Andrew Evans · Jun 2, 2016· Comments
Gran Turismo Sport will finally be superceded by Gran Turismo 7 this week, but there’s still plenty to be getting on with in the current title — starting with a new set of Daily Races.