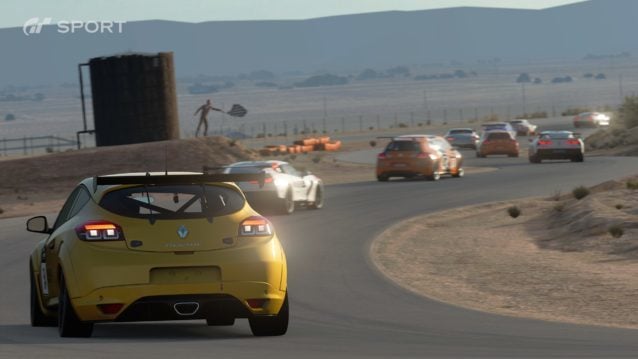 Polyphony Digital has pushed out an update for the Gran Turismo Sport closed beta. The update addresses numerous issues, and weighs in at a whopping 9.8GB.

A short list of patch notes has accompanied the v1.05 update. According to the list, improvements have been made to the physics and force feedback engines, though no specifics were given. The Sportsmanship rating has been corrected in terms of judgement and display, while a set of quick options have been added to the Pause menu.

The big news is a massive expansion of the existing Sport race schedule. Previous versions of the beta limited racing to a few hours each day, but v1.05 has the daily races running almost non-stop. This could mean another expansion into yet more territories, or the ability for Europeans to race against North Americans.

The large download size hints at other hidden content, but what? Last month, the big news was Porsche officially joining the franchise. Polyphony showed off three new circuits shortly after — Blue Moon Bay, Dragon Trail, and Sardegna. Players have already driven two of those new tracks, but Sardegna has only been visible as a replay from the main menu.

Existing beta players have already reported several undocumented changes, such as the inclusion of ghosts in qualifying. The chase cam has also received an update, allowing players to choose its relative stiffness compared to the car’s movements.

Stay tuned to GTPlanet for more news on the GT Sport closed beta.