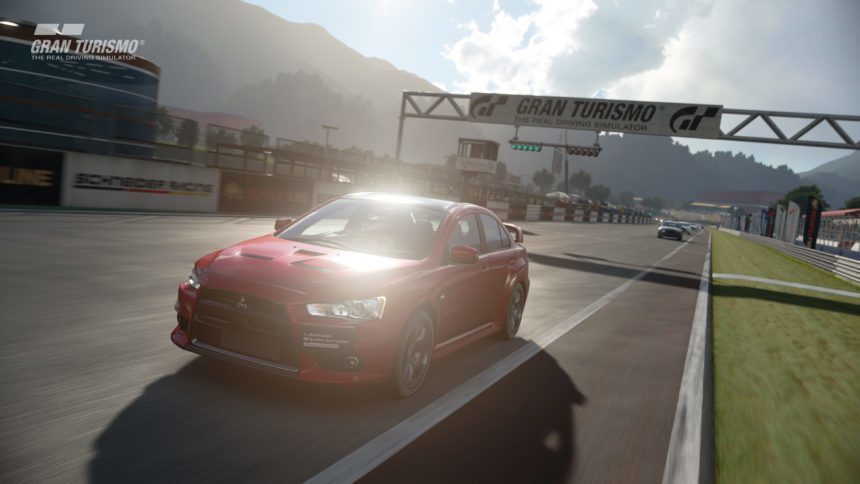 Fresh from the recent deluge of GT Sport content, another gameplay video has given us a first look at one of the game’s new circuits.

It was only yesterday that we learned of the Kyoto Driving Park track. It’s available in two layouts, a simple “Miyabi” form and a more complex “Yamagiwa” version. This video features the Miyabi layout.

It’s a relatively simple circuit that bears more than a passing resemblance to Gran Turismo 4‘s Driving Park Beginner Course. It has the same teardrop shape, but with a couple of subtle differences. The first is a bus-stop chicane soon after the smallest radius corner, rather than midway down the back straight. That back straight has a rather different profile too, with the addition of an S-bend.

From this video it’s not immediately clear how the Yamagiwa layout interacts with the Miyabi version, although the exit of the wider radius 180 degree could be where the two join or split.

The video also gives a closer look at the early parts of the career mode.

It seems that the initial phases of the Driving School are relatively simplistic. The very first lesson involves simply driving a Mazda MX-5 forwards in a straight line — a task the reviewer accomplishes to gold standard with ease. It’s something we’ve seen before in Gran Turismo license tests, and we trust it’ll get a little harder in the other 47 tests!

We get a little look at the Mission Challenge section too. The mission on show involves a cone challenge, as per the Coffee Breaks of Gran Turismo 6. Again, this doesn’t seem too strenuous, but Gran Turismo has had quite the variety of challenges in the past.

The video demonstrates the Circuit Experience area last. This divides each course up into smaller chunks so that the player can learn piece by piece. A final test knits the sections together. It even divides up the Kyoto Miyabi track — to just two sections — although our reviewer struggles to achieve even bronze. This may indicate that it’s a sterner challenge, although the poor lines and patchy throttle use suggest otherwise.

We’ll bring you more news and information on GT Sport as the days tick down to its October release date.

Gran Turismo Sport 522 Nov 30 by Andrew Evans
You’ll be heading to three of the world’s best-known race tracks in this week’s new set of GT Sport Daily Races, as two one-make races headline the offerings for the…

Gran Turismo Sport 522 Nov 23 by Andrew Evans
It’s all about racing cars in this week’s new set of GT Sport Daily Races, as players have a choice between three different types of racing machine. Race A this…