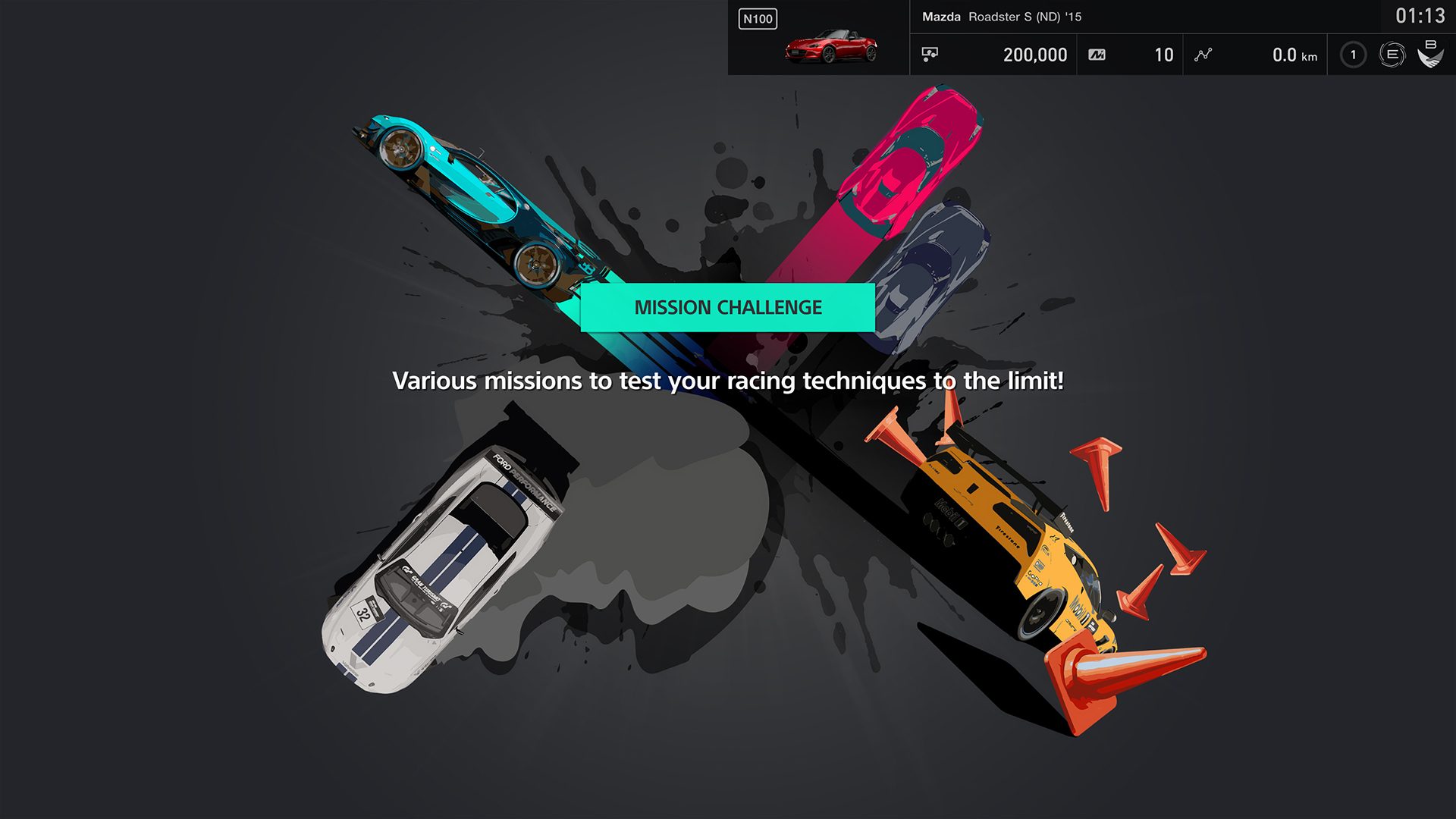 The information comes hot on the heels of today’s other releases, detailing the livery editor and Brand Central, along with fresh car and track images from the latest build.

Driving School is exactly what you’d expect from a Gran Turismo game. It features basic car control challenges and cornering techniques set on short areas of race tracks. Passing each gives a gold, silver or bronze trophy, while passing a block of eight grants an additional award. There are 48 tests in total, split into Beginner and Intermediate groups. 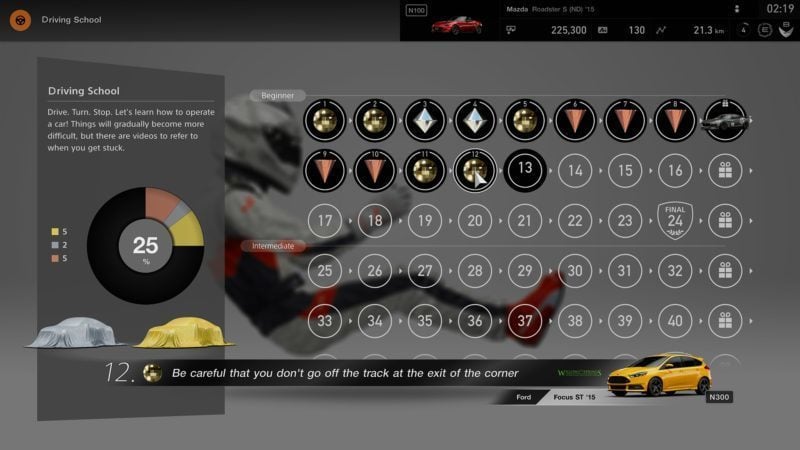 Mission Challenge pits you against AI cars in driving challenges. These are both short sections of track and full lap missions. Again, the game breaks them up into blocks of eight, with a prize for each and 64 tests in total.

Circuit Experience is a way to learn tracks, similar to the challenges in the later stages of Gran Turismo PSP. This area breaks each track up into small sections, allowing you to learn a new circuit in stages. A final test examines your ability to drive the whole circuit. Interestingly, this section of this build includes four new, unknown tracks: Kyoto Driving Park Miyabi; Kyoto Driving Park Yamagiwa; Tokyo Expressway East Outer Loop; and “BB Raceway”. This version of the game renames the existing Tokyo circuit to Tokyo Expressway Central Outer Loop.

Last is the Racing Etiquette section. This isn’t explored in this release, however it appears to be an area that helps teach drivers track courtesy. This should help those with low Sportsmanship Ratings (SR) improve their behavior for online racing! 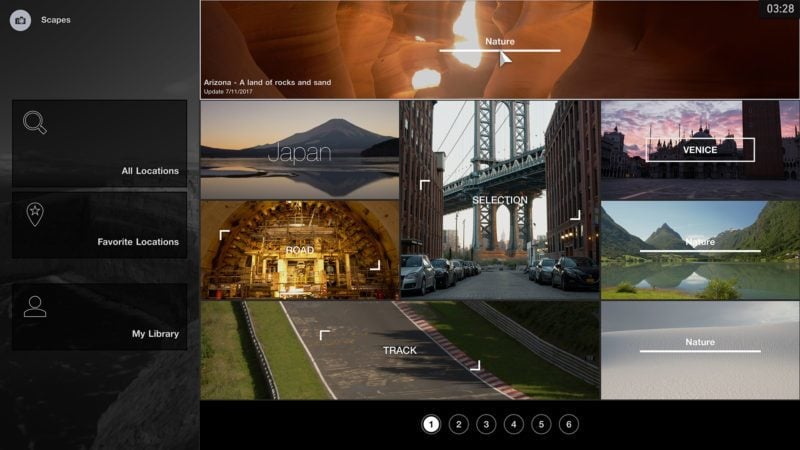 Polyphony Digital used advanced prototype cameras, co-developed with Sony’s photography department, to capture and trace light sources at over 1,000 locations across the world. The Scape section splits these up into specific types, including natural vistas, road locations and race tracks. A special “Editor’s Choice” section includes Scapes that Kazunori Yamauchi — himself a keen photographer — chose as particular highlights.

A new vehicle positioning system allows the player to move the car and change the state of various lights and the steering angle. Camera settings include exposure, aperture, shutter speed and focus. After effects allow you to set film grain, vignette size and strength, and lens distortion and glare. You can even apply filters and color tone correction, or set the car in motion for an action shot within the Scape.

The team also hired the best automotive photographers in the world to refine the Scape system. 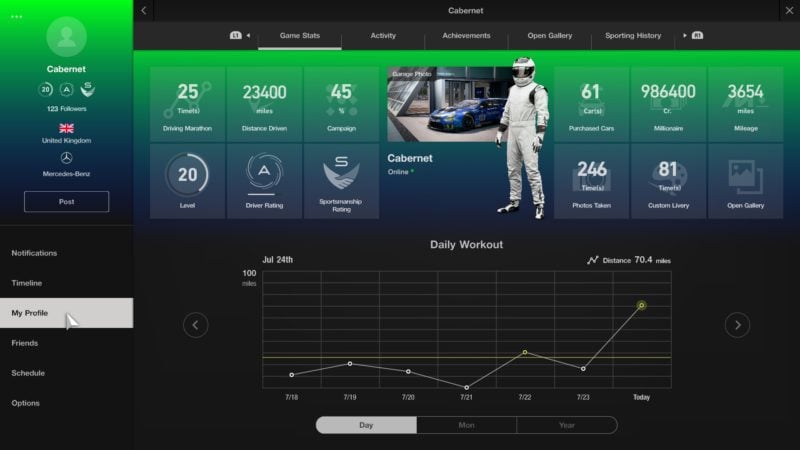 Polyphony also showed details of the social interface for the first time. This area of the game has a public profile for each player. It shows data like Driver Rating (DR) and Sportsmanship Rating (DR), but also percentage completion, cars owned and miles driven. You’ll also find details like how many custom liveries a player has created and see their public gallery. The screenshot also shows a “level” ranking, although it’s unclear what this is for at present.

We’ll bring more details as we get them!

Andrew Evans · Jul 27, 2017· Comments
Michelin, official Tire Supplier and Technical Partner of Gran Turismo, is staging a special online competition for players in south-east Asia and Oceania, with an all-expenses paid experience at Yas Marina, Abu Dhabi, for the winner.

Andrew Evans · Jul 27, 2017· Comments
A new set of Gran Turismo Sport Daily Races is now available, with the unannounced change to a four-weekly cycle now seemingly the standard from this point forward.

Andrew Evans · Jul 27, 2017· Comments
Following on four weeks from the last set, a new set of Daily Races is now available in Gran Turismo Sport as players get used to the new scheduling for the 2017 title.

Andrew Evans · Jul 27, 2017· Comments
For the first time in nearly a month, there’s a new set of Daily Races in Gran Turismo Sport for players to enjoy for the foreseeable future.

Andrew Evans · Jul 27, 2017· Comments
It’s the inevitable fate of any game that, once it is succeeded, it will eventually wither away as support is withdrawn. While this process usually takes months at a minimum, GT Sport seems as if it could be sidelined in record time.

Andrew Evans · Jul 27, 2017· Comments
Despite being superseded by Gran Turismo 7, GT Sport’s Daily Races seem to be continuing on their weekly cycle — for the time being at least.

Andrew Evans · Jul 27, 2017· Comments
Although Gran Turismo 7 is now out, GT Sport shows no signs of slowing down any time soon, with a new set of Daily Races now available to players.

Andrew Evans · Jul 27, 2017· Comments
Gran Turismo Sport will finally be superceded by Gran Turismo 7 this week, but there’s still plenty to be getting on with in the current title — starting with a new set of Daily Races.