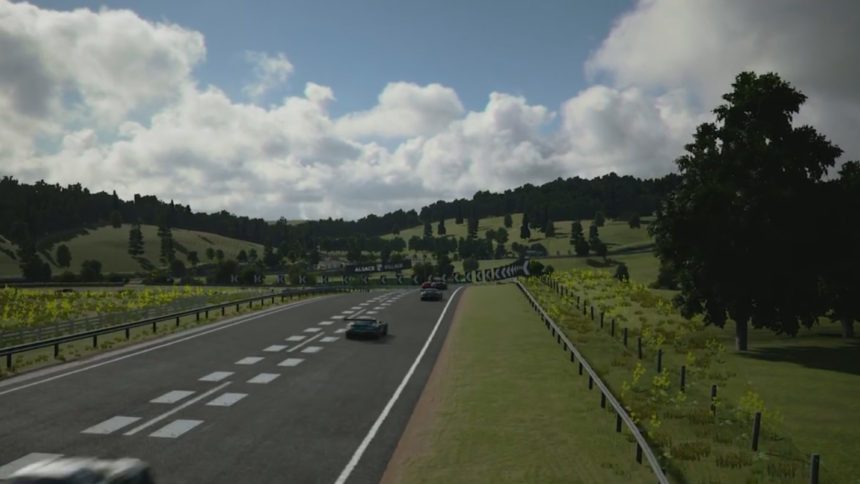 A short video showcasing GT Sport‘s color range has also given us a glimpse of the new Alsace Village circuit.

Although the video deals with why red Ferraris often look orange in photographs, there’s a short piece of footage with the new circuit. There’s not a huge amount to go on, as it’s just four seconds of the video, but we have one or two clues.

Firstly, it’s clearly a street circuit. Although wide, the track has a defined road centerline. The crash barriers are some distance away from the asphalt’s edge, with wide verges. In this respect it’s like a mixture of the Eifel and Mt. Aso course creator themes.

The other thing of note is the topography. The road surface rises and falls with the contours of the land, and some hills are visible in the distance. It’s clear that the circuit is set in the foothills of Les Vosges, rather than the Rhine valley to the east — perhaps near Saverne, or Molsheim to the south.

This region of the world has proven very popular in previous GT games. The Ardennes and Eifel mountains to the north are home to Spa-Francorchamps, the Nurburgring and the Eifel course creator theme. Eiger, Grindelwald and Chamonix lie around 150 miles to the south too.

Meanwhile, Molsheim is the home of Bugatti, a marque that’s been central to GT Sport’s development since the introduction of its Vision Gran Turismo almost two years ago.

You can see the circuit in the video below – but don’t blink, or you’ll miss it.

It might be time to upgrade your monitor: experience true Ferrari Red in wide color. bit.ly/GTSportPreOrder

Gran Turismo Sport 436 Oct 19 by Andrew Evans
After a few complicated races in recent weeks, this week’s new set of GT Sport Daily Races is a return to simpler times. It’s a case of picking how fast…

Gran Turismo Sport 436 Oct 12 by Andrew Evans
A new set of GT Sport Daily Races starts today, with something of a focus on cars with the engine in the middle. There’s three races as usual, with two…